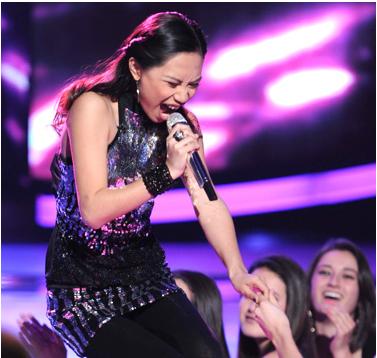 The elimination round begins with the boys singing Stevie Wonder and the girls singing Whitney Houston. I think the boys got the worse end of it — Whitney’s a tough act to follow, particularly since she’s dead, but Stevie Wonder songs were never meant to be sung by anyone but Stevie Wonder. Thing is, he’s a great musician and singer, but a terrible lyricist, so when anyone else does his stuff it can easily sound stupid. And since the guys were weaker anyway, I was worried about a male train wreck of a night.

But it wasn’t that bad. Only a couple of moderately lame performances, and a few really good ones. A couple of the women were a little shrieky and off key, but there were some amazing moments, too.

J-Lo is spectacularly beautiful in a white top and pants. Randy is wearing some kind of odd jacket with what I have to hope is a fake leopard collar and a pin that looks like it’s made of smashed lego or something. Very odd. I don’t get the point.

Joshua does “I Wish.” Meh. Judges liked it, I wasn’t impressed. Too hard a song for the non-Stevies of the world.

Erica, the wild card girl, wearing a dress that looks exactly like the Coke bottles that are everywhere in the background. “I Believe in You and Me.” Best so far; she’s got a great voice and she gives J-Lo “the goosies,” which gets me excited just thinking about it. When I mention that, Vivian says I’m “way too old” to go out with Jennifer Lopez, and that she’d have a terrible time on the date if we ever did. Good to know my daughter has my back.

Colton. “Lately.” Tough start but he pulled it together at the end. The judges loved it. Me and Viv? Meh.

Shannon. “I Have Nothing.” Nice try, but she was so nervous she could barely spit out the words. Deandre, the other wild card: “Master Blaster.” He can whip his hair back and forth, but he didn’t tonight. Viv: Eeew.

Skyler: “Where Do Broken Hearts Go?” One of my faves, going to the top four. Does Whitney like country, and it works. The girl can sing.

Heejun. My Number One. The kid’s really, really funny in a deadpan kind of way. He hands the singing coaches little pics of himself; the one to Jimmy says “I love you.” The one to Mary says “I love you more than Jimmy.” He does “All’s Fair in Love,” and the judges all like it, but it’s almost beside the point. He wins this on personality.

And then Jessica. Whoa. “I Will Always Love You,” and she’s almost better than Whitney. Wow. Amazing. An Idol moment. If J-Lo talks about “the goosies” one more time I’m going to have to leave the room.

Philip Phillips. “Superstition.” Okay, sure. Whatever.