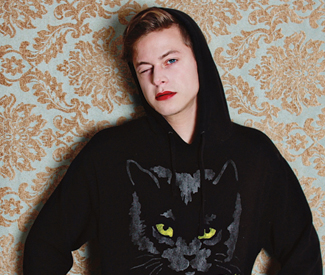 MUSIC At some point in our lives, we all feel lost or confused, like we’re picking up the pieces of our broken selves and trying glue them back together. Rather than surrender, Seattle’s Perfume Genius, aka Mike Hadreas, takes these experiences and turns them into art.

Recorded at his mother’s house after a battle with addiction, Hadreas’ 2010 debut Learning (Matador) was an understated, deeply personal collection of lo-fi piano pop songs that earned him critical recognition and a circle of devoted fans.

For his sophomore album, Put Your Back N 2 It, also on Matador, Hadreas once again found himself navigating the confusing process of recovery. “That wasn’t the plan,” he says. “I didn’t plan after the first album like, ‘ok, now I’m gonna do round two and then I’ll make another album.’ It just unfortunately worked out like that.”

No one was more surprised than Hadreas that Learning was so readily embraced, but this time around he wrote with an audience in mind. “At first I was thinking about everyone, and that I had to make something that everyone would like,” says Hadreas. “But that was too crippling, so I started thinking about who I wanted to hear the songs, people in my life that I wanted to make songs for, and kids that wrote me from the first album. I didn’t expect to have a career [and] now I feel really purposeful.”

It’s for this reason, perhaps, that a resolute strength and optimism run through his second batch of songs. “I will carry on with grace / Zero tears on my face,” Hadreas sings on “No Tear.” There’s redemptive healing and an almost gospel quality to Put Your Back N 2 It. “I’ve always been kind of scared of religious or spiritual music because I thought most of the religions weren’t going to let me sing with them,” he explains.

“I just really didn’t get it, to be honest,” he says. “The actual ad itself was really sweet and tame. But I think everybody’s happy now because way more people saw the ad than if it would have just gone through.”

Hadreas is adorably timid when he talks about his music, yet fearless in his approach to songwriting. “Whatever fears I have, when I’m actually doing something I try to get over it, at least for that moment,” says Hadreas. “Even if I still struggle with confidence, I try to do that with my daily life and not when I have to make something.” Due in large part to studio recording, Hadreas sounds more confident here. His vocals ring out with clarity and his once subdued piano-driven arrangements are lush and expansive.

“Dark Parts,” which soars triumphantly over the galloping thump of a bass drum, is the album’s most hopeful track. “I will take the dark parts of your heart into my heart,” he sings as it concludes. It’s a promise that captures the deep connection he shares with fans, who he regularly thanks for the letters they send. “I haven’t been very helpful my whole life, really, until this. I was mainly just apologizing for 20 years,” he says. “Whatever bullshit I still have, when I read those messages, it makes me remember why I’m doing all the things that I’m doing.” *