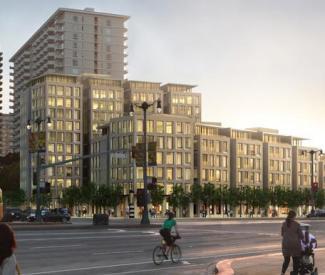 The urban planning disaster that is 8 Washington goes before the San Francisco City Planning Commission March 8 amid a long list of questions — including Mayor Lee’s position on the project and how it could screw up the America’s Cup.

Developer Simon Snellgrove wants to build the most expensive condos in San Francisco history on the waterfront, 145 units that will be far out of reach to anyone who makes less than half a million dollars a year. And many of the units will require income far higher than that. It’s not just housing for the 1 percent; it’s housing for the top half of the 1 percent.

There’s no need for this kind of housing in SF; the very rich have no problem finding places to live. And the spot zoning violates every standard of good waterfront planning practice.

The project will benefit the Port of San Francisco, which stands to take a cut of the money since some of the project is on Port land. But more than half of the land is owned by Golden Gateway and is a former redevelopment area, so the supervisors and the Port are going to have to fight over who gets the property tax increments and how that’s all financed.

More interesting, 8 Washington will be a boon to Golden Gateway, which as the landowner is a partner in the deal. And Golden Gateway is one of those big properties that are paying far too little in city taxes. When the complex changed hands several years ago, the owners used a stock-swap deal to transfer it, avoiding the Prop. 13 reassessment that could have substantially raised its taxes. So the city’s losing millions of dollars — and now Timothy Foo, who is the principal owner of Golden Gateway, will be getting a nice favor from the city he’s been screwing.

Oh, and by the way — a lot of Golden Gateway units are being advertised as short-term (that is, hotel) rentals — something that violates at least the spirit of city law. This is an outfit that deserves special zoning treatement from San Francisco?

Then there’s the fact that this could be a serious problem for the big America’s Cup party. Project critic Brad Paul has been analyzing the impacts of the development, and noticed some new language in the comments and responses to the Environmental Impact Report suggesting that excavation could lead to something like 200 dump-truck trips a day along the Embarcadero — roughly one trip every two minutes. In an email to Paul, Paul Matltzer in the Planning Department confirmed that the likely construction process could, indeed, involve that many dump trucks, rumbling along the Embarcadero during the peak construction period, which will also be the peak period for America’s Cup tourism.

Dump trucks, Paul (who used to drive one) notes, start slowly and brake slowly. The Embarcadero is already crowded — and will be far more crowded during the Cup races, so much so that city officials are thinking of closing traffic lanes to all but bicyles and transit. How, exactly, will that work out with 200 trucks a day fighting for room?

I’ve called and emailed the America’s Cup people, but they haven’t gotten back to me. I’ll keep you posted.

Lee’s office hasn’t gotten back to me, either, but I’m hearing that the mayor is telling people he hasn’t made up his mind — on a project that’s a week away from the Planning Commission and that one of his close allies, Rose Pak, is strongly promoting.