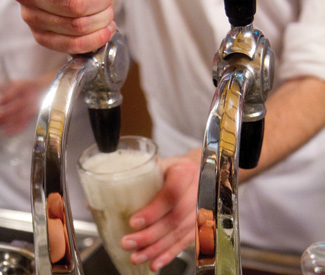 APPETITE I was born of another time. As much as I wouldn’t trade the rights and access of today, I hunger for the romance, artistry, and intellectual pace of eras gone by. As a child, I grew up on classic films and whitebread shows like Father Knows Best, where youth hung out at soda fountains listening to the jukebox. Naturally, I was delighted upon hearing a retro-inspired soda fountain was opening near my home.

Cole Valley’s new Ice Cream Bar and Soda Fountain is no 1950s milkshake time capsule. Blonde wood ceiling, restored 30s bar (which owner Juliet Pries found in Michigan), illuminated art deco signs, all evoke a glowing past. Soda fountains filled a communal void in the wake of Prohibition and thus were popular in the ’20s and ’30s. But they date back to the 1800s when, similar to pharmacies where signature bitters like Peychaud’s were created, effervescent mineral waters were considered to have healing properties.

Soda fountain revivals and techniques are popping up around the US: however, I have yet to see this level of detail and historicity anywhere. Bartender Darcy O’Neil’s book Fix the Pumps (Art of Drink, 2010) is responsible in part for the inspiration behind Ice Cream Bar. Bartender Russell Davis of Rickhouse, www.rickhousesf.com, developed the soda fountain program, sourcing data not only from O’Neil’s book, but from 1894’s Saxe’s New Guide or, Hints to Soda Water Dispensers by D.W. Saxe. (Read my revealing Q&A with Davis here.)

After trying most of the menu over multiple visits, I can’t help but gravitate to the wild cherry phosphate ($7) time and again. Rather than saccharin cherry flavor, it tastes of fresh, wild cherries, in a house syrup and cherry bark tincture, fizzy with acid phosphate and soda water. Another highlight is Ode to Mr. O’Neil ($8), a tribute to Darcy. Like an elevated Brooklyn egg cream, it’s a lactart made with lush Scharffen Berger chocolate syrup and double-charged soda imparting a piquant effervescence.

I wished to taste more pink peppercorn in the pineapple-based My Girlfriend’s Girlfriend ($7) and more tobacco in the chai-dominant Passion Project ($7.50), both lactarts. Yet all-in-all, each visit yields very few disappointments. Splurge on the decadent pistachio milkshake for two ($16), or go earthy-sweet with Touch of Grey ($10), a candy cap mushroom phosphate.

Though it’s about to launch a casual menu of soups, grilled cheese sandwiches, egg and chicken salads, and the like, plus baked goods, house brittles, toffee, and hard candies, there’s currently more than the soda fountain to draw you out. The ice cream is of unexpectedly high quality, overseen by Ray Lai, who worked at Bi-Rite (www.biritecreamery.com) and Fenton’s (www.fentonscreamery.com).

The jerks are a delightful team assembled from various bars, offering earnest, knowledgeable service. Tell them a flavor you’d like from the house tinctures and syrups (grapefruit to dill weed), and they’ll make you a custom drink.

Sipping a custom mint egg cream at the soda fountain while listening to big band tunes is a respite I relish whether midday escape or evening dessert. Crowds of Cole Valley strollers and families abruptly bring me back to today, but, then, it’s fair to say there is something appealing for everyone, child to adult, at this already widely embraced neighborhood hangout. *