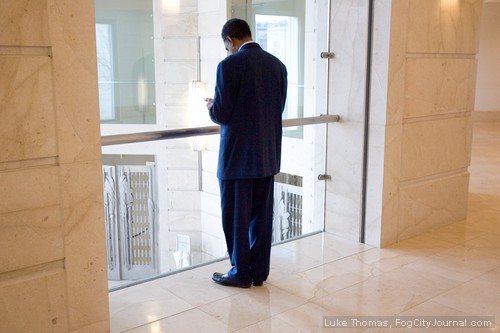 A jury awarded the City and County of San Francisco $24,498 yesterday following its deliberations of a complicated civil case filed by the city in 2003 against a minority-owned computer services company accused of fraud and breach of contract, a company that countersued with a claim of being harmed by top city officials.

But that paltry sum and the jury’s verdict of shared responsibility in failing to root out corruption in city government belied the more politically significant accusations made through depositions in the case that Mayor Ed Lee and former Mayor Willie Brown overrode city staff to give contracts to a “fraudulent” yet politically connected company, which proved to be a tangential issue that was left largely unexplored at trial.

In CCSF vs. Cobra Solutions, the jury found that both the city and Cobra Solutions failed in their responsibilities to prevent a former Department of Building Inspection information technology manager, Marcus Armstrong, from fraudulently bilking the city out of at least $482,000 between 1999 and 2001. An alleged Armstrong accomplice, Government Computer Sales, Inc. – which witnesses said Brown and Lee improperly certified, and which they say they don’t remember – fled and was never brought to justice.

Cobra Solutions, which was awarded master contract status in 1998, was bound by a provision in its agreement with the city that required Cobra to “supervise” sub-contractors. The allegation of fraud against Cobra, however, was effectively dropped from the city’s complaint, but not until the end of the trial when consideration of fraud was omitted from the city’s closing arguments.

Following the verdict announcement, a juror who did not want to be identified, said there wasn’t a single piece of evidence that was most compelling, but that, “the city proved its case. Cobra failed to prove its case.” The “vast majority” of jurors shared that opinion, the juror said. “It wasn’t even close.”

“The jury thought there was obviously a failure to supervise,” the juror continued. “[Cobra Solutions] took on work without even knowing who the party was that was working for them. Who was Monarch?”

Several invoices from Armstrong’s phony companies contained different addresses that the juror described as “a bit of a red flag.”

Cobra had sought damages for breach of contract (the city’s failure to pay monies owed Cobra) and due process violations in connection with the city’s alleged debarment of Cobra from doing further business with the city.

Asked about the issue of sub-contractor supervision, Brady said, “I don’t think anybody could supervise a con man and the city was negligent in hiring this guy – they wouldn’t even bring him in the courtroom – so it’s just betrayal. And it’s a sad day that you hire con man and you won’t take any responsibility for his actions and you blame the small business. That’s not the American way.”

On the jurors finding that Cobra was not intentionally or defacto debarred from doing further business with the city, Brady said, “I think they got it wrong. I have no doubt about that.”

“The jury missed a lot of important facts,” said Mr. Brady’s wife, Deborah Brady, a co-founder of Telecon, the parent company of Cobra Solutions. The city had originally sued Telecon in its case-in-chief, but pursued no claims against Telecon at trial. “I don’t know how they missed them, but they missed them.”

Ms. Brady said the city gave another company, Desktop, the opportunity to defend itself against debarment, but “they never gave us that opportunity.”

“Judith Blackwell, she told the whole story in terms of Monique Zmuda saying they wanted us out, that we’re crooks,” Ms. Brady continued. “They accused us… and never gave us the opportunity to respond, ever.” Monique Zmuda is the deputy City Controller.

“I feel really betrayed by a city that I used to really love and [City Attorney] Dennis Herrera, who is our private attorney, betrayed us,” a tearful Ms. Brady said. “Ed Lee, who claims he barely knew us, betrayed us. Ed Harrington? I don’t know what that was all about, or Monique Zmuda… but Ed Lee and Dennis Herrera, they let down really good people who used to live in this city and loved this city and did all that we could to do good in the community and this city. “

“So I pretty much call it, ‘The City of Betrayal.’”

Cobra’s lead counsel in the case, Whitney Leigh, told us, “The jury made its decision. We’re concerned that the jury was allowed to find that Cobra could have breached the contract by refusing to submit to an audit by the City Attorney. So we believe there are some issues that need to be researched, so we’ll be looking at those issues.”

Asked if there would be post-trial motions, Leigh said, “Post trial motions and/or appeal.”

“Obviously we’re disappointed,” Leigh added, “but we’ll review the transcripts and see what options are available.”

Because of the possibility of an appeal, Herrera was unable to comment on the verdict or to discuss city’s costs in trying the case, said Herrera spokesperson Matt Dorsey.