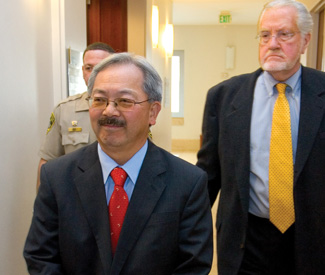 A complicated civil lawsuit alleging corruption and fraud and involving several prominent current and former city officials — including Mayor Ed Lee, who took the witness stand to discuss actions he took as city purchaser a decade ago — could end up costing city taxpayers as much as $10 million.

City and County of San Francisco vs. Cobra Solutions and Telecon was being deliberated by jurors in Superior Court at press time. It centers on a fraud and kickback scheme engineered by convicted felon Marcus Armstrong, a former Department of Building Inspection information technology manager who bilked the city out of at least $482,000 between 1999 and 2001 (see “Dirty Business,” 2/8/11). His scheme was exposed by an FBI investigation following a whistleblower’s complaints in September 2001 that sub-contractors were not being paid.

The City Attorney’s Office accused Cobra Solutions of participating in Armstrong’s fraud, but Cobra’s owners denied being part of the scheme and they say their business was wrongfully damaged when their contracts were frozen by city officials.

Armstrong created two phony companies, Monarch Enterprises and Mindstorm Technologies, and ordered master contractor Cobra Solutions to use the phony sub-contractor companies to provide technology services to the city’s Computer Store (a list of approved contractors) under an agreement awarded to Cobra by the Committee on Information Technology (COIT). It also partnered with another company alleged by the city to be fraudulent, Government Computer Sales, Inc. (GCSI), whose principals fled and whose whereabouts are unknown.

Cobra Solutions founder and president James Brady had raised questions about Armstrong as early as 2000, questions that triggered an unfruitful investigation by the city. Brady maintained in court testimony that Cobra, unaware of Armstrong’s fraud, relied on him to sign off on work services that Armstrong’s phony companies were supposed to have supplied to the city.

The Computer Store was set up by then-Purchaser Ed Lee under the administration of then-Mayor Willie Brown to centralize technology procurement across departments. Now-Mayor Lee was deposed in the case and called to the witness stand on Feb. 6, where he said he awarded Cobra Solutions the highest-rated ranking among several vendors being evaluated by COIT for master contract award status. Each of the other city evaluators, including Deputy Controller Monique Zmuda, also ranked Cobra the top service provider.

According to Armstrong’s guilty plea agreement, GCSI partnered with Armstrong to defraud the City out of $240,000. Deborah Vincent James — then-director of COIT and now deceased — testified in a pre-trial deposition that GCSI was “fraudulent,” that city staffers recommended against certifying the company, and that it was only awarded master contract status because of its political ties to Brown, who directed Lee to overrule the staff recommendation. In his deposition, Lee claimed he could not remember GCSI.

Vincent-James and former Purchasing Directory Judith Blackwell forwarded whistleblower complaints about GCSI to the City Attorney’s Office in early 2001, but neither that office nor the Controller’s Office acted on the complaints until GCSI had gone bankrupt and GCSI’s owners, two foreign nationals, had disappeared.

Of note, Lee was not questioned about his and Brown’s involvement in awarding GCSI its master contract status in 1998. Time restrictions placed on attorneys by Judge James McBride limited the scope of witness examinations, so the most politically explosive charges went largely unexplored in court.

The city completed a subsequent investigation in January 2003 that resulted in stopped payments to Cobra, contract termination, and the city’s civil lawsuit filed by City Attorney Dennis Herrera against Cobra in April 2003. Following Herrera’s filing against Cobra, Herrera demanded an audit of Cobra which Cobra refused, citing a conflict of interest. Herrera had previously represented Cobra in private practice before he was elected City Attorney in 2001.

A trial court ruled in that Herrera had a conflict of interest, disqualifying Herrera and his office from participating in the Cobra case, a ruling later upheld by the California Supreme Court. Yet the suit alleges Herrera and his office continued to supply work to various City agencies and to effectively prevent Cobra from doing further business with city. By withholding the $2 million Cobra was owed by the City, COIT was able to disbar Cobra from entering into master contract agreements with the city, claiming Cobra was fiscally “non-responsible,” according to court testimony.

Blackwell, in her testimony at trial, said the determination of Cobra’s non-responsibility was used as a “pretext” for Cobra’s disbarment, a procedure that should have triggered a hearing to allow Cobra to defend itself against debarment. That never happened.

An FBI investigation into Armstrong’s kickback scheme resulted in Armstrong pleading guilty to mail fraud, wire fraud, and obstruction of justice in July 2003. No criminal charges were ever brought against Cobra Solutions or Telecon and yet the city’s outside law firm, Cotchett, Pitre & McCarthy LLP, which tried the case on behalf of the city, held on to the city’s allegation of fraud committed by Cobra and Telecon throughout the case and trial until closing arguments on Feb. 9.

In his closing arguments, attorney Ara Jabagchourian made no mention of Telecon, effectively dropping the city’s claims against Telecon, and constricted the city’s damage claims against Cobra. He asked the jury to award the city up to $266,000, money paid to Cobra for work authorized and signed-off by the city, via Armstrong, for breaching a provision in the contract agreement between the city and Cobra that requires the master contractor to “supervise” sub-contractors.

But Cobra’s lawyers — the firm of Gonzalez & Leigh, which includes former Board of Supervisors President Matt Gonzalez, who took a leave from his current job as deputy public defender to consult on the case — says it is the city that should pay for fatally harming a business without just cause.

“The City and City Attorney’s office falsely accused Cobra and Telecon of stealing $2.4 million dollars from the City, destroying these companies and ruining the lives of good, decent people who were the victims of a city tech official who should not have been hired in the first place,” said attorney Whitney Leigh. “Then the City Attorney made it worse, flatly defying an order disqualifying the City Attorney’s Office and instead driving efforts to run Cobra and Telecon out of business just because Cobra raised the issue of the conflict of interest. I’ve been unable to find any case in which an attorney has so flagrantly ignored a disqualification order.”

Herrera can’t comment on the case, but his office previously told the Guardian, “Immediately upon discovery of Cobra’s role, the office screened Herrera off from further involvement in the investigation and all matters related to it in accordance with a stringent ethical screening policy Herrera established when he took office.”

“In the case of Marcus Armstrong, the control within the city failed and the control within Cobra failed,” Harrington, now head of the San Francisco Public Utilities Commission, told the court. “We had both controls in place. If they had worked, the city would have been protected. Both failed.”

Cobra is seeking damages for breach of contract (the city’s failure to pay monies owed Cobra), and civil rights due process violations in connection with the city’s apparent conspiracy to bar Cobra from doing further business with the city.

A business valuation expert testified Cobra Solutions was valued between $5.2 million and $8.8 million based on future lost profits from the city’s debarment. With attorney fees and court costs, the city could be on the hook for as much as $10 million.

The city has subsequently established more stringent controls as it relates to the authorization of work assigned to master contractors and sub-contractors. The jury was expected to resume deliberations on Feb. 14 and deliver its verdict by week’s end. Check the SFBG.com Politics blog for the latest.