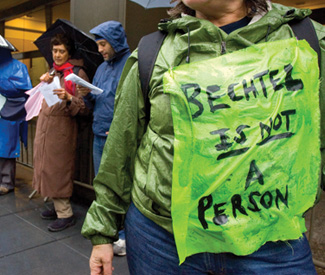 Protesters from the Occupy movement and beyond gathered in front of the Ninth Circuit Court of Appeals in San Francisco on Jan. 20, calling for the adoption of a 28th amendment to the U.S. Constitution aimed at refuting the idea that corporations should have the same rights as people, a legal doctrine know as corporate personhood.

The event was part of a day of action at courthouses around the country, seeking to raise public awareness about the unfettered influence of corporate money in U.S. elections and draw attention to the second anniversary of the landmark corporate personhood decision by U.S. Supreme Court, Citizens United vs the Federal Elections Commission.

“We are here not to protest, not to petition, and not to plead, but to proclaim a truth that should be self evident, even to the Supreme Court: Corporations are not people; money is not speech,” said Abraham Entin, of North Bay Move To Amend, addressing a crowd gathered at the courthouse. “Corporations work very hard to convince us that we cannot do without them and the products they produce. They tell us they are too big to fail, and that our survival is dependent on their survival … Occupy has changed all that.”

In a contentious 5-4 ruling handed down on Jan. 21, 2010, the Citizens United case solidified the legal framework that bequeaths corporations the same rights under the Constitution as real, living, breathing, U.S. citizens, and by merit of their First Amendment rights as citizens bars any restrictions placed on a corporation’s ability to spend money to influence elections.

When Republican presidential candidate Mitt Romney famously said on the campaign trail that “corporations are people, my friend, because corporations have people inside them,” he is reflecting the logic of the majority opinion in the Citizens United case. The court’s majority asserted that corporations are essentially an association of people and thus enjoy the same rights as individuals.

The court also claimed that it is impossible to distinguish between the corporate media outlets and other corporate speech, so all corporations should enjoy the free speech rights saved for the press. Furthermore, because journalists often have to spend money to achieve speech, money spent on messaging by all corporations represents protected speech.

Corporations, a relatively modern invention, aren’t actually discussed in the Constitution. But the notion of corporation personhood began around 1886 in the case of Santa Clara County v. Southern Pacific Railroad. What Citizens United did was equate corporate money spent to influence elections with protected political speech, upending attempts at election reforms and gutting the McCain-Feingold Act of 2002 that regulated federal election campaigns.

That corporations act to corrupt our democratic systems for their own profit is not conspiracy, it’s simply a byproduct of what they are. Corporations are legally obligated to act to maximize their profits for the benefit of their shareholders, otherwise their board and corporate officers are considered negligent of their obligations to their shareholders’ financial interests. Unlike journalists, whose professional credo calls for fairness and acting in the public interest, corporations are designed to act in their own interests.

As Justice John Paul Stevens wrote for the dissenting judges in Citizens United, “Corporations have no consciences, no beliefs, no feelings, no thoughts, no desires. Corporations help structure and facilitate the activities of human beings, to be sure, and their ‘personhood’ often serves as a useful legal fiction. But they are not themselves members of ‘We the People’ by whom and for whom our Constitution was established.”

The resulting flood of corporate money into election campaigns since the court’s ruling is delivered through an aqueduct known as the Super PAC (political action committee). In the wake of Citizens United, election spending by Super PACs in the 2010 midterm elections exceeded $300 million dollars, more spending than the overall spending in the previous five midterm elections combined.

Unlike donations to campaigns, which so far remain regulated, Super PAC money is spent directly by the Super PAC, and can be spent attacking as well as supporting candidates, leading to fears that corporations can exert influence on incumbents before a re-election campaigns by threatening to spend money attacking them in the upcoming election cycle.

“Corporations are human creations, state creations, legal entities … There is no reason we cannot limit their spending,” said Carlos Villarreal, executive director of the National Lawyers Guild’s Bay Area chapter. “Nonprofit organizations are limited in their political spending. Churches and charitable organizations are also limited in their spending. So why not for-profit corporations?”

Perhaps no group knows more about government limits to free speech than participants of the Occupy movement. Elastic restrictions on individual free speech and freedom of association rights spelled out in the First Amendment, resting on alleged risks to health and public safety, have led to Occupy encampments across the nation being restricted and evicted, at times enforced by brutal police crackdowns.

The right of the government to restrict individual and group speech that officials believe represents a clear and present danger was established by the Supreme Court in the 1919 Schenck v United States case — the famous “don’t yell fire in a crowded theater” case. What is not widely known is that this case was a re-examination of the famous 1917 Espionage Act. The “crowded theater” was our nation’s entry into World War I, and those being jailed for “yelling fire” were labor organizers and pacifists expressing their opposition to our entry into the war.

Relying on Schenck, courts have consistently defended restrictions on individual free speech when there is a compelling interest to public safety, the so-called “clear and present danger” standard. Villarreal and the crowd gathered before the Ninth Circuit asserted that corporate influence in our democratic processes represents a clear and present danger to society. “There is no more compelling interest than protecting democracy,” said Villarreal.

Despite the apparent double standard, legal experts say the courts action in the Citizens United case leaves a constitutional amendment as the only avenue left for regulating corporate money in elections and ending corporate personhood, but the movement to take on that Herculean task has already begun.

U.S. Sen. Bernie Sanders (I-VT) and Rep. Ted Deutch (D-FL) have introduced legislation proposing a 28th Amendment to the Constitution. While the language differs from another amendment presented by the group Move to Amend, it also takes aim at ending corporate personhood.

“Two years ago, the United States Supreme Court betrayed our Constitution and those who fought to ensure that its protections are enjoyed equally by all persons regardless of religion, race or gender, by engaging in an unabashed power-grab on behalf of corporate America,” Sanders wrote in a Jan. 20 Guardian(UK) column.

In Sanders’ home state of Vermont, the state Senate is also considering a resolution calling for a constitutional amendment against corporate personhood. A similar resolution, authored by Alix Rosenthal, was adopted by the San Francisco Democratic County Central Committee during a special meeting on Jan. 21. There was just one dissenting vote, and DCCC members say they plan to push for the state party organization to also adopt the stance.

The hurdles set forth to amend the U.S. Constitution, outlined in Article V, are substantial. In order for an amendment to even be considered, a super majority of both houses of Congress must initiate the process, or two-thirds of states must call for the amendment. Proposed amendments passing this threshold are then adopted only after three-quarters of state legislatures ratify the proposed amendment. But that difficult road is one the protesters said they are ready to travel. “We are here on a rainy day with warm hearts and wet feet. We are the 100 percent, the humans. No corporation has every experienced the thrill of wet feet,” said Gangs of America author Ted Nace. “We are the fools who go out on a wet day to fix a broken world. Eighty percent of the public want to fix this. That means we are halfway to our goal. What remains is organization, mobilization.”