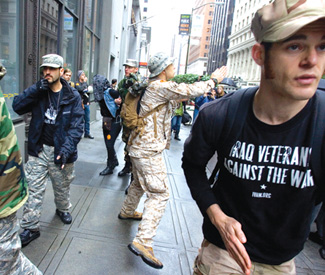 On Jan. 20, hundreds of activists converged on the Financial District in a day that showed a reinvigorated and energized Occupy movement.

The day of action was deemed “Occupy Wall Street West.” Despite pouring rain, the numbers swelled to 1,200 by early evening.

Critics have said that the Occupy movement is disorganized and lacks a clear message. Some have decried its supposed lack of unity. Others have even declared it dead.

But the broad coalition of community organizations that came together to send a message focused on the abuses of housing rights by corporations and the 1 percent sent a clear message:

The movement is very much alive.

Protesters packed the day with an impressive line-up of marches, pickets, flash mobs, blockades, and everything in between.

The action began at 6:30 a.m., when dozens chained and locked themselves together, blocking every entrance to Wells Fargo’s West Coast headquarters at 420 Montgomery Street. The bank didn’t open for business that morning.

Another group of protesters did the same thing at the Bank of America Building around the corner. A dozen blockaded one of the bank’s entrances from 8:30 a.m. to 6 p.m., preventing its opening. A group organized by Act Now to Stop War and End Racism (ANSWER) closed down the Bank of America branch at Powell and Market for several hours.

The Bank of America branch at Market and Main was also closed when activists turned it into “the Food Bank of America.” Several chained themselves for the door, while others set up a table serving donated food to hundreds of people.

Meanwhile, activists with the SF Housing Rights Coalition and Tenants Union occupied the offices of Fortress Investments, a hedge fund that has overseen the destruction of thousands of rent controlled apartments at Parkmerced. Direct actions also took place at the offices of Bechtel, Goldman Sachs, and Citicorp.

A group of about 600 left from Justin Herman Plaza at noon and marched to offices of Fannie Mae, Wells Fargo, and the Immigration and Customs Enforcement Agency (ICE) in a protest meant to draw attention to housing and immigrant-rights issues.

“It’s not just a corporate problem. The government has been complicit in these abuses as well,” said Diana Masaca, one of the protest’s organizers.

Another 200 participated in an “Occupy the Courts” action at the Ninth Circuit Court of Appeals, in protest of the Citizens United Supreme Court decision and corporate personhood.

Exhausted, soaked protesters managed to keep a festive spirit throughout the day, with colorful costumes, loud music, and glitter — lots of glitter.

The Horizontal Alliance of Very Organized Queers (HAVOQ) and Pride at Work brought the sparkly stuff, along with streamers and brightly colored umbrellas, to several different actions. Many painted protest slogans onto their umbrellas, proclaiming such sentiments as “I’ll show you trickle down” and “Not gay as in happy, queer as in fuck capitalism.”

According to protester Beja Alisheva, “HAVOQ is about bringing fabulosity to the movement with glitter, queerness, and pride. All day we’ve been showing solidarity between a lot of different types of oppression.”

There was also the Occupy Oakland party bus — a decked-out former AC transit bus — and carnival, a roving party that shut down intersections and bank entrances in its path while providing passengers a temporary respite from rain.

The Brass Liberation Orchestra, a radical marching band that has been energizing Bay Area protests for a decade, showed up in full force with trumpets, drums, trombones, and a weathered sousaphone.

The Interfaith Allies of Occupy also used horns to declare their message. About 30 participated in a mobile service, sounding traditional rams’ horns and declaring the need to “lift up human need and bring down corporate greed.”

Said Rabbi David J. Cooper of Kehela Community Synagogue in Oakland: “Leviticus 19 says, do not stand idly by in the face of your neighbor’s suffering. Well, we’re all neighbors here. Ninety-nine percent of us are suffering in some way, economically or spiritually. And maybe that number is 100 percent.”

A coalition called Occupy SF Housing called for and organized the day of action, but the messages ranged from environmental to anti-war to immigrant rights.

Many groups did focus in on housing-related issues — and a takeover of a vacant hotel building stressed the urgency and need to house homeless San Francisco residents.

Housing protests included an anti wage-theft occupation led by the Filipino Community Center and the National Alliance for Filipino Concerns at the offices of CitiApartments, an action at the offices of Fortress Investments to demand a halt to predatory equity, and an “Occupy the Auction” demonstration in which protesters with Occupy Bernal stopped the day’s housing auction (at which foreclosed homes are sold) at City Hall.

“A lot of the displacement in this city is happening because of banks and because of things that are out of peoples’ control,” said Amitai Heller, a counselor with the San Francisco Tenants Union. “People will live in a rent controlled apartment for 20 years thinking that they have their retirement planned. A lot of the critiques of the movement are, if you couldn’t afford it you should move. But these people moved here knowing they could afford it because of our rent controls.”

Most of the early protests drew a few hundred people. But when the 5 p.m. convergence time rolled around, many people got off work and joined the march. A rally at Justin Herman Plaza brought about 600; by the time the march joined up with others at Bank of America on Montgomery and California, the numbers had doubled.

The evening’s demonstration, deemed “liberate the commons,” was also more radical than other tactics throughout the day; organizers hoped to break into and hold a vacant building, the 600-unit former Cathedral Hill Hotel at 1101 Van Ness.

When protesters arrived at the site, police were waiting for them. Wearing riot gear and reinforced by barricades, the cops successfully blocked the Geary entrance to the former hotel.

The darkness, rain, and uncertainty created a chaotic environment as protesters decided how to proceed. Some attempted to remove barricades; others chanted anti-police slogans.

Soon, cries of “Medic! We need a medic!” pierced the air. A dozen or so protesters had been pepper sprayed.

Police Information Officer Carlos Manfredi later claimed that the pepper spray was in response to “rocks, bottles and bricks” thrown by protesters. He also claimed that one officer was struck in the chest by a brick, and another “may have broken his hand.”

But I witnessed the entire incident, and I can say that no rocks, bottles or bricks were thrown at police.

When protesters opted to march down Van Ness, apparently towards City hall, several broke windows at a Bentley dealership at 999 Van Ness.

The march then turned around and headed back up Franklin, ending at the former hotel’s back entrance. There, it became clear that some protesters had successfully entered the building; they unfurled a banner from the roof reading “liberate the commons.”

Soon, many other protesters streamed into the building. They held it, with no police interference, for several hours.

Around 9:30, police entered the building and arrested three protesters for trespassing. About 15 others remained in the building, but left voluntarily by midnight.

This building has been a target of protest campaigns in San Francisco since it was purchased by California Pacific Medical Center, which closed the hotel in 2009. There are plans underway for a hospital to open at the site in 2015.

The project has been met with opposition from unions such as SEIU United Healthcare Workers West and UNITE HERE Local 2. The California Nurses Association (CNA) has also come out against the hospital proposal. In fact, it was the target of a CNA protest earlier in the day Jan. 20, when protesters created a “human billboard” reading “CPMC for the 1 percent.”

At a Jan.18 press conference, CNA member Pilar Schiavo said that at the former Cathedral Hill Hotel site, “A huge hospital is being planned with is being likened by Sutter to a five-star hotel. At the same time, Sutter is gutting St. Lukes Hospital, which is essential to providing healthcare for residents in the Mission, the Excelsior and Bayview- Hunter’s Point.”

Homes Not Jails, a group that finds housing for the homeless, often without regard to property rights, was crucial to planning the “Liberate the Commons’ protest. The group insists that the 30,000 vacant housing units in San Francisco should be used to shelter the city’s homeless, which they estimate at 10,000.

Wet and cold conditions were not what Occupy SF Housing Coalition organizers had in mind they spent weeks planning Occupy Wall Street West, which was billed as the reemergence of the Occupy Movement in San Francisco for 2012.

Yet for many, the day was still a success.

“The rain’s a downer. But I think it speaks to the power of the movement, the fact that all these people are still out getting soaked,” said Heller on Jan. 20.

Perhaps hundreds of “fair-whether activists” did forgo the day’s events to stay out of the cold. If that’s the case, then occupy protesters with big plans for the spring should be pleased.

At this rate, it seems that Occupy will survive the winter- and emerge with renewed energy in 2012.

This article has been to corrected. We originally reported that a demonstration at the offices of Citi Apartments was led by the Chinese Progressive Association (CPA). In fact, it was led by the Filipino Community Center and the National Alliance for Filipino Concerns, and supported by a number of organizations including the Progressive Workers Alliance, of which CPA is a member organization. We regret the error.