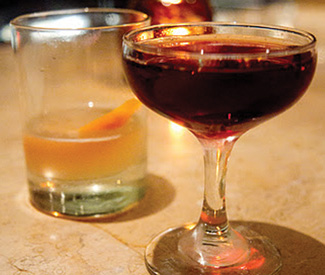 APPETITE Here are two new barrel aged beauties worth seeking out, plus more to look forward to in 2012.

I’ve enthused about small production 1512 Spirits (www.1512spirits.com) rye before, crafted by Salvatore “Sal” Cimino with a unique custom still up in Santa Rosa. During the day you’ll find him giving shaves and cutting hair in his classic Nob Hill barbershop, at 1512 Pine Street (www.1512barbershop.com).

His brand new release is a barrel-aged 100 percent rye, just on the market in a very limited release ($59.99 per half-bottle) with the largest allocation available through K&L Wines, www.klwines.com. Ryes are (blessedly) flooding the market these days but only a handful are made from 100 percent rye and even less with the one-man attention that goes into 1512. Sal cautiously guards his process, not allowing anyone else present when distilling.

Whiskey fans may quibble about a $60 half bottle when they can get cheaper ryes (or higher-priced stand-outs like Thomas H. Handy Sazerac Rye, available at Cask, www.caskstore.com). But this rye is the opposite of high production whiskey. One tastes the hands-on care in each sip. Though 100 proof, it is bright, fresh, popping with apple, vanilla, pepper, a gentle rather than bracing spice, and a lingering complexity.

I had the privilege of tasting early batches of Cimino’s future releases, including a 105 proof poitín, or “poteen” in the States, a rare Irish spirit made in this case from potatoes. (The word poteen refers to small pot stills in which the liquor is historically made). Despite the use of potatoes, I would not liken this to potato vodka. Clear, bold and light, it evokes cucumber and summer, with the spirit of an eau de vie and robustness of a white whiskey. There’s nothing in the US quite like it. (Release is set for April.)

Also later in 2012, Cimino is releasing a bracing white wheat whiskey — with more than 70 percent wheat. (I sampled it at 120 proof, but it will be bottled closer to, or below, 100 proof.) For that proof, it’s awfully smooth, evoking surprising flavors from straight-up wheat bread to clean chocolate notes. Another unusual sip, it confirms that this Nob Hill barber is creating some of California’s — and yes, the country’s — more interesting, very small batch, historical spirits. Aged Rye $59.99

The classic Dutch spirit, Bols Genever (www.bolsgenever.nl), has been produced by the Lucas Bols company since 1575. Not many distilleries can boast such a heritage. Master distiller Piet Van Leijenhorst has crafted the spirit for more than 25 years. Genever is often referred to as the original gin that London dry and other gins descended from. It’s worlds apart from what we commonly call gin, more akin to whiskey in boldness but with its own unique, herbaceous profile.

In trying the new Bols Barrel-Aged Genever, which Esquire magazine just named best new liquor of 2011, I notice the complexity rises a few more notches. Made with traditional botanicals (like cloves, anise, hops, ginger, juniper, etc…), the genever is aged 18 months in French Limousin oak. Bottled in a grey, earthenware bottle, it is as striking visually as it is in flavor. It drinks bold with a silky texture — subtly sweet with vanilla honey, cinnamon spice, wood and pepper linger on the finish.

As with a good whiskey, I like to sip Bols Barrel-Aged Genever neat, pre- or post- dinner, but it also gives intriguing dimensions to classic cocktail greats like a Mint Julep or Manhattan (substitute whiskey for genever). Bottles are $49.99.

Food and wine are the draws at gorgeous Fifth Floor (www.fifthfloorrestaurant.com), but bartender Brian Means, formerly of Zero Zero, has created singular cocktails worth a stop in the mellow lounge. Perhaps you’ll skip dinner entirely.

The unassuming Mr. Means creates some of the more promising recipes I’ve tasted from an up-and-coming crafter. As I judge multiple cocktail contests, his entries consistently exhibit a surprising level of sophistication, often placing high. He shakes (and stirs) with an unfussy hand, comprehending classic cocktail foundations, but varying off-path enough to keep it interesting.

Here are three of his cocktails I’d recommend, currently on the Fifth Floor menu:

Pink Elephant — Death’s Door (one of my favorite gins), with rosato vermouth, pineapple gomme syrup, orange bitters and smoked absinthe. Means doesn’t let the smoke overpower. Rather, it gives off a faint smoke aroma, hinting at brawn behind a delicate surface. Don’t judge it by its color.

Loretto Wrangler — Named after a key Kentucky bourbon town (home of Maker’s Mark, the Wrangler’s base spirit), Loretto Wrangler includes Cynar (Italian artichoke liqueur), Graham’s Six Grapes port, Dubonnet Rouge, and Bitter Truth chocolate bitters. It may sound like a lot of ingredients, but never fear. Playing like a classic, spirit-driven whiskey cocktail, it unfolds with layers of bitter, sweet, boozy, and — thanks to the choco bitters — meaty, goodness.

Spanish Maiden — El Tesoro blanco tequila and elderflower liqueur with a lemon twist makes for an obviously pleasing aperitif pre-dinner, right? Add in a dash of sherry and this bright refresher takes on depth and dimension, if ever so subtly, while still remaining stimulating and light. *