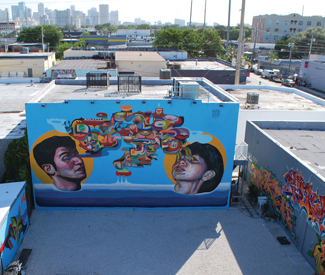 Also in this issue, Guardian writer Matt Sussman on who got the hype — and who earned it — in the galleries at Art Basel Miami 2011

VISUAL ART The popular face of Miami is made of aqua blue views and chrome rims, but the parts of Wynwood that haven’t been covered by murals yet look more like asphalt and the muted tones of low-cost rentals. Since the 1950s it’s been largely a Puerto Rican neighborhood. It’s also where many African Americans moved when they got priced out of the Overtown neighborhood to the south, where they were originally relegated by Jim Crow laws.

But, in a high-low art tornado last month, Wynwood is also where I learn that the popular legend labeling the Mission District the neighborhood with the most densely-packed street art in the world is total bunk.

Wynwood’s main drag Second Avenue is Clarion Alley on acid. Having come straight from Miami International Airport, my rental car barely inches down the strip, so omnipresent are the weaving, goggling packs of urban art voyeurs in oversized silk shirt-dresses and vertiginous wedge heels or where’d-you-get-’em sneakers. The only sign of the neighborhood’s year-round residents are the sporadic flaggers in self-bought orange vests waving cars into parking spots.

Angry sharks, Persian cat-women, color-washed streetcars, and owls sitting shotgun in convertibles — sometimes layered on top of each other — grace walls here. Designs pour off walls and onto the sidewalk. Here, the fairytale nymphs and walking houses of Os Gemeos on a fancy restaurant; there, a massive black-and-white photo wheatpaste by JR of bulging, watching eyes that echo the look of passers-by. I nearly break my neck on Mexico City artists Sego and Saner’s horned beetle-men, who clutch amulets and wear fanged leopard masks on the backs of their heads. Absolut Vodka has occupied a parking lot with a temporary open-air club, dotting it with human-sized aerosol cans and fencing it off with chainlink. It’s enough to make any street art fan lose their shit, or at least the rental car.

I’ve parachuted into the middle of Miami’s yearly art inferno, a.k.a. the week that the Art Basel art fair comes to town. Since 2002, this Swedish import has filled Miami Beach Convention Center with astronomically-priced works from over 260 international galleries. Umpteen ancillary art and design fairs populate deco hotel-land and its surrounds during this time — the city becomes one largely, loudly turned-out gallery opening.

Wynwood, with its surplus of 80-foot blank walls, hosts many an art collection — but it’s most visible contribution to the scene is its dense network of murals. Of these, the undisputed center is a compound of buildings grouped around a courtyard of marquee works dubbed Wynwood Walls. The properties were purchased by (in)famous neighborhood rejuvenator Tony Goldman in 2004. Many hold Goldman responsible for the gentrification of Soho, South Beach, and city center Philadelphia.

Wynwood Walls is his carefully orchestrated attempt to use the allure of street art to change the area’s economic fortune. Shortly before Art Basel 2011, Goldman produced a series of YouTube shorts dubbed “Here Comes the Neighborhood,” in which longtime graffiti photographer Martha Cooper cheerfully opines “Now we’ve got something [street art] that people are calling the biggest art movement in history of the world. And it just might be.”

The night of my arrival, the amount of in-progress murals at which the crawling traffic gives one an opportunity to gawk is striking. At least a dozen artists labor within a four-block radius, greeting fans, drinking beers and staring up at their half-finished creations contemplatively.

Such was the mood in which I find Buenos Aires street artist Ever, who along with an assistant is completing a massive wall featuring two disembodied heads emitting his signature riotously colorful cognitive mapping hives, which in the past he’s painted emerging from the brains of Mao Tse-Tung and his own younger brother. Ever was flown up by a community-based Atlanta street art festival, Living Walls, to paint a Second Avenue parking lot wall as part of the festival’s first project outside of Georgia.

It’s not his first international street art festival, but Ever is among the artists under-impressed with the Basel-time scene in Wynwood.

“It’s like the alcohol. I hate the shit — but one drink more!” We talk when the dust of Basel has long settled; Ever, fellow street and gallery artist Apex, and I perched around Apex’s studio in a Market and Sixth Street garment factory building.

Apex, who has been to Miami during Basel week four times, and twice to paint the crystallized, color-saturated “super burner” murals he is known for, explains that for him, the problem is exploitation. Street artists typically paint walls for a pittance or for free, in a neighborhood where businesses are making boatloads of money off spectators that come to marvel.

“You have, like, Tony Goldman, he gives a certain amount of money, property owners make money, but artists, a few make money,” Apex explains. “The rest, no. Artists get caught in the excitement of it. But who is getting paid off of it?”

“If someone is making money off of it, you should know who that is,” concludes Apex.

But the two artists agree that Art Basel week is an excellent education in the workings of the high art world for aspiring professionals, and that the camaraderie that flourishes between street artists can be important, inspirational.

And of course, the parties. Basel is known for them — 2011 featured everything from the $200-a-ticket “Fuck Me I’m Famous” David Guetta show to surprise kudos for the partykids from Pharrell onstage at Yelawolf’s Saturday night gig at a castle-shaped outdoor club in Wynwood. On my first night in town, the whole Living Walls gang — organizers, artists, errant alternative journalist from San Francisco — pile into cars and hit the Design District to check out the opening of the group show of Primary Flight, a local collective that got its start commissioning murals wall-by-wall in Wynwood.

“We started noticing we weren’t the breadwinners of the galleries,” Primary Flight founder Books Bischof tells me in a phone interview. “It was like fuck you, we’re going to take to the streets. We’re all curators in a sense, so we might as well get up and be seen.” Bischof logged time connecting with local graffiti crews and Wynwood’s homeless population to make sure he had community support for bringing the art crowd into the neighborhood during Basel week. He somewhat resents Goldman’s “just buy it” approach. “When we learned about [his Wynwood building purchases] we were like, well that’s kind of fucked.” (Though officially the two camps exist amicably, Goldman told me he upon arriving in the neighborhood he found Primary Flight’s piecemeal approach to its murals “helter-skelter.”)

But along with Wynwood’s art scene, Primary Flight has grown. In addition to its mural program — through which Apex painted his 2011 Miami wall — attendees at the collective’s gallery space could take in traditional paintings and sculptures, but also Mira Kum’s “I Pig, Therefore I Am” installation featuring the artist in the nude, living with two pigs in a small enclosure for 104 hours. “We represent artists with a street art, fuck you swagger,” comments Bischof.

Things are much more established now in Wynwood, which by most counts serves as Miami’s arts district year-round. There are expensive coffeeshops and bars, fine restaurants, precious florists, and blocks of galleries selling accessible art. (During Art Basel week, one of these is given over to an artist who specializes in kawaii food art printed onto affordable decals and posters. An entire wall is covered in swirly-topped ice cream cones in a hundred color options.)

Though professional street art certainly existed prior to his engagement, this upscaling can largely be attributed to Goldman’s speculative interest. Goldman’s PR agency sends me press materials dubbing Wynwood “the next great discovery in the Goldman Properties portfolio.” His company’s general methodology is to buy up historic buildings in socioeconomically depressed neighborhoods and fill them with upscale businesses that attract more pedestrian traffic.

There is little doubt that Goldman envisions the future of Wynwood as a place where housing units rent for far more than many of its current residents can afford. His team has spent considerable time and effort working with Miami’s city council on creating live-work zoning in Wynwood (not unsimilar to the type of zoning that loaded San Francisco’s SoMa with high cost condos). After the Basel hangover has dissipated, I get a chance to talk with him.

“When I went to Wynwood and I had boxy warehouse buildings, it was a much different challenge for me,” says Goldman during our decorous phone interview. “Now I could be free. Some people would look at ugly buildings and empty parking lots and loading zones — what I saw was an international outdoor street art museum. Huge canvas opportunities.” He bought six of those buildings in the center of the neighborhood, two of which now house spendy restaurants run by his son and daughter.

Goldman is not completely without street art cred. Since 1984, he has owned a massive wall on Manhattan’s Bowery and Houston Streets that has hosted murals from Keith Haring, Barry McGee, and Shepard Fairey. “[Street art] is freer in a lot of ways than walking in a museum, which a lot of street artists consider graveyards,” he says. “Not that I agree with them, not that I disagree with them either. I think Wynwood Walls is one place that has validated the art form as an important contribution to contemporary art.”

But Wynwood Walls also serves as the main attraction to an area in which Goldman Properties has monetarily invested. “It [is] a center place that the arts district really didn’t have, a town square, a centerpiece that was defined architecturally,” reflects Goldman. “It served its purpose.”

But perhaps this use of street art as tool of gentrification is not so incongruous. After all, most if not all professional street artists are able to create murals only by selling gallery-ready pieces. Ever tells of painting a mural for Coca-Cola with studiomate Jaz, only to use his paycheck to create three more public walls. “The reality of art is you always need a rich person,” he says.

Which is, more or less, to say that even in Wynwood, professional street art is not entirely soulless. Take for example one of Ever’s favorite Wynwood pieces, done by Spanish artist Escif. The wall was so popular, in fact, it merited a cameo in a “Here Comes the Neighborhood” episode. And not for its bright colors or revolutionary design; it’s just black capital letters on a flat white background.

But it does have a pretty direct message for good-intentioned folks in Wynwood. It says: “Remember, u’re not doing it for the money.”