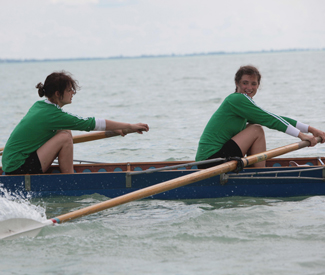 
FILM When Ingrid Eggers announced that 2012 would mark her last German Gems film festival, the news came as a bittersweet reminder that nothing lasts forever.


Perhaps not coincidentally, this theme is perfectly summed up by the quintet of films that comprise German Gems’ final line-up. From the scandal-inducing, incestuous love affair (and its slow-burning aftermath) between artistic siblings Georg and Margarethe Trackl in Christoph Stark’s Taboo: The Soul is a Stranger on Earth, to the rejection of childhood dreams portrayed in Robert Thalheim’s Westwind, this year’s festival deals overwhelmingly with the impacts and lingering reverberations of loss. Whether Eggers planned it this way — to help us work through our grief at losing her curatorial prowess — isn’t clear, but in any event, the selection does prepare the viewer emotionally to accept her graceful auf Wiedersehen.


An understated portrait of Germany’s relationship with nuclear power, Under Control is a quietly compelling observational documentary. Crafted simply from footage taken inside nuclear power plants across Germany and Austria, along with interviews with various plant operators and nuclear energy experts regarding each particular plant’s focus and future, Under Control offers an intriguing look at a side of nuclear power we’re not normally privy to: the somewhat banal day-to-day operations which go into its generation.


These glimpses include stark imagery of long, sterile white corridors; retro-futuristic control rooms filled with panels and flashing monitors; plant employees being scanned for radiation; steam curling above bucolic countryside from the giant mouths of cooling towers; a subterranean bunker where contaminated washrags go to be buried; and a tense emergency-preparedness training session during which a reactor shutdown is simulated.


By the film’s end an unexpected realization becomes apparent: the almost foregone conclusion that Germany’s nuclear age is drawing to an end. As filmmakers Volker Sattel and Stefan Stefanescu are given a tour of the remains of what was once the Kalkar nuclear facility, completed in 1985 but never taken "online," their guide mourns the loss of jobs, and more importantly, of the billions of Deutschmarks used to fund the construction of a doomed power plant.


"Chernobyl broke our backs," he asserts almost wistfully, while astonishing footage of a modern-day carnival ride built inside the shell of the old cooling tower spirals onscreen.


A film dealing more directly with loss of the utterly human variety, Jan Schomburg’s Above Us Only Sky follows Martha (Sandra Hüller), a soft-spoken schoolteacher married to PhD student Paul (Felix Schmidt-Knopp), with whom she plans to move to Marseilles after he accepts a job offer at a hospital there. Or so she thinks. In a series of brief, clipped scenes, she discovers that the man she has been living with for years has been leading a secret life she’s known nothing about.


Struggling to regain her bearings, she meets Alexander (Georg Friedrich), a charismatic, tattooed professor at Paul’s former university, and in a series of awkwardly-engineered moments, initiates a relationship with him. As their attachment grows, their pairing begins to resemble Martha’s previous relationship — right down to a discussion about moving to Marseilles. The main attraction of this film is Hüller’s nuanced performance, and her disarming veneer of almost girlish delicacy and neurotic sexuality concealing an iron will. Her previous tragedy informing her actions, she keeps her motivations to herself, revealing as little as possible for as long as possible, a stubborn survivalist strategy which finally unravels just enough for Alexander to be able to reveal his own hidden past.


A first feature for Schomburg, the deceptively simple Above Us Only Sky doesn’t waste a frame while tracing the subtle contours of a paradise lost, and one regained.