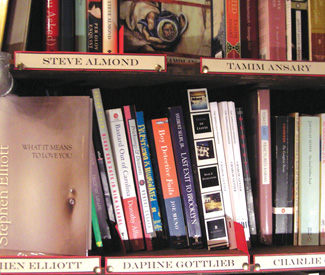 LIT On a Wednesday night in a Mission basement, a group of new friends has gathered to celebrate a library. Onstage, a man and a woman struggle to maintain their solemnity while reading a passage from David Foster Wallace’s Infinite Jest on the fallacy of video phone calls. In the dimness, the rest of the members of Ourshelves sit in chairs and on benches, everyone doubtless reflecting on the power of the written word.

Kristina Kearns has reinvigorated the concept of the lending library in the back room of Viracocha — a Mission antique store that since its opening has been a comfortable hangout for the young artist-types who sell their chapbooks and jewelry lines there. Given the enthusiastic turn out for the Ourshelves open mic reading appreciation night, her project appears to toss aside the notion that physical books are on the out in the electronic age.

This summer, with the permission of Viracocha owner Jonathan Siegel, Kearns built a beauty-loving bibliophage’s dream. Spines of tomes by hard-to-find European authors and easily-located Bay Area favorites are immaculately arranged on shelves she built herself of wood and pipe. Local artists brushed a mural of a tree made out of books on the back wall, right by the built-in bench, desk, and ever-present bottle of whiskey that lucky reader-members can steal nips from time to time.

Ourshelves’ membership has expanded to 100, though not everyone pays the full $10 a month fee for checking out an unlimited amount of books. Member requests determine the new titles that come in, but Kearns had a specific vision for her catalog when she created the space, born out of her own wants in a time of need.

The story of how she got the idea for Ourshelves is appropriately literary. Kearns had been living on the small Grecian island of Santorini living and working in a bookshop during the off-season. Political unrest forced her to suddenly and abruptly return to the States.

Where she was broke. And — egads! — couldn’t afford books. “It’s hard to find international books in the library,” she says one afternoon amongst her shelves. “And I realized I didn’t love reading, I needed reading.” Like meditation, she found, it makes her a happier person.

And she was perplexed with friends in the publishing world that called print dead. Perhaps all books needed, she thought, was a jolt in the distribution area. “What if we just try?” she remembers asking herself. “What if we don’t complain and just try? Jonathan let me try, and I think that’s awesome.”

It turned out that Kearns wasn’t the only person who yearned for a place with a well-selected inventory that could be perused for a pittance. Publishing houses and even author Michael Chabon donated to Ourshelves, and local authors now curate their own sections in the space. The results were so awesome, in fact, that now she’s hoping to re-create them across the city in family shelters and other nonprofits that need more reading material. First up is the Riley Center, a resource facility for battered women located in the Women’s Building. A January 11 ice cream social has been planned as its opening party.

Next, she and volunteers will rehab two of the Dolores Community Resource shelters’ libraries (currently “bookcases with random books,” in her words) and create a third from scratch. Kids enrolled in the 826 Valencia writing program will aide in curating a children’s section, and foreign language titles will figure prominently.

Kearns has words of advice for anyone proclaiming the death of the printed page. “One of the things we can do is flex our idea of what a bookshop is. Why do people go to bookshops in the first place?” At Ourshelves, the answer is simple: curation, creation, and good old-fashioned community.

A wholesome menu of harvest pie, savory bread pudding, and local brews draws happy hour diners, and during the day this skinny restaurant’s the perfect spot for a coffee and a tome snatched from one of the shelves that line its walls. Two actual sisters dreamed up the spot as a cross between Parisian bars, Brooklyn DIY restaurants, Viennese coffeehouses, and something totally different. A “books and booze club” meets monthly to tipsily discuss treatises like Barbary Coast: An Informal History of the San Francisco Underworld (November’s selection).

Outdoor fixin’s are wondrously un-cute — lime green paintjob over the old Wizard Smoke Shop signage — but inside the newest member of Kate Rosenberger’s bookstore family (which includes Dog Eared Books) is more than cozy. Vintage pulp novels lounge by the counter, new and used titles are arranged fetchingly throughout, and the back area’s construction zone (at the time of the Guardian’s visit) promises to be converted shortly into an area for gallery showings, readings — maybe even ping-pong between pages?

Dates for this traveling pop-up shop’s next incarnation aren’t set, but we do know it will take place at Mission Street nonprofit SF Camerawork, will feature film screenings, and if its last turn at the 667 Shotwell gallery is any indication, a lot of contemporary art books from around the world.