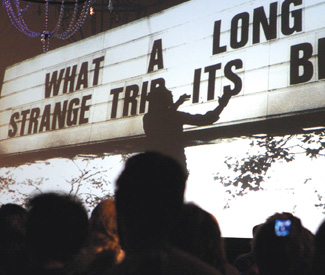 HERBWISE The Multidisciplinary Association for Psychedelic Studies (MAPS) is better known for its scientific research on hallucinogenic drugs than on marijuana. That’s because the federal government is holding, but it won’t share with the decades-old nonprofit.

Wallace — who was in the midst of preparing for “Cartographie Psychedelica,” next week’s MAPS 25th Anniversary Conference in downtown Oakland — was speaking about the NIDA’s decades of refusal to sell clinical study-grade cannabis to his organization. MAPS’ mission is to learn more about the potential of psychedelics and marijuana in treating ailments that Western medicine has proven ineffective in mitigating.

“It’s a conflict of interest that they have the monopoly on that cannabis,” said Wallace, adding that a farm located on the outskirts of the University of Mississippi is the only enterprise legally permitted by the federal government to produce buds.

The continued rebuff means that studies that could potentially prove the medicinal properties of cannabis are impossible to conduct. Not that there aren’t better buds out there. “Any medical marijuana patient has access to better weed in California’s dispensaries,” says Wallace, noting that government-approved weed isn’t available with the same diversity of cannabinoid levels.

Ironically, MAPS has had more luck obtaining MDMA for its clinical studies than marijuana, which they hope someday to test in post-traumatic stress disorder among veterans.

But the group has had its share of victories to celebrate over the last few decades. Enter the anniversary conference, five days of lectures, workshops, and parties that will assemble drug experts to speak on the past, present, and future of drug research. The event will feature a banquet to honor the progenitors of holotropic breathwork, a self-healing technique that involves quickened breathing and music engineered to take listeners to another stage of consciousness. The conference’s “most festive occasion,” according to Wallace, will be Saturday, Dec. 10’s late-night “Medicine Ball,” featuring glitchy DJs like LA’s Sugarpill and Canadian soul vocalist Ill-Esha.

Of course, it won’t be all fun and games at the Oakland City Center Marriott. The days’ programs are filled with hallucinogenic and marijuana-themed lectures and workshops. Cannabis enthusiasts will be stoked on opportunities to learn about the cutting-edge of research theories, even if the government is being prohibitive about testing the theories out. A full day’s workshop on the science and politics of medical marijuana is planned featuring doctors and activists for Friday, Dec. 9. Those unwilling to sit through that many hours of dishing on dank can check out University of California San Francisco Osher Center’s Donald Abrams, who will be giving a run-down of the past two decades of medical marijuana research in a lecture on the afternoon of Saturday, Dec. 10.

Wallace hopes that the conference will provide a learning opportunity — even to those who are not died-in-the-wool drug users.