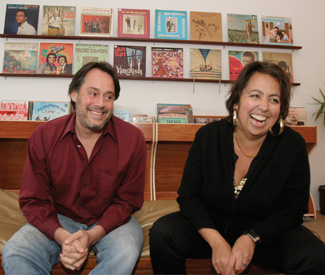 MUSIC Row after row of sentimental — sometimes kitschy, sometimes renowned — vinyl albums are lining pristine white walls in a small storefront, waiting for the opening of a record store that will exist for just one month.

Quite possibly the world’s first Jewish pop-up record shop, it’s in San Francisco on the edge of Mission and Bernal, in rotating art-music space, Queens Nails.

Like flashes of nostalgic dreams, each cardboard cover at the shop is its own piece of art: there’s the colorful impressionist style square enclosing Fred Katz’s trippy 1958 klezmer-meets-folk record Folk Songs for Far Out Folk, the shelf above holds Johnny Mathis’ breathtaking Kol Nidre, along with the campy Mickey Katz album, Mish Mosh — the cover of which depicts the artist as a (hopefully kosher) butcher posing with both meat-links and brass instruments.

There also are brand new copies of the recently released Songs for the Jewish American Jet Set, a compilation of wildly varying tracks (surf rock from the Sabras, deep soul Morrocan-born singer Jo Amar doing “Ani Ladodi”) culled from the archives of now-defunct Tikva Records, a Jewish label that was around from 1950 through 1973.

The Idelsohn Society for Musical Preservation released Songs for the Jewish American Jet Set, and is hosting the pop-up store, also dubbed Tikva Records. The group, whose mission focuses on preserving the 20th century Jewish experience through recorded sound, also has put out a number of reissues and hosted live music events in the past — this store will encompass both.

“When we initially did the reissues, we went out and found a lot of the artists on these records and we realized we really wanted to tell the stories of the music,” explains David Katznelson, the music biz veteran behind Birdman Records, president of the San Francisco Appreciation Society, and one of four Idelsohn Society co-founders.

So, in addition to selling vintage records and reissues, the store also will play host to a series of Jewish and Hebraic-themed live acts. Beginning Dec. 1 with the official opening party, artists will drop by for free, by donation performances: on Dec. 2, founding Los Lobos member Steve Berlin will original score a silent film, Los Angeles band Fool’s Gold will celebrate the release of its second LP with an in-store performance Dec. 7, classic duo the Burton Sisters will perform live for only the second time in the past five decades on Dec. 8, members of Dengue Fever will play live Dec. 10. And plenty more follow.

The Chanukah candle lighting ceremonies will begin with a performance by Zach Rogue — the leader of Oakland’s Rogue Wave who recently released Come Back To Us under the name Release the Sunbird. While some of the others acts were a natural fit in the Tikva lineup, Rogue was one that surprised me — his music has always seemed rather secular to me, so I asked him about it. Turns out, it will be his first time playing a Chanukah event. So will he play Rogue Waves songs, Release the Sunbird jams, or traditional Chanukah melodies? “I’m trying to figure that out now. I wouldn’t say that Chanukah songs are necessarily the top my repertoire.”

He explained his reasoning for participating in the event, “When I think back in terms of what got me into wanting to play the guitar, my parents raised me on psychedelic, ’60s British invasion stuff, but in terms of the actual acoustic guitar, a lot of it was Jewish summer camp — Camp Swig in Saratoga,” adding, “I was fascinated with the song leaders and the cadence of Jewish folk songs and Eastern European sound.”

Weaving around the ’50s epoch furniture (solid hand carved shelves and credenzas that look like wet bars, record players) of the newly constructed pop-up shop with “Tikva Records” in red lettering on the window front, I got a sense of a cozy, hangout for record lovers, Jewish or not, which lead me to again question: what exactly makes music Jewish?

Vibrant, and clearly enamored with these albums, Katznelson was on hand with some helpful thoughts. “I think, like all music, it’s open to interpretation. What we do is use this music to look at Jewish history — it’s beyond Jewish music, it’s music that has affected the Jewish experience.”

Jewlia Eisenberg, leader of SF group Charming Hostess, was also previewing the store — it was her first time taking a peek around too, and she seemed ecstatic, slipping records out of the shelves and commenting, “oh my god, look at this one!” Along with the help of a few volunteers, Eisenberg will be running the shop during the month of December.

Katznelson and Eisenberg pulled out records to examine, including the classic Fiddler on the Roof, but more so albums that recently came back to light, like the Latin-tinged Bagels and Bongos — another album the Idelsohn Society reissued. Says Katznelson, “Hybrids happened, and it created new sounds — so what are those new sounds called?”

An example of the modern Jewish hybrid: Jeremiah Lockwood, New York-based bandleader of the Sway Machinery and grandson of legendary cantor Jacob Konigsberg, who will light the final two nights of Chanukah candles at the store, and perform live.

During his second appearance, Ethan Miller of Howling Rain and Luther Dickinson of the North Mississippi All Stars will join Lockwood in performance. He met Dickinson back in 1998 when they worked on a friend’s album together. Says Lockwood. “It was my first trip to the South after spending my adolescence obsessed with country blues and it made a big impression on me.”

The rest of his performances will be a mixed bag, reflecting decades of the Jewish — and American — music experience. “I’m most comfortable playing blues-oriented material when I play solo, but I definitely plan to hit some tunes from the new Sway Machinery album,” he says, “I will certainly dig out some of my family’s Chanukah standards…very beautiful bits of Jewish folklore I grew up on and that were a part of the family Chanukah lighting ceremony.”

And just like that, after a month of record-selling and live performances culminating with holiday revelry, the pop-up will end, and it’ll be on to the next great idea for the Idelsohn Society. Like it was all some nostalgic, far-out folk dream.