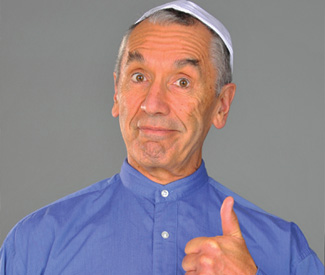 THEATER The immigrant experience has some familiar familial dynamics across the board. Parents, for instance, can easily discover their Americanized children becoming embarrassed by the older generation’s “foreign” ways. Un-hip parents are the bane of any child’s existence, but dad walking around the mall in a gallibaya doesn’t make it any easier (as hip as that may sound to you or me). Allegiances potentially strain much further, however, when the immigrant story gets entwined with a little narrative called the “war on terror.”

That’s the volatile mixture at the center of Yussef El Guindi’s Language Rooms, a somewhat uneven but ultimately worthwhile new play that leverages absurdist comedy to interrogate the perversion of basic human sympathies post-9/11. Seattle-based playwright El Guindi (whose other Bay Area productions include Back of the Throat and the hilarious Jihad Jones and the Kalashnikov Babes) well knows that the transformation of nightmare into bureaucratic routine is a reality sometimes best broached in a comic vein, since comedy has such a ready taste for the contortions of Orwellian doublethink.

Set in 2005 (when Guantanamo and CIA “black sites” were still a Bush thing, not an enduring bipartisan shame), the play, directed by Evren Odcikin for co-producers Golden Thread and Asian American Theater Company, takes inspiration from the 2003 case of James J. Yee, the Muslim Chinese American and US Army chaplain accused (but never convicted) of espionage while ministering to Guantanamo detainees.

El Guindi centers the action on a bad day in the otherwise workaday life of Ahmed (James Asher), a second-generation Arab American working as a translator and interrogator for an unnamed department in the vast multi-agency American security state. It’s not a glamorous job. The workplace is comprised of bland rooms (courtesy of scenic designer Mikiko Uesugi): white panel walls and mismatched furniture dingy under fluorescent tubes, a metal filing cabinet in the corner, some hulking box cloaked by a sheet, and a metal rolling tray piled with the ordinarily harmless contents of your average utility drawer. The only relief to the eye comes from a plastic container of honey shaped like a bear, which sits merrily beside the other clutter atop a small wooden desk.

In a rude awakening from his somnambulant occupation, Ahmed has learned from colleague Nasser (William Dao) — the only other Muslim working in their unit — that he’s under suspicion for his failure to adequately meld with his American fellows. This suspicion apparently rests on Ahmed’s noted reluctance toward public showering as well as his failure to show up at a recent Super Bowl party. Ahmed, playing ingenuously to the cameras he knows are fixed in every corner of every room, is taken aback and increasingly worried. When he’s called into a meeting with his boss, Kevin (a winningly subtle Mujahid Abdul-Rashid), the older African American man seems to be both interrogating Ahmed and trying to relate to his nervous subordinate with a paternal regard — assuring him he’s experienced divided loyalties himself during his teeth-cutting days as a COINTELPRO provocateur among black nationalists.

Ahmed, desperate to prove himself red-white-and-blue, finally gets his chance when he’s handed a new prisoner to interrogate — a man who turns out to be his estranged father (played with agile charm by Terry Lamb). If the set-up initially feels a little neat, it’s at this stage that the play gets really interesting and the dialogue most subtle, as father and son act as mutual confessors amid the distorting input from surrogate father (and stand-in for the nation state) Kevin. As the play’s title suggests, the freighted specificity of language is at the center of it all — a theme never more poignantly conveyed than when Ahmed’s father recounts the first English words he taught Ahmed years earlier, when America was still a hopeful dream a father was instilling in his son.

Ahmed has made good on that dream, while also perverting it out of recognition. “Better to ride the lion than be eaten by it,” offers his father encouragingly. But a moment later his father is turning over in his hands the tools of Ahmed’s trade with wonder and disgust. “It is not for you to get me out of here,” his father decides. “It is for me to get you out.” *