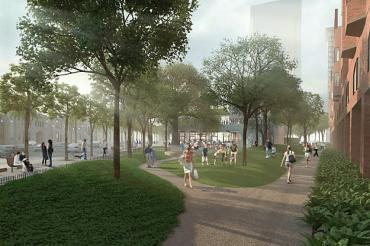 The Chron’s urban design writer, John King, thinks that the 8 Washington project would be a dandy addition to the San Francisco waterfront:

The project’s allure is what happens on the ground. Jackson Street would extend east as a 47-foot-wide pedestrian path; Pacific would conclude at the new triangular park. A narrow greenway north from Drumm would be widened to 37 feet.

The open spaces are the work of Peter Walker, who also designed nearby Sidney Walton Park, the green heart of otherwise drab Golden Gateway. What’s envisioned at 8 Washington extends the artful simplicity of that popular space. But it takes cues from the transitional location, offering pathways and nooks rather than trying to upstage the waterside drama.

So the landscape is going to look nice.

But there’s a lot more to a project than the way it looks. I’m not going to go all Form Follows Function here, but before you evaluate how much green space the development will have and what pedestrians will encounter, you have to ask another question: Why are we building this thing in the first place?

And to that, there is no good answer.