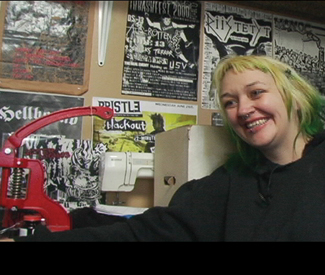 MUSIC When Blatz, a political punk band connected to all-ages Berkeley music venue 924 Gilman Street Project (the Gilman), was looking for a girl singer to join the act in 1990, it wound up with two new additions.

Annie Lalania and Anna Joy Springer were separately asked to audition, but the band didn’t realize they were already friends. When the women arrived, they decided they didn’t want to leave, and so they both joined the band, which made for chaotic, memorable live shows with massive pits in crowd and sometimes double of every instrument on stage. It was like “a silly American version of Crass,” says Springer.

Now a published author and professor of creative writing at U.C. San Diego, Springer recounts this story and other anecdotes, laced with humor and debauchery, about maneuvering through the ’90s Bay Area punk scene as a feminist queer woman in the new documentary, From the Back of the Room.

Directed by D.C.-based filmmaker Amy Oden, the documentary — which screens at the Center for Sex and Culture this week — follows the trail of women in punk, hardcore, riot grrrl, and other DIY music scenes beginning in the 1980s. Its clusters of interviews span generations, scenes, and states, with vintage and contemporary footage of live shows sprinkled throughout.

Via phone, on an eight-hour road trip during a Southern tour with the film, Oden tells me she hopes the documentary will start a dialogue on the issues faced by women, adding “My other big hope is that if younger women see it, they feel they can be a part of this community, or whatever community they want to be a part of.”

Following initial introductions and clips, From the Back of the Room is segmented into sections discussing different aspects of sexual politics — categories such as violence in the scene, and later, motherhood, arise and are addressed by female musicians, roadies, bookers, graphic designers, and house show providers.

“I started coming up with people whose bands I’d always admired, or listened to a lot,” explains Oden, also a musician. “It was bands I’d listened to growing up. [The film] was half that, and half people being like, ‘oh you should talk to this person’ or ‘have you met this person?’

Riot grrrl is likely the most consistently recognized form of female punkdom, thanks to the media frenzy in the early ’90s surrounding Wolfe’s band and acts like Bikini Kill and Sleater-Kinney.

“It was overwhelming,” Wolfe says of the hype during a phone call from her home in Los Angeles. “At first you’re flattered…but what it ends up feeling like is that your community is being taken from you and served up in a really watered-down way. The message was heavily edited — declawed and defanged.”

Wolfe, who now plays in the band Cool Moms, says riot grrrl was very much a part of third-wave feminism, adding, “I don’t feel riot grrl is super current, I think it does exist in a certain time and place, but it’s part of a [feminist] continuum.”

And therein lies another issue Oden addresses in her documentary — while riot grrrl is no longer contemporary, or at least, no longer hounded by media, there are still plenty of females in the punk scene that deserve recognition — and many more that came before it.

“I definitely think riot grrrl did some amazing things,” says Oden, “But I think that often times the other side of that story gets left out, the women that were active contributors to the punk scene before riot grrrl, during riot grrrl, and since riot grrrl.”

Clearly, women in punk did not die off in the ’90s. This week, there’s a show in San Francisco at Public Works with T.I.T.S, Grass Widow, and experimental punk act Erase Errata — the continuing torch bearers of the DIY punk movement, the Bay Area band formed in 1999 that toured with electro post-Bikini Kill act, Le Tigre.

From the Back of the Room explores longevity, but also contradictions — punk is not a cohesive scene, and it’s not void of the usual trappings of mainstream society. It’s a many-layered, impassioned, conflicting, world. Lyrics screamed about equality do not always match actions.

Springer of Blatz and later, Gr’ups, knows well the disconnect. Just last year, on a reunion tour with Gr’ups, she played with anachro-punks Subhumans and the old power struggle with the audience was alive and well. She tells me, “We were on a stage and there were all these people shouting the words to old Subhumans songs, all these amazing lyrics about freedom and equanimity.” Then, some “no shirt-wearing pseudo skinhead looking guy” in the crowd yelled “shut up and show us your tits.”

Says Thorpe from Submission Hold in the trailer for From the Back of the Room,”A lot of people come into the punk scene thinking it’s an ideal world where they’re not going to come across sexism, racism, homophobia — all the isms — but that’s not true, it exists there as well, and it needs to be addressed there as well.”

“FROM THE BACK OF THE ROOM”