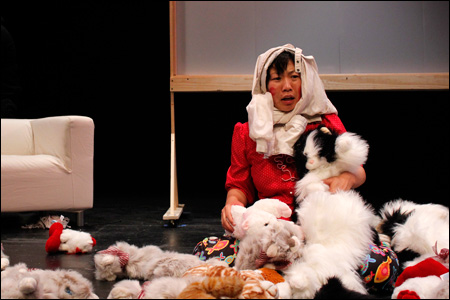 “Women my age are disappearing. My Facebook friends are no longer my friends, their toddlers are my friends.”

This sulk comes courtesy of a Kristina Wong character: a single, child-free woman in her late 20s, the titular Cat Lady in Wong’s show (performed last weekend at ODC Theater). With a glint in her eye, Wong tells the story of adopting Oliver the cat from a cat lady, who emerged from her cat lady-ness by getting married and having children. Wong, in a red blouse dress, kneepads, and white sneakers, maintains that as a solo theater artist her plays are her children, and she is doing important work ending suicide, depression, and racism with theater, the subject matter of these shows.

With a direct and devious style, Wong immediately has the audience in stitches during an opening monologue, in which she rocks a baby doll and fantasizes about the string connecting her to her soul mate that gets shorter and shorter until they are so close. She’s not the only lonely one. Feline costar Oliver, played by the grand Miss Barbie-Q in a black crushed velvet jumpsuit, also aches for affection, having been abandoned by his previous owner. Sequences of Wong chasing a laser pointer light, along with theater improvisation games and dance interludes, keep the talk of loneliness light and surreal, with a fugue here and a quartet of dancing elastic waistband pants there.

While on tour Wong meets a couple of Pick Up Artists (PUAs), played by Jabez Zuniga and Clayton Farris, loyal to Johnny Wolf’s PUA community. (For those not previously familiar with PUA Johnny Wolf, Cat Lady is a brazen introduction to his terminology where women are “targets”, and to other cringe-worthy manipulative behavior straight out of Neil Strauss’s The Game.) Wong unexpectedly reveals that she knows the PUA strategies, learned from watching Johnny Wolf videos to pass her time on tour. When she chimes in with the two PUAs hitting on her, Barbie-Q directs a committed and hilarious boot camp practice of pick up line delivery.

The funny indeed becomes strange. After the audience samples footage from an actual Johnny Wolf PUA workshop, Wong applies Wolf’s PUA tips for manipulating a female target to manipulating an audience in the theater. The parallel delivery gives the audience a taste of the psychological creepiness, which Wolf peddles.

While everyone in the play works hard to rationalize life choices and combat loneliness, no one gets an easy pass, including Wong’s friends who defend that their children are their creative project. Cat Lady unapologetically pokes. Even Johnny Wolf, with all of his women, confesses his own feelings of emptiness. In a closing scene, Wong reads his shocking letter of retirement as a PUA.