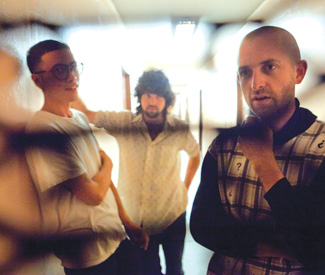 The band was picked for the first San Francisco installment of Celluloid Salon, a multimedia series that also takes place in cities such as New York, Chicago, and Austin, Texas. At the event — Nov. 15 at Public Works — the trio will live score four silent shorts from the 1920s and ’30s. “We’re good at soundscapes,” explains the group’s singer Amitai Heller, sitting amongst pedals, synths, stacked TVs, and laptops in the band’s Tenderloin practice space. “It’s kind of what we do best, is create moods.”

He’s right. The textured tracks on Harbored Mantras creep from black velvet-swaddled eerie (“What Wiwant”) to veiled ethereal (“Waldenpond.com”). Moody synths and drum machine beats are layered with cinematic samples that recall snake rattles, dragging chains, even bird chirps. The album — which is the band’s first full-length release after putting out a CD-R, a cassette, and a few records on labels such as Disaro — also takes hints from post-punk and experimental industrial, most notably, Coil.

Heller’s doomed, swallowed vocals are the most startling. “There’s definitely a lot of studio tricks with the vocals,” says Heller’s partner-in-sound, Loric Sih. “Our music is generally dense and cavernous, the vocals have to be mixed in a specific way to sound right sitting on top of that. There was a lot of experimenting, a lot of trial and error, a lot of long nights in here.” Here meaning the practice space, where a nearby metal act’s muffled guitar bleeds through the walls.

While this project arose in 2009, the two met 10 years back at UC Santa Cruz when Heller was the “flamboyantly dressed” singer of Gross Gang. After Gross Gang ended, Heller started New Thrill Parade and asked Sih to join. With Water Borders, Heller says they had a plan: “everything in reverse from how we did things in the previous band.” In the other band, they “self-promoted aggressively, toured insane, and lost tons of money.”

Says Heller, “With this, [Loric and I] decided that we wanted to get everything in order first, have concise direction…and not show people the evolution as it unfolded. So it’s record it, perfect it, show it.” While that was the theory, the reality was a bit more complicated. They had to work at bringing the synth-and-machine music to the stage in an engrossing way. “It’s taken us about this long to understand how to make electronic sound good live. I think the [record release] show we just played at Amnesia was probably the first time that nothing went wrong.”

Part of that newfound live strength comes from the band’s newest member, Matt Rogers, a longtime friend and recent Seattle transplant. At shows, the multi-instrumentalist plays guitar, keyboard, and an electrical kalimba, among other pieces. The addition of Rogers, who joined in August, meant Heller could focus mainly on vocals. And those are important to him. While they’re murky, under a thick goth-y haze, the lyrics on Harbored Mantras touch on themes of dissatisfaction, systemic and institutional change, and colonialism. They come from Heller’s sociopolitical awareness; raised on a kibbutz in Israel, he’s now a volunteer counselor at the Tenants Union and frequents the Occupy SF grounds.

While likely not so in line with his personal politics, he once composed music for a documentary on the Seastedding Institute (which, he says, is basically an organization of rich libertarians who want to colonize the ocean by creating autonomous cities). The event at Public Works will be the first scoring for Water Borders as a band though. Sih and Heller seem stoked at the prospect. “I would be happy if this band was able to score films professionally,” enthuses Sih. The tones of the short films vary wildly, one even has a slapstick element — which seems worlds away from the Water Borders vibe. Says Heller, “It’s challenging in a good way.”