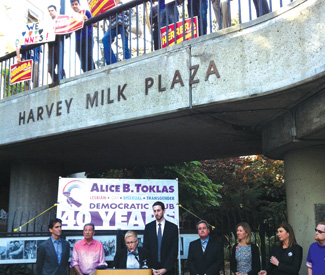 Hit pieces are common in San Francisco politics. So, sadly, are negative mailers funded by outside independent expenditure committees that can raise unlimited money.

But it’s highly unusual for an organization devoted to electing queer candidates to fund an attack on a candidate who is endorsed by both leading LGBT organizations and is, by all accounts, an ally of the community.

That’s what happened last week when the Washington-based Victory Fund — the leading national organization for LGBT political candidates — sent out a bizarre mailer blasting City Attorney Dennis Herrera for taking money from law firms that do business with the city.

The Victory Fund has endorsed former Sup. Bevan Dufty, who is the most prominent LGBT candidate in the mayor’s race. That’s to be expected; it’s what the Victory Fund does.

But why, in a race with 16 candidates, would the fund go after Herrera, who has spent much of the past seven years fighting in court for marriage equality? Why try to knock down a candidate who has the support of both the Harvey Milk Club and the Alice B. Toklas Club?

It’s baffled — and infuriated — longtime queer activist Cleve Jones, who is a Herrera supporter. “I have long respected the Victory Fund,” Jones told us. “But I’ve never seen them do what they did here. And it’s going to undermine the fund’s credibility.”

Jones dashed off an angry letter to the fund’s president, Chuck Wolfe, saying he was “appalled that this scurrilous attack, in the waning days of a mayoral campaign, would go out to the San Francisco electorate under the name of the Victory Fund.

“You really screwed up, Chuck, and I am not alone in my anger.”

We couldn’t get Wolfe on the phone, but the fund’s vice president for communications, Denis Dison, told us that the mailer “is all about fighting for our endorsed candidates.”

So how does it help Dufty, in a ranked-choice election, to attack Herrera? (In fact, given the dynamics of this election, the person it helps most is probably Mayor Ed Lee). Dison couldn’t explain. Nor would he say who at the fund decided to do the attack mailer.

But there are a couple of interesting connections that might help explain what’s going on. For starters, Joyce Newstat, a political consultant who is working for the Dufty campaign, is active in the Victory Fund, sits on the board of the fund’s Leadership Institute, and, according to a March 24 article in the Bay Area Reporter, was among those active in helping Dufty win the Victory Fund endorsement.

But again: Supporting Dufty is one thing. Attacking Herrera is another. Who would want to do that?

Well, if there’s one single constituency in the city that would like to sink Herrera, it’s Pacific Gas and Electric Co. And guess what? PG&E Governmental Affairs Manager Brandon Hernandez chairs the Victory Fund’s Leadership Institute. PG&E’s corporate logo appears on the front page of the fund’s website, and the company gave the Victory Fund more than $50,000 in 2010, according to the fund’s annual report.

Dison insisted that neither Hernadez nor anyone else from PG&E was involved in making the decision to hit Herrera and said the money went to the Leadership Institute, which trains LGBT candidates, not directly to the campaign fund.

Maybe so –- but the folks at the private utility, who are among the top three corporate donors to the Victory Fund, have to be happy. (Tim Redmond)

Herrera was also the target of another attack on his LGBT credentials last week, this one by the San Francisco Chronicle, which ran a front page story on Oct. 26 in which anonymous sources said he raised doubts in private City Hall meetings about San Francisco’s decision to issue same-sex marriage licenses in 2004. It was entitled, “Fight turns ugly to win gay votes in mayor’s race.”

Despite trying to couch the hit in passive language, writing that ” a surprise issue has emerged” based on accusations “leveled by several members of former Mayor Gavin Newsom’s administration,” it was clear that it was the Chron that made it an issue, for which the newspaper was denounced by leaders of the LGBT community from across the political spectrum at a rally the next day.

“Those who are saying this now anonymously are as cowardly as Dennis and Gavin were courageous back then,” said Deputy City Attorney Theresa Stewart, the lead attorney who defended San Francisco’s decision in 2004 to unilaterally issue marriage licenses to same-sax couples, in defiance of state and federal law, which eventually led to the legalizing of such unions. “We can’t have our community turn on us for petty political gain.”

“WTF, Chronicle?” was how Assemblymember Tom Ammiano began his speech, going on to lay blame for the attack on surrogates for Mayor Ed Lee. Ammiano also called out the mayor for campaign finance violations by his supporters, for undermining the Healthy San Francisco program that was created by Ammiano’s legislation, and for repeatedly ordering police raids on the OccupySF encampment.

“How about some fucking leadership?!” Ammiano said.

Cleve Jones, an early gay rights leader who marched with Harvey Milk, also denounced Lee and his supporters for cronyism, vote tampering, money laundering, and the “fake grassroots” efforts of the various well-funded independent expenditure campaigns, which he said have fooled the Chronicle.

“To the Chronicle and that reporter — really? — this is what you do two weeks before the election? You should be ashamed of yourself,” Jones said. “How stupid do you think we are?”

Yet Chronicle City Editor Audrey Cooper defended the article. “Clearly, I disagree [with the criticisms],” she told the Guardian. “I personally vetted every one of the sources and I’m confident everything we printed is true.” She also tried to cast the article as something other than a political attack, saying it was about an issue of interest to the LGBT community, but no LGBT leaders have stepped up to defend the paper.

Beyond criticizing the obvious political motivations behind the attack, speakers at the rally called the article bad journalism and said it was simply untrue to suggest that Herrera didn’t strongly support the effort to legalize same-sex marriage from the beginning.

“I can tell you that Dennis never once shrank from this fight. I was there, I know,” Stewart said, calling Herrera “a straight ally who’s devoted his heart and soul to this community.”

Sen. Mark Leno, who introduced the first bill legalizing same-sex marriage to clear the Legislature, emphasized that he isn’t endorsing any candidates for mayor and that he didn’t want to comment on the details of the article’s allegations. But he noted that even within the LGBT community, there were differences of opinion over the right timing and tactics for pushing the issue, and that Herrera has been a leader of the fight for marriage equality since the beginning.

“I am here to speak in defense of the character and integrity of our city attorney, Dennis Herrera,” Leno said, later adding, “I do not appreciate when the battle for our civil rights is used as a political football in the waning days of an election.”

Molly McKay, one of the original plaintiffs in the civil lawsuit that followed San Francisco’s actions, teared up as she described the ups and downs that the case took, working closely with Herrera throughout. “But this is one of the strangest twists I can imagine,” she said of the attack by the Chronicle and its anonymous sources. “It’s ridiculous and despicable.”

Representatives for both the progressive Harvey Milk LGBT Democratic Club and fiscally conservative Alice B. Toklas LGBT Democratic Club also took to the microphone together, both saying they often disagree on issues, but they were each denouncing the attack and have both endorsed Herrera, largely because of his strong advocacy for the LGBT community.

Sup. Scott Wiener called Herrera, “One of the greatest straight allies we’ve every had as a community.”

When Herrera finally took the microphone, he thanked mayoral opponents Joanne Rees and Jeff Adachi for showing up at the event to help denounce the attack and said, “This is bigger than the mayor’s race. It’s bigger than me.”

UPDATE: THIS ITEM HAS BEEN CHANGED FROM THE PRINT VERSION TO CORRECT INACCURATE INFORMATION DEALING WITH WHETHER PAST INIATIVES CAN BE CHANGED

October yielded tremendous financial contributions from real estate investors and interest groups for Yes on E, feeding fears that the measure will be used to target rent control and development standards in San Francisco.

Sup. Scott Wiener has been the biggest proponent for Prop E since May 2011. He argues that the Board of Supervisors should be able to change or repeal voter-approved ballot measures years after they become law, saying that voters are hampered with too many issues on the ballot. Leaving the complex issues to city officials rather than the voters, makes the most sense of this “common sense measure”, Wiener calls it.

But how democratic is a board that can change laws approved by voters? Calvin Welch, a longtime progressive and housing activist, has his own theory: Wiener is targeting certain landlord and tenant issues that build on the body of laws that began in 1978, when San Francisco voters first started adopting rent control and tenants protection measures. Yet the measure will only allow the board to change initiatives approved after January 2012.

“That is what the agenda is all about — roughly 30 measures that deal with rent control and growth control,” he said. Critics say  the measure will leave progressive reforms vulnerable to a board heavily influence by big-money interests. Although Wiener denies Prop E is an attack on tenants, who make up about two-thirds of San Franciscans, the late financial support for the measure is coming from the same downtown villains that tenant and progressive groups fight just about every election cycle. High-roller donations are coming straight from the housing sector, which would love a second chance after losing at the ballot box.

Contributions to Yes on E include $15,000 from Committee on Jobs Government Reform Fund, $10,000 from Building Owners and Managers Association of SF PAC, another $10,000 from high-tech billionaire Ron Conway, and $2,500 from Shorenstein Realty Services LP. Then — on Oct. 28, after the deadline for final pre-election campaign reporting — the San Francisco Association of Realtors made a late contribution of another $18,772, given through the front group Coalition for Sensible Government.

Prop. E is organized so that the first three years, an initiative cannot be subject to review. However after four years, a two-thirds majority vote by the board could make changes, and after sevens years, a simple majority could do so.