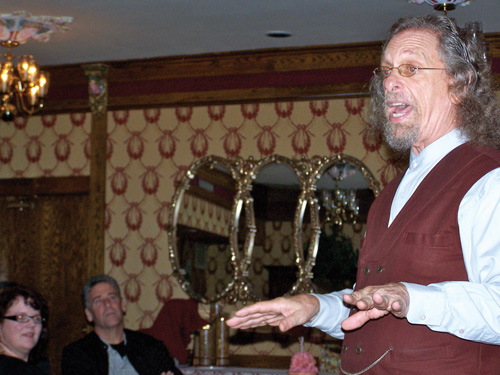 With his bedazzled fanny pack, kerosene lantern, Civil War-era boots, calf-brushing leather jacket and windswept gray mane, Jim Fassbinder looks like any weathered San Francisco character. Listen to him wax poetic on Mary Ellen Pleasant or Gertrude Atherton, though, and you’ll realize you’re talking to a man with a serious passion. To Fassbinder, these gals aren’t only appealing for their work as (respectively) an abolitionist and a feminist novelist. Their lingering spirits are the real draw.

“I’m basically a fishing guide,” Fassbinder asserts early in his three-hour ghost hunt on the streets surrounding Alta Plaza Park in Pacific Heights. “I tell you about the kinds of fish, take you to all the spots, set you up with the right gear.” The fish in this extended metaphor are ghosts, friendly for the most part, who Fassbinder believes roam through the houses and streets of this bone-chillingly cold neighborhood.

Along the year-round tour, Fassbinder uncovers, displays, and recounts evidence of the neighborhood spirits. One likes to pelt ghost hunters with eucalyptus seed pods, or as Fassbinder calls them, “gum nuts.” One will visibly and eerily turn a metal key over in your open hand. One will cross California Street, her body only visible as a cylinder of mist.

Fassbinder seems to be met with very little skepticism and a great deal of genuine interest. Cold-afflicted and with his voice a grave octave below normal, Fassbinder addressed a recent tour of nearly fifteen people in the lobby of the Queen Anne Hotel. Those enraptured by the ghost hunter’s words included several tourist families and two grinning grandmothers hopped up on painkillers (I quickly learned) for their bad backs.

“My goal is for each of you to have a real supernatural encounter,” he said, and was met with a camera flash, which may or may not have also captured a telltale ghostly orb. The chandelier flickering above the listening party garnered nervous glances and a burgeoning murmur, which Fassbinder soon quelled. “It’s just the wires,” he said, but not everyone seemed convinced. (Lucy Schiller)