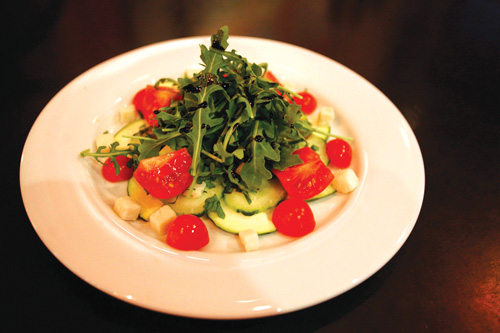 DINE On a recent midsummer’s eve, I found myself gazing down the Valencia Street corridor and (with a slight squint of the eye) though: this is just like the Strip! This is like Vegas for hipst — but no. No more H-bombs from me. The question does remain, however, whether a neighborhood can be as utterly transformed as this part of the Mission has been and still remain a neighborhood. One sunny bit of proof that the answer might be yes is the recent opening of Radish, one of those small, slightly-off-the-beaten path, homemade-with-style places that have long made this city such an appealing place to eat.

Just as some of the better restaurants in Las Vegas are off the Strip, so Radish is a few but important steps off the parade route. It occupies a classic corner spot, an L of windows (including transom windows that have been carefully cleaned — not something you see every day), at 19th Street and Lexington. It feels rather far from the madding crowd — Lexington is a lovely, leafy lane — but it is central. There are some impressive oil paintings on the walls, something else you don’t see every day.

The radish as a foodstuff has won mixed reviews down the ages. It is a crucifer and is therefore believed by some to have anti-cancer properties. But Pliny the Elder (the Roman writer and admiral who perished at Pompeii 1932 years ago last month) found the little root to be “vulgar” and a cause of “flatulence and eructation.” Oh dear. Luckily, the menu at Radish doesn’t emphasize radishes. In fact I spotted just one, a lone coin lurking in a side salad amid a swarm of halved pear tomatoes. Maybe it was a stray. Otherwise, the food is a cheerful mélange that moves winningly between all-American and new American — new-all American, if one is permitted to put it that way, with a slight Southern twist — n’all? — since the chef, Adam Hornbeck, grew up in Tennesee.

But someone in the kitchen has been to the north, all the way to Canada, judging by the poutine ($8) we found chalked onto the specials board one evening. Poutine is the dubious but wildly exciting friend your mother always wanted you to stay away from. Radish’s version was a huge plate of French fries doused with gravy (almost a béchamel sauce, it seemed to me) and topped with shreds of crisp bacon and plenty of ripe avocado slices.

“There are 10,000 calories on this plate,” came the complaint from across the table. Yes. And that was not too high a price to pay. If I were a budget-cutter, I might have dealt away the avocado, which brought some pretty color but otherwise was too subtle for such a muscle-y mess of a dish.

Mac ‘n’ cheese ($4.50) seemed to be nearly as calorie-dense as the poutine, but because it was served in a much more modest portion, in a small crock, it didn’t send the needle on our calorimeter spinning. A nice alternate home for the poutine’s avocado slices, incidentally, would have been the boldly tangy old world salad ($9), a neatly arranged English garden of sliced heirloom and cherry tomatoes, rounds of summer squash, smears of goat cheese, arugula leaves, and a full-throated balsamic vinaigrette that, like a compelling speaker, brought the constituents together and held them rapt.

Hornbeck’s baby back ribs ($14) are really first in show. We found them to be spicy, smoky, and — most important — juicy. It was as if the meat were oozing liquid smoke. It doesn’t matter how tasty your sauce or marinade is if you dry the ribs out when roasting them, and it is awfully easy to dry them out. To find them beautifully cooked and smartly seasoned, as here, was a real treat. The accompanying potato salad was, like its partner (a lone cob of grilled corn), very much a sidekick, but it had been carefully made with big, irregular chunks of new potato and plenty of paprika for color and kick.

A steak sandwich ($13) was served on focaccia, and the flaps of meat were tucked in with strips of orange bell pepper and melted cheddar cheese. The side salad of arugula and spinach turned out to be the home of the fugitive radish coin; finding it was like the culmination of an Easter egg hunt.

One of the desserts deserves a special mention, the shortbread ($6), festooned with strawberry meringue and whipped cream. The shortbread had some of the sublime crispy-spongy quality of a cinnamon bun, and I wondered if it might be some version of brioche. No, we were told, it was a biscuit, the same kind the kitchen uses for its breakfast dishes. This is frugal and prudent — also brilliant, or, as the h-folk sometimes put it, rad.