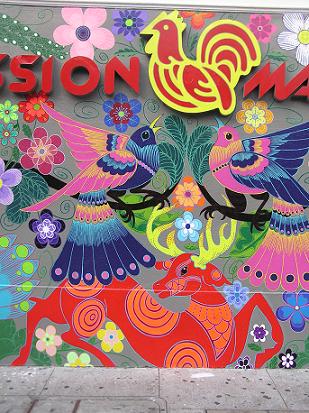 We asked Jet Martinez, the mural artist, yesterday at the mural unveiling for “Amate” at the Mission Community Market:

“Soo… it’s all about loving yourself?” [Such is the title’s meaning in Spanish.]

Not really, kind of, not really. The word — depending on where you place the accent — can refer to auto-adoration, or to the brown paper on which many Mexican folk art designs are painted. Whatever the ultimate meaning of the title, Martinez’ new piece (there’s a gorgeous full shot of it here) is easily the most vividly colored wall we’ve seen in this city in a minute — it’s like those scenes in Disney movies where all the woodland forest creatures get frenzied-happy during the climax of a musical number. Make you wonder what song they’re singing.

“Amate” is not the only large-scale street art you should peep on the street (preferably while you’re heirloom tomato shopping with a greasily-transcendent pupusa balanced precariously in one hand). You perhaps know about Ben Woods’ recreation of a 1700s Ohlone mural from Mission Dolores — which sits directly next to Martinez’ creation.

A few more from the block:

Roa‘s three seals (there’s another stretched out along the bottom of the building, sorry I suck at taking photos) are amazing.

And here’s a piece which has gotta be by Ben Eine (UPDATE: aaand it is), even though it’s not included on this White Walls map of the recent pieces the British artist painted around the city. Whoever did it, it appears to have garnered the attention of some paint-throwers.

Word on the street from the Mission Community Market is that the organization is in talks with property owners of the condo-parking lot on the southwestern side of the block to liven up that surface as well. Pretty soon, we may have a block so colorful enough to match the MCM produce stalls.