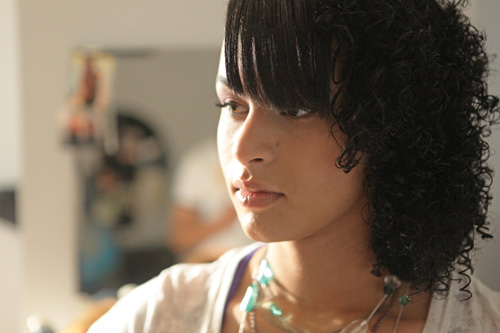 FILM Though the visibility of gays and lesbians in cinema remains (largely) confined to independent film, Rashaad Ernesto Green, in his debut feature Gun Hill Road, uses the creative freedom afforded by that closeting to explore issues of race and confused sexuality amid the Latino population of the Bronx.

Esai Morales is Enrique, a former drug dealer returning from prison to his wife Angela (Judy Reyes) and teenage son Michael (Harmony Santana). But everyone seems to have moved on with their lives. Angela is having an affair, and Michael has created a new persona, Vanessa. Green’s film focuses on the relationship between the damaged Enrique and Michael, whose cross-dressing and budding transsexuality puts the family members at odds.

Nominated for the Grand Jury Prize at Sundance and an entry in this year’s Frameline Film Festival, Gun Hill Road is one in a recent spate of films that deals with coming out in an urban setting. Like Green’s film, Peter Bratt’s La Mission (2009) offered a picture of homophobia in the Latino community. But Gun Hill Road, despite its bulging dramatic heft, shirks the after-school-special formula of La Mission by imagining complex characters rather than hewing them from instantly recognizable, sympathetic archetypes.

Yet Gun Hill Road takes many a detour into hokum-town. There’s a lot of yelling and screaming in that tiny Bronx apartment, which makes the proceedings occasionally claustrophobic and tiresome. The film has the subtlety of a slam poetry reading: it has emotional punch, but that punch often feels like its swinging in the dark. Yet the whole thing is handled with such chutzpah and bravery that you have to admire it.

The young Santana is fearless, portraying Michael-Vanessa with a naked-to-the-world earnestness that makes him the emotional center of the film. Enrique’s fist-wielding masculinity makes him a difficult character to like, but the film is well-cast and the performances are on-point. Though the script is flawed, it’s the execution that succeeds.

With a handheld camera in the tradition of gritty social realism, Green sheaths the Bronx cityscape in a muted lacquer of beige and blue, affording visual pleasures while treating Michael’s disoriented sexuality with sensitivity rather than camp. But the film probably could have used a sense of humor. Perhaps it’s because Michael isn’t yet comfortable in his own skin. In the end, Green gives us reason to believe that he’ll get there.