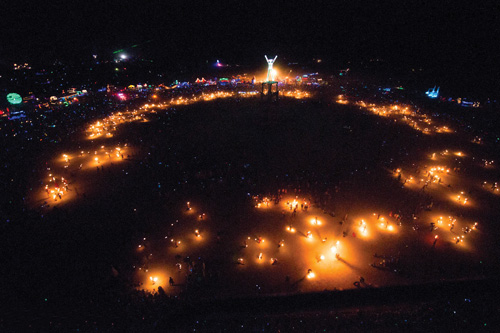 PLAYA PREP Burners everywhere were frantically preparing for the playa, or scrambling to find scarce tickets to Burning Man, which had just sold out for the first time in its 25-year history. But when the board members who stage Burning Man gathered in the 15th-floor conference room in their new Mid-Market headquarters to talk to the Guardian on July 28, they didn’t even want to talk about the event that begins Aug. 29.

Instead, they wanted to talk about the future of the dynamic culture that this unique countercultural event has spawned, a future that has as much to do with San Francisco as it does Black Rock City, the temporal Nevada desert town of about 50,000 people that most people know simply as Burning Man.

Event founder Larry Harvey, who chairs the Black Rock City LLC Board of Directors; Harley DuBois, who acts as the city manager; and Marian Goodell, who runs the business and oversees communications, have served on the board that stages Burning Man since the LLC was created in 1996, along with Crimson Rose, Will Roger, and Michael Mikel, a.k.a. Danger Ranger.

But their focus right now is on the new nonprofit, The Burning Man Project, that is being launched this week to manage the event and its culture well into the future. “We’re planning for 100 years,” Harvey said. Or as DuBois put it, “It’s really not about Black Rock City at all, but how we look out to the world.”

Since taking over five of the top floors in the David Hewes Building at the corner of Market and Sixth streets — with The Burning Man Project office placed on the very top floor, over the many burner offices now busily dealing with more immediate tasks — their outlook on the world is downright panoramic.

They envision a high-profile Burning Man Urban Center in San Francisco and other year-round facilities for furthering the burner culture, made possible by new funding streams they want to develop beyond the revenue from ticket sales, such as grants and perhaps even corporate sponsorships.

Oh yeah, and as Harvey made clear in his April speech announcing the conversion to the new nonprofit (see “Man on the move,” 4/5/11), the six board members also want to cash out with significant financial payouts as they begin to relinquish control of the event in phases over the next six years or so.

Who will run the new nonprofit, or even how the leaders will be selected and the governance structures under which they will operate, is still a work in progress. Initially, the LLC has selected 11 new board members (to be announced on Aug. 5) to serve with the current six on the new nonprofit board, but the newbies will serve a term of just one year.

Goodell said they selected “people who have a unique or visionary way of looking at things,” while DuBois said they sought a board that was “geographically and culturally diverse, and people who have skill sets we need,” such as legal, fundraising, and organizational expertise.

The initial board will create the infrastructure and plan for what comes next, and the board insists that the larger Burning Man community will also have input into the process, starting this year on the playa. The Burning Man Project will have a high-profile presence on Everylane Lane near Center Camp, and they say board members will be available for discussions everyday between 1-2:30 p.m.

“We’re going to have a conversation with the community,” Goodell said.

BRC took some heat from its community for prescribing what’s next without much public process or input, but Dubois said, “There’s still time for all of that. We are in the nascent stage…There’s so much time for community input.”

But the basic structure is there, including bylaws, a mission statement, and a set of programs that include education, civic engagement, arts and culture, urban and rural cultural centers, a philosophical center, and social acculturation. And the triggers and timeline have been set up to leave the current board members in firm control of Burning Man for at least the next several years.

“The Project has been designed in ways that aren’t altogether typical,” Harvey said. “We’ve wrapped this entire project around the 10 Principles.”

But unlike on the playa, where BRC has aggressively guarded against being commodified or co-opted by corporate interests, it has been a little more lax about that off-playa. The company’s move to Mid-Market was used by the Mayor’s Office, downtown landlords, and the daily newspapers to help sell the controversial Twitter tax break package earlier this year (despite the fact that nonprofits aren’t affected by the legislation).

“We were pleased enough to do a press conference with them,” Harvey said, but he rejected the suggestion that they allowed themselves to be used in downtown’s political power play. “We can’t control what others do. Everyone has their motives and our motive was not the city’s motive.”

In fact, all three board members bristled at the notion that Burning Man’s cultural cache might be tapped by those with other agendas. “We don’t care about that,” Dubois said. And Goodell said that after negotiating with federal officials over Burning Man permits, “If anyone thinks we’re naïve in our political moves, we’re actually pretty savvy.”

But Burning Man culture is littered with critics of the LLC who accuse the board of being insular, myopic, and controlling. Even during the recent sell-out of Burning Man tickets and the skyrocketing prices then demanded by scalpers, the board members insisted there was nothing they could do, although burners on the outside have offered lots of suggestions for how that might be controlled, such as a regulated aftermarket ticket trading area.

Even nailing them down on whether the event will continue to grow is difficult. “Our position is that we never want to grow too fast,” Harvey said, but it could continue to grow beyond 52,000 attendees. “We don’t have any figure in our heads of what that mythical ‘too big’ is,” he said, although they are now negotiating a new federal permit that would allow 70,000 attendees within five years.

But these sorts of nuts-and-bolts questions aren’t what the board seems concerned about now, and they even refused to answer Guardian questions that weren’t related to The Burning Man Project, the launching of which has been closely tied to their move downtown.

“This is not Black Rock City LLC,” DuBois said of the entity housed in the new Burning Man headquarters, perhaps jumping ahead of things just a bit. “This is the Burning Man Project here.”