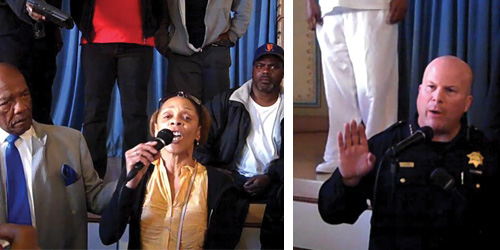 As the murky details of two recent police shootings emerge, a palpable anger surging through targeted communities points to a deeper issue than the particular circumstances surrounding each of these deaths. Simply put, many Bay Area communities are fed up with police violence.

For many activists who descended on transit stations to protest the fatal BART police shooting of Oscar Grant III, the 20-year-old unarmed Hayward man who was killed on New Year’s Day 2009, an upwelling of rage was rekindled after BART cops shot and killed a homeless man named Charles Blair Hill on July 3 in Civic Center Station.

Then, on July 16, San Francisco police officers in the Bayview shot 19-year-old Kenneth Wade Harding Jr. multiple times after he ran from the T-Third train platform because he’d been stopped for fare evasion, leaving him dead on the sidewalk.

The recent officer-involved shootings occurred under two different law enforcement bodies, and both incidents remain under police investigation with many questions still unanswered. BART police say Hill was brandishing a knife; the San Francisco Police Department (SFPD) said its response was justified because Harding fired at officers first. The investigation in Harding’s case took a bizarre twist July 21 when SFPD issued a press release based on a medical examiner’s report stating that Harding had died not from rounds fired by police, but a self-inflicted gunshot wound.

But among communities distrustful of the police, the particulars of each case seemed to matter less than the perception that officers are too quick to escalate conflicts into deadly standoffs. Both incidents provoked intense anger because they resulted in marginalized transit passengers suffering sudden, violent deaths following interactions that were initiated by police. The shootings sparked angry protests, prompting standoffs at Civic Center BART Station, along the T-Third line in the Bayview, on Valencia Street, in Dolores Park, inside the Castro Muni Station, and at the cable car turnaround on Powell Street.

A group of activists staged protests in the Mission following the Bayview police shooting, snaking through the streets as they disrupted traffic and public transit service. “The march began at Dolores Park where nearly 200 of us departed,” an anonymous post on the anticapitalist Bay of Rage website recounted, describing the events of a July 19 protest that resulted in 43 arrests. “Upon reaching the Castro Muni Station, all hell broke loose…. What had now become a mob moved effortlessly past the bewildered cops … Trash was set alight and thrown down onto the tracks below … ticket machines, the fare checkpoints, and the agent booth were all smashed with hammers and flags — totally ruined. Smoke bombs and fireworks were thrown throughout the station.”

This display occurred just eight days after protesters shut down BART stations in downtown San Francisco during rush hour to condemn the fatal shooting of Hill, the homeless BART passenger.

The message from outraged Bayview residents at a chaotic and emotionally charged community forum staged July 20 at the Bayview Opera House was not that people were upset that this had happened to Harding, a Washington state resident, in particular. Instead, people expressed outrage that police had gunned down yet another African American youth, and that unless some complicated and long-standing issues were addressed, it could happen again, to anyone. The forum was organized in partnership with the SFPD and clergy members from the Bayview. Police had prepared a PowerPoint presentation, but never managed to get that far.

At the meeting, Police Chief Greg Suhr tried to provide an explanation for the July 16 shooting. “During this foot pursuit, at some point in time, the suspect … fired at the officers, and the officers returned fire. This is the account that we have so far,” he said. “I cannot tell you how badly that I feel … as captain of this station for two years,” Suhr continued, as an angry crowd shouted him down.

Police escorted Suhr out of the meeting before everyone who had signed up to speak had a chance to be heard. Once outside, the police chief told reporters that he planned to return.

After Suhr and other city officials departed from the meeting, District 10 Supervisor Malia Cohen stayed at the Bayview Opera House and addressed the crowd that remained, she later told the Guardian, and engaged in discussion with Bayview homeowners, merchants, and other community stakeholders.

“We had a very thoughtful conversation,” she said. “People had questions about [Municipal Transportation Agency] policy over the SFPD riding the bus. We talked about the importance of attending Board of Supervisors meetings, Police Commission meetings, and giving public comment. And there will be future conversations, without obstruction.”

Many who attended the meeting voiced concerns that went well beyond the July 16 incident. Several said they believed youth were unduly harassed by law enforcement over Muni fares on a regular basis. Elvira Pollard spoke about how her son was shot 36 times by police and killed seven years ago. Another woman complained that police had used abusive language when she was arrested in the Bayview four years ago.

Mayor Ed Lee told the Guardian that a bigger police presence at the Oakdale/Palou stop on the T-Third line was part of the city’s strategy to prevent violence in that area. “I actually asked the chief to pay more attention to areas that had a history of gun violence and shootings and other kinds of violence … and it just so happens that this particular area, Third and Palou, is a place where there’s a lot of violence,” Lee said. “So we had more uniformed officers on that specifically at not only my request, but with the understanding of the police chief, too.”

Responding to acts of violence by sending in more police sounds simple enough, yet it seems a toxic environment has arisen out of a heightened police presence in a community where tensions between police and residents already run high, fueled by anxiety and bad past experiences. Add to this dynamic a trend of youth who lack other transportation alternatives riding public transit even if they don’t have enough money to pay the fare, and the situation feeds ongoing strife, particularly when fare evaders are asked for identification and searched by police.

Lee, in partnership with Cohen, called a meeting in City Hall July 19 with leaders of the Bayview community. The press was not allowed to attend, but participants said later that officials gave a presentation about the shooting and played an audio of gunfire from the SFPD’s SpotShotter program to offer evidence that Harding had fired first. Later that day, the SFPD reported that gunshot residue had been detected on Harding’s hand, supporting the police account of what happened. Yet the July 21 press release, suggesting that Harding had shot himself because a .380-caliber bullet that police said could not have come from SFPD firearms had entered the right side of Harding’s neck, made it even less clear what really happened.

By July 22, confusion was still swirling over why a gun hadn’t immediately been recovered from the scene of the shooting, and there still wasn’t any clarity on whether an online video of a passerby removing a silvery object from the sidewalk showed a person who retrieved Harding’s firearm after the shooting, as police have claimed. Police recovered a gun that was initially believed to be Harding’s, but later reported that the gun could not have been the same weapon that discharged a .380 caliber round into the victim’s head.

Chris Jackson, a Bayview resident who sits on the board of City College of San Francisco and ran for District 10 supervisor in 2010, said after the City Hall meeting that he felt it had amounted to little more than a lecture from the city’s top officials. Jackson said he perceived a need for a policy shift in terms of how to deal with fare evasion and violence prevention. “We need a better approach,” he said. “We cannot address this with more cops on the T line.”

After Harding’s death, it came to light that the 19-year-old Washington state man had served time for attempting to promote prostitution, and had been named as a person of interest in connection with the fatal shooting of a 19-year-old Seattle woman. Yet a widely circulated online video showing him writhing on the sidewalk in a pool of blood after being shot, while a handful of officers continued to stand around with weapons drawn, sparked outrage. Once the forum at the Bayview Opera House had broken up, LaDonna Callaway condemned the police response, saying, “They didn’t have to shoot him as many times as they did.”

Angelique Mayhem, a Bayview resident who stood nearby, told the Guardian that she didn’t think the meeting had solved anything. “A boy gets gunned down. We don’t know if there was a gun there, but we do know that for 40 damn years, people have been getting gunned down in this community,” Mayhem said. “People are angrier now than when they were when they walked in the door. We’re a community that’s truly in pain, that’s truly frustrated, and really needs some respect.”