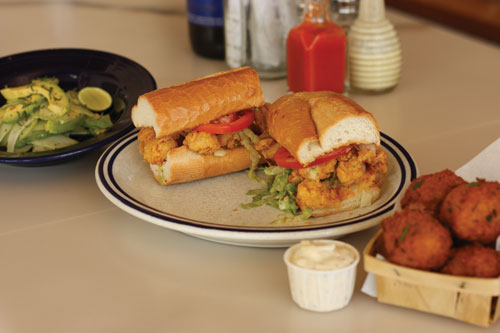 DINE The soft bigotry of low expectations — one of those marvelous phrases dreamed up by George W. Bush’s hardworking speechwriters, who fed him their words the way you would put junk mail through a shredder — was on my mind recently when I walked into Criolla Kitchen, which earlier this spring replaced Bagdad Cafe at the corner of Market and Sanchez streets. My expectations were low. Why? Because Bagdad Cafe was the last titan of mediocre 24-hour gay diners in the Castro. Oh, it had its charms, and it had been there forever, but people weren’t piling in for the food.

Still, when the old soldier mustered out at the end of March, I felt a pang, because it was one of the last memories of what the Castro once had been — for that matter of what this city had once been. And when I learned that it was to be replaced by a restaurant serving Creole food, I thought: eh. Bagdad Cafe, for all its winsome qualities, did leave the premises with the bar set on the low side food-wise, and Louisiana cooking has never been particularly well-represented here.

But: the man behind Criolla Kitchen is Randy Lewis, late of Mecca, Le Club, and other distinguished kitchens, so more optimism might have been warranted. Lewis’ food is brightly seasoned, full of life, and reasonably priced, while the setting — a triangle of light, a slice of glass pie with a flower stall on the sidewalk outside for color — recalls an early edition of Zuni Cafe.

It’s always seemed right to me, in a wistful sort of way, that we don’t have particularly distinguished Louisiana food here. This isn’t Louisiana, after all; if you want good Louisiana cooking, you should go there. The Cajun and Creole culinary traditions of the Mississippi delta are an authentic cuisine, a blend of French, Spanish, Caribbean, and African influences quite different from those that make up our own, also authentic — and distinctive — style.

The delta style is a little brighter and more pointed than ours — more Matisse than Monet — and because I am personally fond of extroverted food rendered in primary colors, I found myself bewitched by Criolla Kitchen. There is a lot of fried stuff on the menu, and why Southerners like to fry things so much remains a mystery to me. But they do it well, and it does taste good. I’ve heard people fret endlessly about eating too much of it, but I’ve never heard them say they don’t like it.

Besides, if you want hush puppies ($5.90), like little fried corn dogs except with shrimp inside, you can balance your account with the likes of the mirliton salad ($5.90). Mirliton is a cross between a cucumber and a pepper, and has a cool crunch and refreshing quality you might associate with sorbet. The salad was enriched with slices of ripe, creamy avocado, then lighted up with a well-balanced vinaigrette of lemon and cumin. As for the hush puppies, you dip them in a pickle rémoulade, a modified mayonnaise that’s a lot like what the French call sauce gribiche. It’s rich, but with enough acidity to make at least a slight dent in the hush puppy fattiness.

The ribs ($18.90), we were told, were slow-barbecued at an undisclosed location in the East Bay. I found them flavorful but slightly dry. The barbecue sauce on the side, on the other hand, had a pepperiness far more assertive than is typical of the commercially available stuff, which tends to be sweet and thick even if with some kick. This sauce was taut and lean, with low body fat. We also admired the accompanying sides of coleslaw (tangy, not sweet, and with long threads of green cabbage) and potato salad, made from smashed new potatoes and sober, direct mayonnaise. The importance of good mayonnaise in this kind of cooking can’t be overstated; it also made the difference (along with a tangy-fresh baguette) in the shrimp po’boy ($10.90).

All the juiciness absent from the ribs turned up in the fried chicken ($12.90), a full half-bird served with red beans and rice. Even the breast meat was juicy, while the skin and the artfully seasoned batter had fused into a shell that was an experience unto itself — almost like shards of savory candy.

Dessert could only be pecan pie ($3.90), which was not at all cloying and for that matter didn’t even really resemble a slice of pie — more a kind of crumble, with chunks and bits of pastry everywhere. We didn’t mind, but … is there such a thing as a pie shredder?