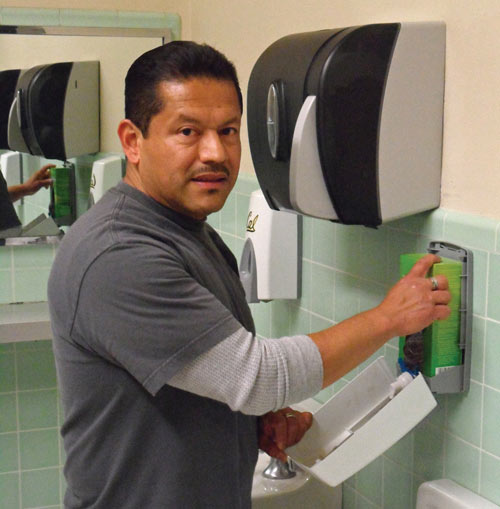 By 7 a.m., when engineering students begin to trickle into Cory Hall at UC Berkeley, Arnold Meza has already scrubbed the floors, wiped clean the chalkboards, and emptied the trash of 30 offices and many of the classrooms and hallways of the six-floor building.

His early shift as a custodian is a gift, he says, because it is steady compared to his former swing-shift schedule, but Meza is still barely making rent. And he is a single father of four. Like many service workers in the University of California system, Meza wonders how the university can refuse to give him a 3 percent wage increase while top UC executives receive six-figure bonuses every year.

“It falls on broken promises,” Meza said while tying up a bag of trash, one of hundreds he would take out that week. Meza was referring to an agreement in 2009 between the university and its service workers unions, including Meza’s union, AFSCME (American Federation of State, County and Municipal Employees). At that time, the administration established a minimum wage (currently $13 per hour) for the more than 7,000 service workers and agreed, if funding was available, to increase wages annually to bring their low-wage workers out of poverty.

But the university is going back on its promise, refusing to increase wages with the funding dedicated for that very purpose, the East Bay Alliance for a Sustainable Economy and the Partnership for Working Families (EBASE) notes in its recent report titled “Bad Budgeting, Broken Promises.”

As the UC Office of the President sees it, the 2009 discussion was not an agreement at all, but a “conditional memorandum of understanding” that would only be effective if state funding was available, said UCOP spokeswoman Dianne Klein.

The state budget vetoed by Governor Jerry Brown last week would have set the UC system back $150 million in cuts on top of the $500 million in cuts approved by Brown in January. How much more will actually be cut from UC funding remains to be seen, but the forecast is not promising.

Despite the cuts, the proposed budget bill states that $3 million in distributed state funds should go toward the salaries and benefit of service workers in the UC system. In a March 24 letter to the governor, UC President Mark Yudof requested that the governor veto that restriction so the university could use the dedicated $3 million “to preserve our flexibility in dealing with the $500 million reduction.”

Compared to the total UC budget of $21.8 billion, that $3 million makes up only 0.014 percent — nickels and dimes to give employees a living wage.

Meanwhile, Meza and his fellow coworkers struggle to put food on the table, making ends meet by working two jobs. After his 4 a.m. to noon Monday through Friday shift, Meza works eight-hour shifts as a car mechanic on weekends. Similarly, many UC service workers collect cans to get a few dollars from the recycling center.

“When I started here 20 years ago, I was making close to $9 an hour. That wasn’t enough,” recalled Meza, who put his four children through public high school on that salary. Today, Meza brings home about $2,400 a month, barely enough to cover rent and a few bills at his El Cerrito home.

Meza’s union, AFSCME, is working with UC to lower the workers’ contribution to retirement pensions to 1.5 percent. The university proposes a 3.5 percent pension plan to go into effect this July and 5 percent in July 2012—the same amount requested from top UC executives. At their low wage, that would cost the service workers the equivalent of one biweekly paycheck a year.

“If UC gets its way in 2011, instead of getting to climb that next rung on the ladder out of poverty, [the low wage workers] will take a step backward through a combination of increased contributions to retirement and healthcare and UC withholding a 3 percent raise,” Bas said. “All the while, UC is showering already highly-paid executives with six-figure bonuses.”

In an infamous budget battle that has required the UC system to restructure its quickly diminishing funding from the state, more than 100,000 employees’ paychecks have been reduced while top execs like UCLA Ronald Reagan Medical Center CEO David Feinberg receive thousands of dollars in bonuses. In September 2010, Feinberg’s base pay was increased by 22 percent and he received a $250,000 “retention bonus,” for a total compensation of $1.33 million.

These astounding numbers, as part of a $3.1 million package in bonuses for 37 UC executives last September, were quoted in the EBASE report, using data from the UC Regents website (www.universityofcalifornia.edu/regents).

UCOP says the retention bonuses are necessary “because we pay below market as it is [for top executives’ salaries],” said Klein, and the UC needs to offer huge bonuses to keep the executives from moving to higher paying universities. “You have two options: sayonara or we’ll match it,” Klein said. “You can’t recruit in the classifieds for these people … and you’ll have to replace them for the same money, anyway.”

The bonuses are not state-funded, said Klein, but are taken from research grants, patient care, and even federal funding. But Bas said the problem is with UC’s priorities: “Time and again, they have shown that they can find money to give bonuses or backfill sports programs,” she said. “UC may look at this as a matter of technicalities, but we cannot ignore the stories of employees and their families who are struggling to get by.”

As it stands, UC is short-staffed when it comes to service workers. “We’ve been short-staffed for the last 10 years,” said Meza, who estimates that UC Berkeley employs about 140 custodians, less than one-third of the 460 or so custodians the university employed in the 1980s. The result is that the students suffer, said Meza. “The students are getting the short end of the stick because we can only clean once a week in some classrooms because we’re short staff. We see the students pay a lot with tuition, and they’re getting less.”

Already, student fees have increased by more than 32 percent, and another 8 percent fee increase is pending, reported EBASE. As the state continues to make cuts, students and low wage service workers suffer the consequences.

According to the California Budget Project, a single-parent family needs to make $68,375 a year just to make ends meet in Alameda County. “UC workers have reduced-cost healthcare, so this number could be adjusted downward to $58,544,” said Bas. “For a custodian at UC Berkeley or UC San Francisco making $30,000 or even $40,000 a year, this means working two jobs and collecting cans just to scrape by.”

When his oldest was nine years old, Meza remembers, he used to drive his family to the recycling center to get cash for cans he had taken out of the garbage. “The kids were happy in the car because I was going to get money for food when I recycled cans,” which meant there would be dinner on the table that night, Meza said, apologizing for getting teary-eyed at the memory.

“I just don’t want people who work here to go through what I went through to raise a family,” he said.

No matter how many cars Meza fixes on the weekend, he never seems to have a break from the stress of trying to cover fuel, rent, heating bills, doctors’ bills, and other necessities. He’s only 43, but he feels much older after 20 years of working two jobs, seven days a week, providing for four children on his own.

UC workers, unions like AFSCME and other stakeholders have proposed $600 million in budget alternatives such as reducing the excessive 7-to-1 employee-to-management ratio (at UC Berkeley, the average is four employees to one manager). Yet UC does not appear to be seriously considering these alternatives; its current goal is to take back the $3 million dedicated to its low-wage service workers.

“We think this is a matter of finding the will within the UC administration to do what’s right by honoring their word to protect working families’ a path out of poverty,” Bas said.

Two months ago, Meza and his fellow union members marched into UC Berkeley’s Chancellor Robert Birgeneau’s office and asked him to spend one day in the life of a service worker on campus. He still hasn’t answered their request.

“People are really struggling here. We are committed to working and we give 110 percent — that should be accounted for,” said Meza. “Give us our 3 percent. We earned it.”