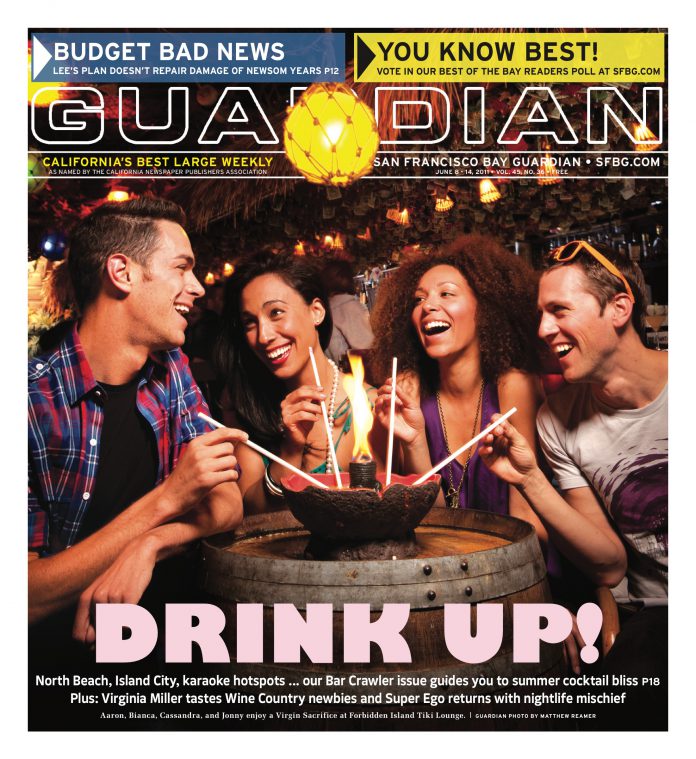 BAR CRAWLER Rumored to have given birth to the snow cone, the Popsicle, and the Kewpie doll back in its amusement park days, Alameda still gives off a summery island vibe. (With Playland at the Beach, Oakland’s Idora Park, and Alameda’s Neptune Beach, the primary mode of transportation in the Bay used to be a Big Dipper. Picture rush hour.) The golden sun, rad flea market, and laid-back neighborhoods — well, the place screams “stay a while.” So you may as well get drunk. FYI, the flatlands crawl works best on a bike, but if you soldier up and walk it, you don’t risk getting tipsy and bloody — to each her own. (Caitlin Donohue)

No, you’re not driving out there. Hop the ferry, ’cause guess what? It’s the first stop on the crawl. Take advantage of the bracing winds to order a beer, or better yet, a bay-ready cocktail. Affable bartenders will recommend a bloody or one of the Campari concoctions that sometimes make the specials board. Take your sweet-ass time and ascend to the top deck with your glass — you have 30 to 45 minutes to kill coming from San Francisco. Once you disembark, you’ll be flush with the possibility of a new island lifestyle. Steady on captain, much boozing lies ahead.

Surprise! Not only is Alameda a great bar town, it’s also home to a burgeoning alcohol-making district. The island’s northwestern blocks — once the Naval Air Station and still fetchingly speckled at the edges with behemoth military boats — went through an era of tumbleweed rule but are now being reinvigorated by pioneer businesses that enjoy the commercial, wide-open spaces that only airplane hangers can provide. St. George Spirits moved here in 2004 and now produces pleasant, not-too-cloying Hangar One-flavored vodkas (mandarin blossom and chipotle versions are amazing), absinthe, superlative Firelit coffee liqueur, and more. Check out the $15 tasting menu in the jovial tasting room and toast to Alameda with every tiny, long-stemmed glass the good saint presents you with.

Don’t worry if your St. George tasting ended with a disorienting absinthe-root beer closer — you don’t have far to bike to the next stop on the crawl. A few hangars over, step into the sleek tasting room of Rock Wall Wines, where you can order flights of swishes from Rock Wall’s father-daughter team plus nine other small wineries that share production space next door in the massive urban vintner hangar-hangout. Feel good about supporting the little guys along with another chance to sample an array of finely-crafted local booze.

So you’re a few drinks deep — time to check out the actual Alameda haunts. Bar! Well, a gym bar. Once you arrive at the Bladium (you’ll pedal past an impressive lineup of battleships on the way), smile sousedly at the front desk of the Bladium athletic center and weave your way through in-line hockey and indoor lacrosse arenas to the comfortable second-floor sports bar, where you can knock a pint back and take in some of the heated amateur action going on among the athletic types below. Don’t let all the secondhand endorphins make you feel lazy — the kind of drinking you’re doing takes endurance.

Enough crawling with the generalists — let’s get dark ‘n’ sugary the way only a quality tiki bar can encourage. Find the flavor at the low-lit Forbidden Island, where there will be a luau in progress, if you play your cards right, and sufficient vats of rum and juice even if you didn’t schedule your crawl around roast pig. Hoist a Neptune’s Garden (it’s blue and has fruit garnishes!) to discovering more about the Forbidden Island’s watering holes and continue on your way.

See how we planned this out? We started with sober sea legs on the ferry, pinky-up tastings while you can still bullshit about noses and mouthfeels, then the limber tiki limbo — enter now the dives. Lost Weekend is a good one, and it’s smack in the center of Alameda’s fun downtown, which is worth a saunter about if you’re feeling a little shaky after Forbidden Island. Otherwise, belly up the bar, gaze at the TVs and myriad ephemera on the walls from hazy sports meccas — Philly? Texas? — and discover that here in the Island City, the jock and black-clad hipster crowds can oftentimes merge into one.

Turn the corner onto Park Street and you, my friend, have come to the end of your bar crawl — lucky for SF residents, it’s on familiar turf. The Lucky 13’s East Bay branch is just as good a rockabilly dive into a heavy, microbrew-tinged blackout as its Castro counterpart. Same wooden tables to back-slap and talk trash over without blazing TVs to distract your train of thought, same walled patio for fresh air and lighting of the cancer stick (yeah, alright, you’re wasted). Two big points for the Alameda Lucky: you can bring in take-out stromboli and french fries from Scolari’s next door — and the Fruitvale BART Station is only a happy downhill ride away when you’re ready for the mainland. Lean your bike against the wall and find a comfy seat for yourself, brave crawler — you’ve earned it.