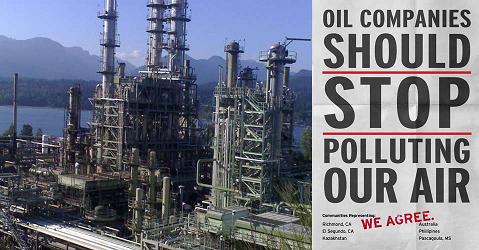 Chevron destroys everything, except profits. And by everything, we mean everything. The Amazon rainforest and its indigenous communities? Check. The Boreal Forest in northern Canada and its indigenous communities? Check. The Niger Delta? Check. Indonesia, Texas, and Iraq? Check, check and check. And even San Francisco’s own neighbor, Richmond, the home of one of Chevron’s largest oil refineries in the world? A big, whopping check.

Not that oil companies taking the lives, resources, and spaces of millions of people is something to take lightly. In fact, the opposition to Chevron is strong and growing, with many people across a network of international communities planning to stand up at Chevron’s shareholder meeting tomorrow (Wed/25) in San Ramon to give faces and names to the enormous destruction the company caused, which coincides with the release of the 3rd annual report on the company’s many misdeeds, The True Cost of Chevron.

At a press conference this morning (Tues/24) at a Chevron station in San Francisco, activists and representatives from places adversely affected by Chevron’s drilling, dumping, land grabbing, and environmental degradation told stories about losing mothers to cancer, women having miscarriages due to contaminated water, clear-cutting forests used by their ancestors for hunting and farming, and losing one’s sense of home.

“I have personally witnessed this devastation,” Servio Curipoma of the Amazon Defense Coalition in Ecuador said of Chevron’s operations within his country. “And I will fight to the bitter end and never give up,” he said after showing a photo of his mother who died of cancer. After an 18-year lawsuit by the people in Educator against the oil corporation, Chevron was found guilty of massive environmental crimes. But Chevron has yet to take note of its transgressions, and aggressively pursues communities at risk of complete disintegration.

Elias Isaac with the Open Society Initiative for Southern Africa spoke about entire fishing communities in Angola going days without catches as they rely on the waters that Chevron polluted through its operations in the country. “The pollution is effecting livelihoods,” said Isaac. “And it’s getting worse.”

Communities for a Better Environment also understands the nefarious ways in which Chevron puts its stock above its virtue. For example, the company doesn’t pay taxes to extract oil from California. “They had the audacity to ask for an exemption from the law,” said Jessica Tovar of the Oakland based advocacy group. Recently Chevron’s Richmond refinery was denied the possibility to process dirtier, heavier crude oil only after opponents went to court to stop the proposal.

The bitter truth, said Antonia Juhasz of Global Exchange and the co-editor of alternative report, is that no matter where Chevron decides to set up shop, the stories are the same: corporate side-stepping of responsibilities to the community, polluted water, love ones lost, environmental disaster that cannot be undone.

Just like the exploitation Chevron is responsible for through its operations across the globe, its profits are also ever increasing. Last year the company made $20 billion in profits, bolstering its standing as the 11th largest corporation in the world, and the largest in California.

In order to make a dent in its exploitative practices, members of different organizations will be voicing their opposition in Chevron’s shareholders meeting tomorrow, some through legal proxies of current shareholders.

There is a resolution activists hope will be discussed that will appoint a third party with expertise who will oversee operations to further prevent environmental disasters, said Mitchell Anderson, the Corporate Campaigns Director of Amazon Watch, which is based in San Francisco.

“We came to tell them that we disagree with their ads. It’s not a rosy image. It’s a lie,” said Juhasz. “Chevron knows how to do better but chooses to do worse.”