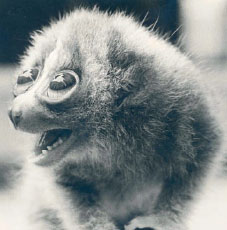 >>AS IF WE WEREN’T ALREADY DISTURBED BY THE TIME WE SPEND WATCHING ANIMAL VIDEOS News broke last week that the slow loris is being poorly served indeed by its onslaught of Youtube celebrity. The poor little guys, native to Southeast and South Asia, are being illegally trafficked due to their increasing popularity as pets, leading to infection-causing teeth removals and other forms of abuse. Sickeningly enough, some of the web’s fave videos (like this one and this one) are actually shown to be footage of hurt animals. Ugh.

>>GETTING CHASED Divisadero neighbors and anti-bankists (or at least anti-other people’s bankists)  are still down on the idea of Chase Bank locating a branch at the corner of Divisadero and Oak streets. Banktivists showed up at an Appeals Board meeting March 16 to air their gripes, along with a contingent of neighbors and others who would rather see a bank branch than the grubby-window eyesore that has reined since Martini Cleaners vacated almost four years ago.  The two businesses everyone liked – Country Cheese and Five Star Truffles (now in the Castro) – are already gone, which leaves one looming question about what Chase will bring: will the Wells Fargo ATM at the back of the building have to go, or do financiers of a feather flock together?

>>GOT PLANS TOMORROW NIGHT? You can meet us at the Lex for penny shots (yes, that means shots of liquor for one red cent) from 8:45-9 p.m., just like every other Tuesday. From 9-10 p.m. it’s two-for-one beers and mixed drinks. Penny shots: the perfect time to get wasted and talk about Abe Lincoln.

>>KILLING US We’re already begun sensei training with neo-soulman Aloe Blacc – gotta pick up those rubber-limbed dance moves – but only because the kid in this video was unavailable.