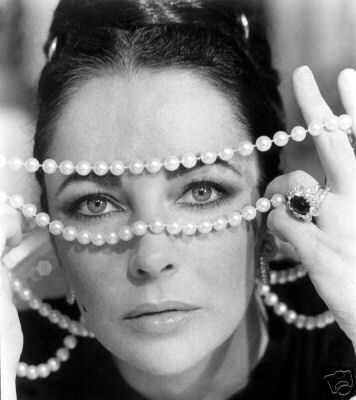 This review originally appeared (as “Liztrionics: Taylor blows hinges off YBCA!”) in the Dec. 5-11, 2001 issue of the Bay Guardian:

“Elizabeth Taylor is my sister. You might as well know it.”

So begins A Superficial Estimation, poet John Wieners‘s homage to the women in his life, including his aunt, Dorothy Lamour, and his mother, Bette Davis. Overtly conflating movie stars with family is A Superficial Estimation‘s gay masterstroke, one typical of the tiny tome’s undersung author. Liz gets the first chapter; Wieners lovingly notes that she “peruses her surroundings with dignity and harmony,” which leads one to believe that he’s describing his sister before the era — 1968 to 1973 — covered in film curator Joel Shepard‘s current Yerba Buena Center for the Arts series “Liz: Unhinged.” Beginning with a Boom! and ending with Ash Wednesday‘s on-screen plastic surgery, these were Liz’s Divine years: the period when she treated audiences to one throttlehold after another, angrily rubbing their faces into her larger-than-larger-than-life image.

This is star power as deadly weaponry. Daring to dive into Liz in the book Deeper Into Movies, Pauline Kael — reviewing X, Y, and Zee — deems Taylor “Beverley Hills Chaucerian,” a “great bawd” with upholstered hair who uses vulgarity as “a form of assault.” Actually, that movie is the sweetest concoction in “Liz: Unhinged”‘s liquored quartet. (Lore has it that Boom!‘s cast began each day with Bloody Marys.) X, Y, and Zee is a sort of Who’s Afraid of Virginia Woolf?-lite, with Michael Caine pinch-hitting for Richard Burton. “I just love eating between meals,” Liz proclaims, but the real bite is in her voice, a tone that translates to “Fuck you! All of you!” Caine and smug other woman Susanna York share precious mmoments (replete with silhouettes in sunset) on the glorious coast of Scotland, but who cares when they’re up against Liz, wearing a gold headband as she roars at her hairdresser, “Yes, I am a bitch! Open and straight!”

Yes, indeed — thank god. Bitchy Liz has been credited as the first major female star to use the word “fuck” in a movie (Boom!), a rather literal factoid; her line readings regularly translate sunny nicety into no-shit-Sherlock sarcasm. When she breaks free from the florid language of Tennessee Williams, Edna O’Brien, and other, less-esteemed screenwriters, unhinged Liz shoots off an arsenal of yuck-yucks, yoo-hoos, grunts, groans, seagull shrieks of panicky delight, and crying jags that mutate into laughing fits. She triumphs over blue eye shadow. She dons kaftans, cloaks, shawls, ponchos, and diaphanous nightgowns; at one point (in Boom!) her ensemble matches the lamps in her room. And then there’s the headwear, one fur hat after another, capped by a piece (also in Boom!) that transforms her cranium into a dangerous stalactite formation. Gorge your eyes before she gouges them out.

Other period details recur throughout “Liz: Unhinged.” Cannelloni is devoured, mineral water flows freely, Liz’s beauty is haunted by Parma violets in not one but two of these burnt offerings: Boom! and Ash Wednesday. Liz herself is a wilted flower in the latter, but then, full-body plastic surgery (captured in loving detail) is exhausting. Especially when it’s meant to win back the arthritic caresses of Henry Fonda. Now, Liz, we know you can do better than that — even if you aren’t sick and tired of wearing loose wraps.

Joseph Losey’s Secret Ceremony locks Liz and a wigged-out Mia Farrow in a mansion to play a fatal game of pseudo-profound, authentically pretentious hide-and-seek. The same director’s Boom!, made the same year (1968) is a sort of debauched Contempt; the film finds Liz dictating her memoirs over an elaborate intercom system and entertaining the Witch of Capri (played by Noël Coward, since Katherine Hepburn — cementing her snooty, uptight image — rejected the part). “Pain…injection!” Liz’s hypochondriac gulps at the outset, shortly before Losey’s portent-laden camera lands on her biggest diamond ring. (Another bit of lore: during this era, Taylor was paid for her jet-setting film roles in rare jewels rather than money.) “Bring me my menthol inhaler and tweezers!” she demands a little later, after coughing up a lung and comparing an X-ray machine to a “baby buggy from Mars.” Death comes in the bedroom, in the form of a bloated, red-eyed Richard Burton.