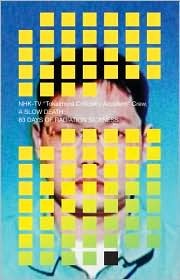 This review originally appeared in the Jan. 7-13, 2009 issue of the Bay Guardian:

John Gall’s art for A Slow Death: 83 Days of Radiation Sickness (Vertical 160 pages $19.95) is unique in a gaze-snatching fashion. It combines hues of yellow and green, block patterns, and a news photo backdrop into an attractive, enigmatic, and faintly disturbing image that makes a browser wonder, “What exactly is inside this book?”

The answer is an account of a nuclear plant worker’s gradual demise after he was accidentally exposed to 20,000 times the maximum tolerable amount of neutron beam radiation. As some alleged environmentalists (including figureheads such as Al Gore) have begun touting the benefits of “non-carbon sources” of energy — an evasive way of saying “atomic power” — Hisashi Ouchi’s death comes across as an extreme cautionary tale.

Credited to NHK-TV “Tokaimura Criticality Accident Crew” and constructed from a television documentary about the nuclear accident, A Slow Death bluntly but compassionately renders Ouchi’s physical symptoms, which included massive skin loss, and the emotional impact his plight had on the doctors and nurses who treated him. The last extraordinary aspect of Ouchi’s story involves his heart, which persevered and remained relatively healthy while the rest of him demonstrated the impact of radiation. As the book puts it, “it continued living amidst the destruction of virtually every other cell in his body.”