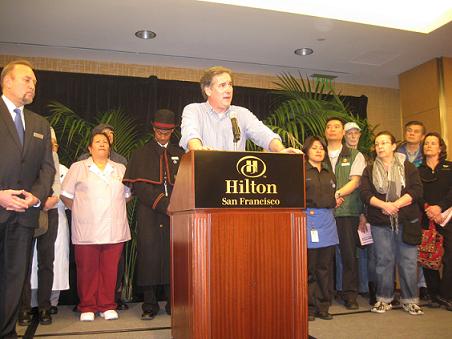 After an 18-month contract impasse, hotel workers in San Francisco landed a breakthrough deal when Hilton decided to settle with its union’s negotiating team, which was announced by both parties in a press conference today.

The tentative contract, which is to last until August of 2013 if ratified by a final union vote, secures healthcare and pension benefits as well a pay increase for more than 800 workers at Hilton San Francisco Union Square, the city’s largest hotel. The deal doesn’t cover other Hilton hotels in the city, whose management Hilton contracts out to other companies.

“With this agreement, workers and the company alike can look forward with confidence as the hospitality sector continues to emerge from the recent recession,” said UNITE HERE Local 2 President Mike Casey.

Hilton General Manager Michael Dunn said, “We are glad to have a contract that is fair to the hotel and the union.”

The settlement includes provisions for continued, fully-paid health benefits, pension improvements, a $2 per hour wage increase and workload reductions. Union leaders would be able to take up to four days off a year specifically for leadership trainings as well

As for why they reached a settlement at this moment, both sides pointed to the recent increase in occupancy rates and the length of the stalemate.

But Casey also stressed the importance of the unified struggle by workers. “By and large it is the workers’ determination to go one day longer than the bosses. [Management] settles when the cost of the fight exceeds the cost of settlement. It is a business decision for them.”

About 8,000 hotel workers in San Francisco still await a resolution to their negotiations and the Hilton contract is largely seen as the blueprint for all pending deals. Hilton broke rank with the other big hotels in the city in a move that many said is characteristic of its “leadership.” Dunne said, “the decision is strictly for Hilton” and was not made in coordination with other hotels.

The Hotel Council of San Francisco has yet to respond to requests for comment. The union officially called an end to the boycott against Hilton and will now focus on winning contracts in the remaining campaigns. “While this is a watershed event in this campaign, the fight is by no means over,” Casey said. “There are still 50 plus hotels that need to come to their senses and settle with us.”

The rank and file of the union echoed the same sentiments. Weary after a prolonged struggle they are nevertheless determined to extend support to other workers. Jacov Awoke, a Hilton doorman for 20 years said, “Our struggle continues with other corporations. Our sisters and brothers need the same contract.”

Connie Hibbard who has been a server for almost 30 years at the Westin St Francis Hotel, said she was “hopeful. I have the confidence they understand and respect their employees.”

It is unclear at this point whether the Starwood Hotels and Resorts Worldwide, owner of the Westin St Francis, plans to follow suit, however, since they canceled scheduled labor negotiations at the last minute, after hearing about the Hilton deal. Casey said they “continue to be extremely hostile to interests of workers.” But that the “boycott that is going to escalate,” using resources freed up by the Hilton deal. He also said that the campaign to pressure Hyatt would also be important in the coming weeks.

Neither hotel chain had yet responded to requests for comment. Casey recognized the importance of this win for labor in the midst of a massive struggle for unionized public employees all over the county. He said, “We are one movement. What happens in one industry affects other industries.”