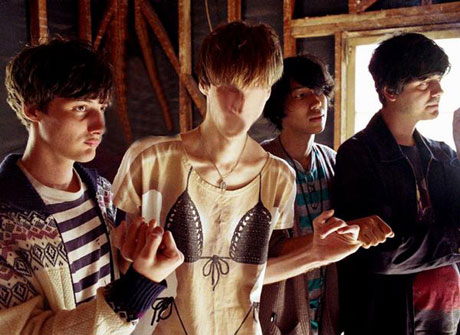 Before our car ride home discussion of some of our favorite parts of the show, my friend and I had already agreed on something; holy shit that was loud. Playing to a sold-out crowd in its first of two back-to-back San Francisco shows (10/29), Deerhunter put on a raw, visceral, sometimes loose but often amazing set that pierced through the relatively small confines of the Great American Music Hall.

Walking onstage, front man Bradford Cox grabbed the mic and gazed into the crowd. “You guys look like you wanna have fun. I like that in an audience,” he said. After someone screamed out his love for him, Cox quickly replied, “Don’t forget about Lockett Pundt (guitar),” just as the band launched into the Pundt-penned and -sung “Desire Lines.” While Cox usually and deservedly gets a lot of Deerhunter’s press attention, it should be noted that Pundt is a spectacular guitarist and songwriter in his own right, and seems to be a huge part of the band’s sound.

The opener set the tone for what naturally would be a set heavy on tunes from the band’s excellent new album, Halcyon Digest (4AD). What I hadn’t expected was the blistering distortion and pounding drums that a couple of that album’s mellower, poppier songs would take on. The twisted, bubblegum pop of “Don’t Cry” transformed into a grungy monster with a life of its own, while “Memory Boy” sped up a tad to add to the urgency of Cox singing “It’s not a house anymore” in the chorus.

A couple opportunities to show off the band’s more precise, ambient style arose throughout the set. The deceptively dreamy “Helicopter” translated perfectly and drummer Moses Archuleta included what sounded like sampled drum hits coupled with his live kit. Halcyon Digest’s closer, the seemingly African-influenced “He Would Have Laughed” floated along on a repeating, looped guitar line while waves of controlled noise and feedback ebbed in and out.

After a few minutes offstage, Cox came back solo for an encore that started with him covering Scott Walker’s “30 Century Man” with just an acoustic guitar. He played it straight, which was nice and almost surreal to see after the wall of noise throughout the night. Next, the rest of the band rejoined him and launched into a ten-minute jam that had Cox aggressively attacking his guitar to pull out short bursts of dissonant squeals and screeching solos. The song built up tension slowly (maybe a little too slowly) and then eventually released with a closing minute or so of loud thrashing. A little more paring down would have added to the overall effect, but it was still a solid way to end the evening.

Deerhunter’s widening appeal became glaringly obvious as I walked out amongst groups of grungy teenagers, appreciative old-timers, stoic hipsters, and the annoying drunk guy who had been stepping on everyone’s feet and obnoxiously trying to start out-of-rhythm, mid-song clap-along sessions all night (Hey man, you’ve successfully pulled everyone’s attention away from the band and onto you. You win!). But ultimately, even the kid holding his head throughout the show with a look of “I didn’t realize I’d signed up for this eardrum fucking” walked out with a big smile on his face.