Home Alex Cox goes "Straight to Hell" (and to the Roxie) 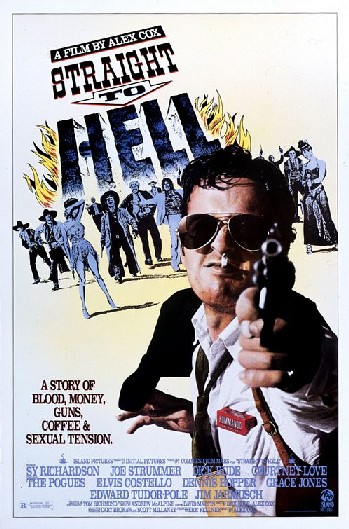 If you’re looking for a Halloween film fix outside of the usual slasher movies and traditional fright night fare, the Roxie’s got you covered.

Starting Fri/29 and running all weekend, the theater has a series of cult picks lined up. Friday night brings old-school sci-fi flicksThe Creature with the Atom Brain (1955) and The Man From Planet X (1951) to the screen in 35mm archival prints. Sat/30, check out the UK gore-fest Corruption (1968) or The Brood (1979), one of David Cronenberg’s first films. And on Sun/31, there will be a double Halloween dose of director Alex Cox, with Straight to Hell Returns (2010) and Searchers 2.0 (2007), complete with an appearance from Cox himself.

A cult favorite due to his work directing Repo Man (1984) and Sid and Nancy (1986), Cox originally released Straight to Hell in 1987. This updated version includes technical touchups in both sound and color design, and also features deleted scenes with “enhanced violence and cruelty.” A surreal cast with the likes of Joe Strummer, Elvis Costello, Dennis Hopper, Courtney Love, and Jim Jarmusch populates this bizarre, darkly comic mash-up of crime and spaghetti Western genres. The film follows a group of criminals who take cover in what they believe to be a deserted ghost town after robbing a bank. Instead, they soon find the town full of seedy shopkeepers, violent punk rock banditos, and jittery locals with a coffee obsession.

Strummer is probably the best of the “non-actor” bunch, pulling off his role as one of the crooks in believable enough fashion. Courtney Love on the other hand puts in an obnoxious performance that may have been Roseanne Barr’s National Anthem inspiration at the 1990 Super Bowl. Irish-punk band the Pogues (who also co-star) provide a strong score full of mariachi-style flourishes, which sets the scene for the film’s send-ups of shootouts and tough guy bravura.

Straight to Hell’s plot is scattered at best and often doesn’t make a lick of sense, but that’s not where its appeal lies anyway. The film’s charm is in the loose, DIY-style of its creation. It also seems to have been a huge inspiration on Quentin Tarantino, who must have lifted his ideas for Samuel L. Jackson’s character in Pulp Fiction straight from Sy Richardson’s performance as Norwood. It all isn’t quite as fun to watch as it must’ve been to make, but fans of freewheeling filmmaking will still find a lot to enjoy.