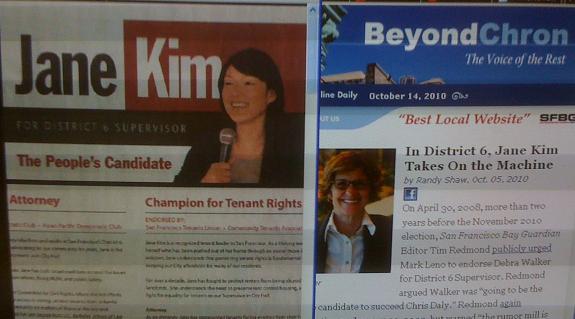 A political mailer promoting progressive supervisorial candidate Jane Kim was funded primarily by former Mayor Willie Brown through a campaign committee that Kim consultant Enrique Pearce helped start and which was located in his office, the latest strange development in a race that is dividing the progressive movement at a crucial moment and prompting a nasty public debate over political “machines.”

It’s illegal for campaigns to coordinate activities with independent expenditure committees such as New Day for SF, which put out the glossy mailer proclaiming “Another renter supports Jane Kim for District 6 Supervisor” and calling her “The people’s candidate.” The most recent campaign finance statements, filed Oct. 4, listed the group’s treasurer as USF student Brent Robinson and the contact number being that of Pearce’s Left Coast Communications, where Robinson worked.

Pearce told the Guardian that he was involved in starting New Day for SF, but that he severed ties with the group and Robinson “about a month ago” when it seemed they might support Kim. “When it started to go down that path, we said that we can’t do that,” Pearce said, adding that he didn’t know why the forms still listed his phone number or why the receptionist in his office took a message for Robinson from the Guardian, although Pearce said they share a receptionist with other organizations. On Oct. 5, a day after the intial filing, the group filed a form to amend Robinson’s phone number.

The campaign finance form shows the group raised $9,200, including $5,000 from Brown on Sept. 30 and $2,500 from Twenty-Two Holdings LLC, which last year applied for a liquor license for the Wunder Brewing Co. Robinson did not return our calls for comment.

The Bay Guardian and other progressive voices used to decry the corrosive influence on San Francisco politics of the Democratic Party political machine established by Brown and former California Senate President (and current state party chair) John Burton. Although that machine is dormant now, the concept of machine politics has been revived in this election cycle by Kim and her allies, adding an ironic note to her support by Brown.

“I’m not a part of anyone’s machine and I’m certainly not a part of anyone’s master plan,” Kim declared during her June 24 campaign kickoff party, where Brown and former Mayor Art Agnos made an appearance. When I highlighted the remark in my coverage of the event, and its inference that Kim’s progressive rival Debra Walker was supported by a budding progressive political machine, it triggered a raging political debate about the concept that continues this day.

The nastiest salvos in that debate have recently been fired at the Bay Guardian and the San Francisco Democratic Party Central Committee – accusing us of being part of a political machine supporting Walker and excluding Kim (who got the Guardian’s #2 endorsement) – by Randy Shaw on his Beyond Chron blog. Shaw is one of two staff writers on the blog, along with Paul Hogarth, a Democratic Party activist and Kim campaign volunteer.

Shaw founded and runs the nonprofit Tenderloin Housing Clinic, which has millions of dollars in city contracts to administer SRO leases through Mayor Gavin Newsom’s Care Not Cash and other programs. He started BeyondChron a few years ago with seed money from Joe O’Donoghue, who was then president of the Residential Builders Association, a developer group that has sometimes clashed with Walker in her capacity as a member of the city’s Building Inspection Commission.

On Oct. 5 and then again on Oct. 12, Shaw wrote and prominently posted long stories promoting Kim’s candidacy and attacking us and the DCCC for not supporting her more strongly. In the first one, “In District 6, Jane Kim takes on the machine,” Shaw defended Burton but shared the Guardian’s criticism of how Brown behaved as mayor.

“Brown’s power was strictly personal, as became clear when his chosen Supervisor candidates were defeated in the 2000 elections,” Shaw wrote, criticizing political machines and writing that the progressive political movement is not “served when those seeking to run for office feel they must choose between ‘playing ball’ with political insiders and giving up their dreams.”

But is it possible that Shaw’s strident campaigning against Walker – indeed, his protege Hogarth planned to challenge Walker before Kim decided to get into the race – was prompted by Walker’s unwillingness to “play ball” with Shaw and his RBA backers? Should we be concerned that it’s actually Shaw who’s trying to build his own little political machine?

I’ve tried to discuss these issues with Shaw and Hogarth, including sending them a detailed list of questions (as has Guardian Executive Editor Tim Redmond), but they’ve been unwilling to respond, just as they were unwilling to contact us before writing two divisive hit pieces that were riddled with inaccuracies that they’ve refused to correct.

I’ve also left messages with Kim and others in her campaign to discuss machine politics and its implications – as well as Sup. Chris Daly, asking about the sometimes close relations that some progressive supervisors have had with Shaw and RBA developers over the years [UPDATE BELOW] – and we’re waiting to hear back.

But Pearce said voters shouldn’t read too much into a relatively small political contribution from Willie Brown, or from the “colorful writing” of Randy Shaw, emphasizing Kim’s independence and saying that was always what she intended to stress when she raised the specter of machine politics tainting the race.

UPDATE: Daly and I just connected and he had an interesting take on all this. He noted that when Brown was mayor, the base that he brought together included the RBA, Rose Pak and the Chinatown power brokers (who also seem to be backing Kim, who used to work as an activist/organizer in that community), and, improbably, both Labor and Downtown.

“But that’s not Gavin’s alignment, his alignment is just downtown. The RBA guys hate Gavin, mostly just because of who is is, a silver spoon guy who never worked a day in his life,” Daly said. So Matt Gonzalez, the board president who ran against Newsom in 2003, formed an alliance with the RBA and O’Donoghue, who already had a long relationship with Shaw, both personal and financial.

Daly also said that he thinks it’s a personality clash more than anything else that is driving Shaw’s opposition to Walker: “He just doesn’t like Debra.” In turn, that sort of personality-based politics — more than any differences in ideology, vision, or qualifications — is souring people in the two political camps on one another as this close election enters the home stretch. But will those resentments linger after this election? Probably, Daly said, although he plans to actively try to mediate the divide once the dust clears on this race.

“Luckily, we have a lot of young people entering the progressive movement,” Daly said. “There’s always a rejuvenation going on and one day the new leaders will be like, ‘Why do that guy and that guy hate each other?’ ‘I don’t know, I think it had something to do with the 2010 election.”