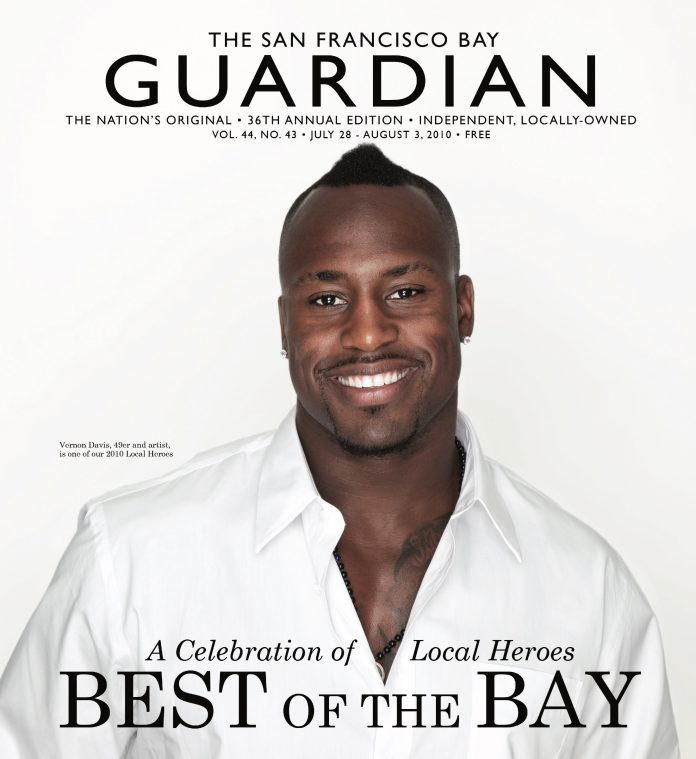 Welcome to the San Francisco Bay Guardian’s Best of the Bay 2010! This is our 36th annual celebration of the people, places, and things that make living here such a ridiculous joy — from Best Burrito and Best Amateur Sports Team to Best Strip Club and beyond.

Thousands of our readers voted in our 2010 Best of the Bay Readers Poll for their favorites in more than 200 categories. You’ll find the results inside — as well as 150 Editors Picks that highlight some Guardian favorites, old and new, that we think deserve special recognition for lighting up our lives this year.

This year our theme is “A Celebration of Local Heroes.” We’ve chosen eight individuals who we feel embody the current spirit of the Bay Area and its unique values. We hope you’ll be as inspired by their stories as we are. But really, our readers and everyone who contributes to making the Bay Area a better place to live are our local heroes. So throw on that magic cape, hop on your pedal-powered Batmobile, and let’s do it!

Editing this year’s installment was a hoot. I shower grateful smooches on all my collaborators, especially my right-hand amiga Caitlin Donohue, creative wiz Mirissa Neff, amazing Local Heroes photographers Keeney + Law, the totally rad Blue Sky Studios, photographer Ben Hopfer, and the ever-supportive Hunky Beau, my own personal Best of the Bay. But most of all I thank you, dear reader, for your generous participation, for making the Bay Area such an astounding place to live, and for turning us on to some great new things this year.

The Guardian’s free annual Best of the Bay party is legendary — and you won’t want to miss this one. Schmooze with all the winners at Mezzanine! Rock out with Chuck Prophet, Stephanie Finch and the Company Men, and The Bitter Honeys. Thrill to the hip-hop improv of The Freeze! DJ Ome, Polite in Public photobooth, Burgermeister truck, and more!

BEST OF THE BAY STAFF

BEST OF THE BAY EDITOR

BEST OF THE BAY PHOTOGRAPHY

Michael Keeney and Jasmine Law met at the Brooks Institute of Photography. It didn’t take long for them to realize that their approaches complemented one another. Together they are Keeney + Law, a team that successfully balances being both professional and life partners. In photography, their shared vision is based around the idea of a vignette, where every photo is a short story with an emphasis on good light. Always striving to connect with their subjects, Keeney + Law’s collaborative process was a perfect fit for this year’s Local Heroes portrait project.

The Guardian’s Local Heroes portraits were shot at Blue Sky Studios in San Francisco (with the exception of Vernon Davis, who was shot on location by Peter Bohler). We used Blue Sky’s state-of-the-art Light Grid, which is the first fully robotic lighting mechanism of its kind.