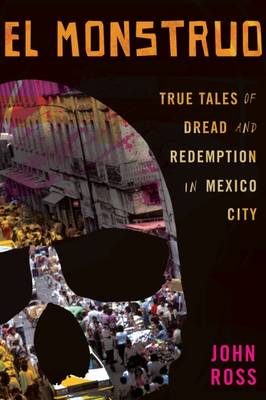 I am on a low-rent book tour with my new cult classic El Monstruo – Dread & Redemption In Mexico City.  For the next three months, I will stumble across this land from sea to stinking sea probing the underbelly of Obama’s America.  The findings will be posted on these pages.

1.
First stop was the near north woods, Humboldt County USA, to wheedle the medicos into granting me a clean bill of health before I hit the road.  A year ago this February, my doctor who has poked and probed my old broken cadaver for nearly 20 years, pronounced me dead. “Liver Cancer” he parsed gravely — but I am still alive and kicking. The class enemy be warned: I am not dead yet.

Humboldt had just been wracked by a 6.5 earthquake that cut a swath through Oldtown Eureka’s antique shops but was not quite Haiti.  Nonetheless, the shake-up worked its usual bad mojo and implanted the seeds of fear and loathing in every soul.  On January 22nd, three separate police agencies shut down the north end of Arcata and evacuated hundreds of residents after a scruffy hippie-type tried to fed ex a suspicious package to Berkeley that leaked, according to the clerk at Kinko’s, “a chemical odor.” The offending package was blown up in a back alley.

The next day, the local rag commonly known as the Times-Slander conceded in front-page headlines that the “bomb” was “Actually a brake light.” The paranoia was symptomatic.  A commercial jetliner to Kentucky was forced down by air force jet fighters after an orthodox Jewish kid pulled out his Tefillin to pray and, in a spasm of extreme religious irony, the panicked stewardess took him for some Muslim terrorist and confused the leather straps and little prayer boxes with bomb components that would blow the paying customers to kingdom come.

Nine years ago, just weeks after 9/11, I got on the road to preach Zapatismo to the North Americanos. Flags flew from every home, a sort of Talisman against the terrorist devils.  It was not a healthy ambiance for spreading revolution and resistance in Amerikkka.  Prospects for the Monster Tour suddenly turned ominous.

2.
San Francisco’s Mission District gets shabbier day by day as the “Great Recession” (read “Depression”) gallops towards economic Armageddon. The Miracle Mile is lined with empty storefronts and 98 Cent Stores (marked down from 99.)  The homeless sleep under their shopping carts – the Mission Local reports that 40 homeless families are living in 16th Street Single Room Occupancy hotels, twice the occupancy rate of a year ago.  In this Sanctuary City for the rich, the yuppie Mayor, who now aspires to be nothing more than a yuppie clerk in a yuppie wine store, is deporting undocumented teenagers convicted of no crime and the class divide seems more brutal than ever.

We posted up on Market Street in front of the Commonwealth Club, where torture enabler John Yoo was hawking his new book to the City’s elite. Financial District drones en route back to the ‘burbs asked Yoo Who?
I checked my watch.  It was time to hit the rails.

3.
The Central Valley was the first stop on the Monster Tour, the most deadly stretch of soil in North American California. The water plumes are all poisoned by agrochemicals and when one turns on the faucet on the west side of the valley, deformed babies pop out.

This cesspool of chemical effluvia is populated by perhaps the most ethnically diverse crazyquilt in all of Obama’s America.  Anglo bigwigs and white Armenians rule the roost but down below Mixteco is spoken on the radio, communicating the bad news to the out-of-work Oaxacans who once toiled in the fields and packing sheds. The humongous Hmung community is up in arms over the FBI’s harassment of their spiritual leader, General Vang Pau who authorities accuse of conspiring to overthrow the doctrinaire Communist government of Laos.  Unemployed Palestinians and Pakistanis, Filipinos, white trash, and historic enclaves of Blacks, survive in this fulminating chemical stew by their wits. On every street corner, the down-at-the-heels don shabby green gowns and sagging Styrofoam Statue-of-Liberty crowns, holding up cardboard arrows pointing towards strip mall tax return scammers.

I stepped out into Catherine Campbell’s unplanted garden.  Police helicopters hovered overhead, searching out suspected gangbangers. Catherine is a veteran prison rights attorney who pays particular attention to what goes on behind bars at Corcoran and Chowchilla, two of the cruelest his & her lock-ups in the state. Recently, she put her know-how to work defending anarchists who had been beaten into the sidewalk by the Fresno pigs for handing out graphic leaflets depicting the torture of elephants during Ringling Brothers Barnum & Bailey’s annual visit to town, and she and a gaggle of advocates have been trying to keep the cops off a venerable homeless encampment. Now the City Council is seeking to felonize panhandling on Fresno’s median strips as a “safety hazard.”

The Fresno gendarmes are particularly keen on persecuting young adults of color for alleged gang activities. An article in the Morning Bee reported on the so-called “Bulldog Gang” (the bulldog is the icon of the Fresno State football team so gang colors are readily available) whose members were accused of smashing windows and barking at the cops over on the decrepit west side.  Catherine says the bulldogs’ bark is more a growl.  Such are the sounds of hope in the second year of Obama’s lacerated reign.

Sam Stoker is a child of the Valley. One night last summer, I bought him a beer at the counter of my beloved Café La Blanca back home in the Centro Historico of Mexico City.  Sam, an acculturated Chicano, had journeyed to Mexico to connect with his family in Tamaulipas and bum around, sniffing out what was left of the 2006 rebellion in Oaxaca. When he went home to Winton near Merced, he spoke enough Spanish to delight his grandma.

Sam is also an anarchist and a budding journalist who has been up to his neck in the struggle for justice for Oscar Grant in Oakland. Now he had come to the Valley to spread the virus of anarchism. Rebellion in the fields could bring California to its knees, he confided. I was only too happy to help out.

Anarchism has a beachhead in Fresno at the Infoshop where 70 folks turned out to hear me preach revolution. Not all of the fellow workers were young punks. One gentleman in attendance told me he had been an organizer for Cuauhtemoc Cardenas’s foiled presidential campaign in 1988 in Sinaloa and fled Mexico when dozens of his companeros were gunned down by the mal gobierno.  He was still here, still waiting for the revolution.

Over in Merced, I shouted out my poems in a long dark bar, The Partisan, on Superbowl Sunday.  A “digital remix” of Guy Debord’s “Society of The Spectacle ” preceded my incendiary words.  Maybe Sam Stoker’s pipedream is not as wacky as it sounds.

4.
So it was goodbye to Fresno and hello to Hollywood. I accessed the City of Fallen Angels over the Grapevine with a pit stop at Bob Hope airport and a bar in Santa Monica to watch the Lakers kick booty. My gigs were spread out all over this pedestrian unfriendly megalopolis and the signs of hard times were hard to avoid.  On the beach in Santa Monica, excruciatingly gaunt old men jogged against debilitating cancers and aging hippies scoured the sands with metal detectors for spare change.

Even out in ritzy Claremont, where I hobnobbed with a Palestinian restaurateur about the Nakba, Obama’s America seemed out of synch.  A student at Pomona College where I spieled had just been handcuffed and interrogated by transit security cops in Philadelphia for transporting 200 Arabic-English flashcards across state lines and some cad ripped off my cane down at the train station.  The Inland Empire, which abuts this restricted enclave, has the fifth highest mortgage foreclosure rates in the nation.

In Hollywood, where I spent a night on my favorite sofa, the glitz was tempered by the homeless with all their possessions piled high atop their shopping carts around the new Metro station. How many of them were out-of-work script doctors is not yet known.

Down in South Central, where anger is endemic, I spoke to a handful of Afro-Americans at Eso Won, an admirable black bookstore. The proprietor sported a prototypical pork pie hat and told me that when he sees the Mexicans coming over the border, he sees black people. We talked animatedly for a few hours about Afro-Mexicans who were a third of the population of Mexico at liberation from Spain in 1810 and whose history has been pointedly ignored south of the border.

L.A. is gearing up for the trial of killer BART cop Johannes Mehserle, Oscar Grant’s assassin, that will be held in the same court house where O.J. won acquittal — if it’s not moved to Ensenada, taking a cue from outgoing Governor Terminator’s plan to build California prisons south of the border.

Students at Cal State L.A., the most Chicano university in Califas, honed in attentively when I expounded on the revolution that is brewing down south.  1810-1910-2010 – every hundred years on the tenth year of the century, Mexico explodes in violent social upheaval and even the Wall Street Journal is worried (see WSJ front pager January 15th.)

Looking at Obamalandia through the eyes of students is a useful handle for understanding what comes next.  Classes and services have been bludgeoned by budget cuts and the profs at Cal State furlough one day a week to make ends meet in this damaged economy that the President lies is booming again because only a half a million workers filed first time unemployment claims last month.  The light at the end of the tunnel is a bullet train pointed straight at the heart of the people.

All of this bad news is healthy for fightback.  The day I hit El Ley, Muslim students at U.C.-Irvine rose up against the Israeli consul ten times in a single speech until the university president sicced the campus cops on them. The next day a whole coast away, kids at Georgetown shouted down General Betrayus. Throw in the cutbacks and the furloughs and the hopelessness and it could be a long, hot spring semester and it won’t be just because of global warming.  I will do my best to fan the flames as I stumble front one campus to the next in the coming months.

On my last days in the late great golden state, I slept in a yoga house under a colorful banner of Ganesh, the elephant guy who gets fat eating others’ obstacles.  Lets hope he’s on my side. A year ago I was sentenced to death and although I’m still kicking, the future is laced with sharpened punji sticks, not the least of which incubates on my liver.

Talking truth to power is still the best medicine to beat back Nuestra Senora Santa Muerte.

John Ross and The Monstruo will be visiting the Narciso Martinez Cultural Center in the heart of the Rio Grande Valley Sat. Feb 20th. The Monster Tour plays El Paso, Las Cruces, and Albuquerque from Feb. 21st-28th.  Consult the Nation Books page for details or write johnross@igc.org