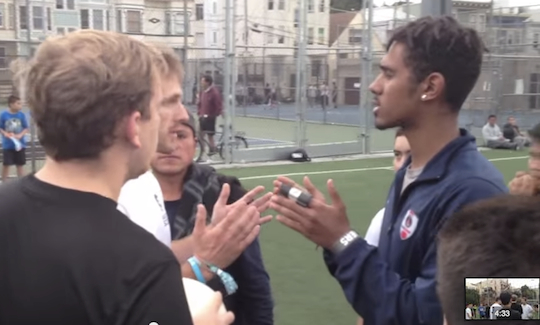 Mission neighborhood tension has never been higher. The tech fueled boom has predominantly white and Asian newcomers butting heads with Latino neighbors who are long-time residents.

The newest scuffle is over a small patch of green: Mission Playground’s soccer field, located on Valencia between 19th and 20th streets.

A video now making the rounds captures an argument between Dropbox employees and Mission neighborhood kids. The Dropbox employees, including designer Josh Pluckett, argue they’ve already paid for and reserved the field.

The Mission youth counter that the field historically has always been pick-up-and-play (first-come, first-serve), no reservations required.

The video has many startling moments, highlighting the divide between the two groups. Can we all just acknowledge the oddness of a Latino man asking a white tech dude to “show me your papers,” as he asks for his soccer field use permit? Later in the video, things really heat up.

“Just because you’ve got the money to book the field doesn’t mean you could book it for an hour,” one taller youth tells the Dropbox employees. When the dudes-in-Dropbox-shirts explain they paid $27 to rent the field, the kid replies “It doesn’t matter, this field has never been booked. How long have you been in the neighborhood bro?”

The Dropbox employee responds “over a year.”

Another one off camera says “Who gives a shit? Who cares about the neighborhood?”

“I’ve been born and raised here for my 20 years, and my whole life you could just play here,” the youth responds.

On the surface this is a gentrification argument: the kids may not be able to afford regular use of the field, wheras those with big dollars can pay up for use. But the incident also highlights the problem with privatization of our public spaces.

As Mission Local pointed out, the field used to be concrete pavement, but neighborhood folks still played soccer. And damn, they played soccer, injuring themselves frequently on the asphalt. That was then. Now, you’ve got to pay to play.

Renting out the field for only one night costs $27 per hour, but to rent the field regularly (like neighborhood kids playing weekly would have to) costs $5 to $10 per player per week. What kid has that kind of money on a weekly basis?

The Guardian has long covered the privatization of neighborhood parks, a charge led largely by Recreation and Parks Department General Manager Phil Ginsburg.

Connie Chan, a spokesperson for RPD, responded with this statement:

She also shared this image of Mission Playground signage:

It’s a matter of history that much of Golden Gate Park, including the arboretum, used to be free (or rather, paid by our tax dollars). In a movement that started over five years ago, San Franciscans now pay a premium to enjoy many park amenities throughout San Francisco.

“What a lot of us think the Recreation and Parks Department is actually doing is relinquishing the maintenance of park facilities to private entities,” Denis Mosgofian told the Guardian in 2011, when the park privatization battle heated up. Mosgofian founded Take Back Our Parks following his battles with the RPD over the closures and leases of rec centers. “They’re actually dismantling much of what the public has created.”

Proposition I would ease city rules and public democratic processes around park construction to allow the rapid creation of many more astroturf fields. If it passes this November, you can look forward to seeing many more arguments like the YouTube video above.