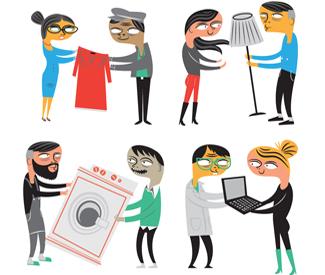 The San Francisco Board of Supervisors today approved controversial legislation to legalize and regulate short-term housing rentals to tourists, voting 7-4 on the package after supervisors narrowly rejected a series of amendments to rein in an activity that has taken thousands of units off the market for local residents.

Amendments to limit hosted rentals to 90 nights per year, to require that Airbnb pay about $25 million in back transient occupancy taxes it owes the city before the legislation would go into effect, to exclude in-law units from eligibility for short-term rentals, and to limit rentals in single-family home neighborhoods failed on a series of 5-6 votes.

Sups. John Avalos, David Campos, Eric Mar, Norman Yee, and Jane Kim voted as a block on the amendments to limit the scope of short-term rentals facilitated by Airbnb and other companies, as a broad coalition that includes tenant, landlord, labor, neighborhood, and affordable housing groups had sought. Kim parted from that block to vote yes on the final legislation, which the others opposed.

Amendments proposed by Kim to give housing nonprofits the right to file injunctive lawsuits to help enforce the legislation and by Campos to ban short-term rentals in units that have been cleared of tenants by Ellis Act evictions were approved 8-3. But because those changes were substantial, they were turned into trailing legislation that must go back to the Planning Commission.

Despite a series of amendments since Board President David Chiu proposed the legislation over the summer, its basic tenets have changed little. It requires short-term rental hosts to register with the city and rent out only their primary residence, which they must live in for at least 275 days out of the year, with the Planning Department enforcing the regulation on a complaint basis.

That effectively limits the rental of entire homes to 90 days per year, but Chiu, Airbnb, and its hosts strenuously rejected calls to extend that cap to hosted rentals, such as spare bedrooms that might otherwise be available to permanent city residents. Chiu said his legislation was “framed through the lens of our housing affordability crisis,” arguing that many San Franciscans rely on Airbnb income to make their rent.

Avalos said he understands that position, but he said tourists shouldn’t be displacing San Franciscans, proposing the 90-day limit on all short-term rentals. “I think it’s important to maximize our residential housing stock to the utmost,” he said. Mar also voiced strong support for extended the cap, criticizing the “cult-like” beliefs by some home-sharing advocates.

As I’ve been reporting in the Guardian over the last two and a half years, Airbnb and its hosts have been openly defying city laws against short-term rentals, as well as ruling by the Tax Collector’s Office that the city’s transient occupancy tax (aka hotel tax) of about 15 percent applies to short-term rentals.

Airbnb just began to collect that tax for its guests last week, but Campos argued that it should pay those back taxes going back to the city ruling in the spring of 2012 before the city legalizes and validates its activities. Company representatives have said its TOT collection would total about $11 million per year.

“I believe it’s only right that Airbnb make good on its back taxes before this legislation becomes law,” Campos said, arguing this $10 billion company is being rewarded for defying city regulators. “Do we give special treatment to a multi-billion-dollar company?”

But supporters of the legislation were anxious to move it forward, despite the dizzying series of complicated amendments, something Avalos said was unusual. “I’m surprised it was given the green light to leave today,” Avalos told reporters after the vote. “There was a lot of pressure to move it forward.”

Now the question will be whether the Planning Department can effectively enforce the regulations, particularly given that Airbnb has been unwilling to share data that might help in that effort. City officials have seemed powerless to enforce laws against short-term rentals that have been on the books for decades, even with rising public concern about the issue over the last year.

“I’m concerned that the legislation simply isn’t enforceable,” Kim said, arguing for the private right of action component that will be returning for board consideration in the coming months.

The other question is whether we’ve heard the end of an issue that has polarized city residents, or whether the coalition of opponents will succeed in a threatened initiative campaign to put more stringent new short-term rental regulations before voters next year.

Sup. Mark Farrell thanked Chiu for taking on the issue despite the intractable positions on both sides, saying, “I think everyone recognizes this to be a no-win situation.” Wiener are referenced the wide emotional divide on the issue: “The views around it are so intensely divergent.”

“The status quo is not working. This system of home sharing is happening in the shadows with little or no oversight,” Wiener said. “It’s time to bring it out of the shadows.”

Even supporters of the legislation, such as Breed, said they would continue closely monitoring the situation to ensure the legislation helps curbs widespread abuses of lucrative short-term rentals, including landlords evicting rent-controlled tenants to use Airbnb and entrepreneurial tenants renting out multiple apartments through Airbnb, practices Chiu sought to curb.

“The one thing that I think everyone can agree upon is the status quo is not working,” Chiu said early in the hearing.

After the legislation — which comes back to the board for a perfunctory final vote next week and goes into effect in February barring legal challenges — Airbnb’s Public Policy Director David Owen told the Guardian, “It’s a tremendous step forward and we have a lot of work to do.”