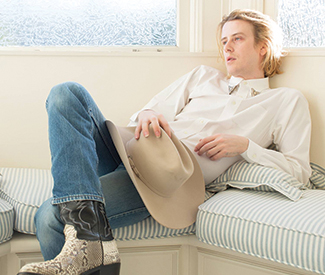 LEFT OF THE DIAL Christopher Owens, San Francisco resident, has a problem.

It’s one of those problems that maybe doesn’t sound like a problem to people who didn’t achieve critical darling status in the artistic industry of their choice by age 30, but it is a problem nonetheless. The problem is that Girls, his old band, was a very, very good band that wrote complex but catchy, rocking but intimate songs, drawing from ’80s power-pop and ’60s doo-wop and orchestral rock to talk about breakups and his escape from a deeply complicated childhood ensconced in the cult-like Children of God sect of Christianity. Girls was instantly, recognizably, good — in a way that seemed, on first listen, to stem from very little effort, though the depth of Owens’ confessional songwriting forced you to understand otherwise if you spent 30 seconds thinking about it.

The Christopher Owens problem is that after two albums of very good music by his very good band, the band broke up and he decided to go it alone, and not everyone was impressed with the result. Lysandre, Owens’ debut solo work, released in January of last year, was a concept album, full of proggy theatrical flair and flute solos. It had moments where it shined, but it was not the seamless work we’d come to expect from the songwriter; Owens himself later admitted he just sort of had to get it out of his system.

Is it a safer record than his previous effort? Sure. Does it follow more conventional Americana-pop rules? Yep. Does he sound like he’s having more fun actually making the music? Hell yes.

It’s that sense, actually, that seems to be confusing and alarming critics left and right (to an amusing degree, if you were to read, say, a dozen reviews in a row.) Christopher Owens seems happy. The Christopher Owens? He of the loaded religious upbringing, who made a name writing incredibly well-crafted songs about doomed relationships? How could he?

“That reaction has definitely surprised me,” the 35-year-old says with a laugh. He’s a little weary from doing press interviews all day from his home in SF when I catch up with him by phone about a week before the record comes out, but otherwise seems like he’s in good spirits.

“For one, the writing spans about four years, so it doesn’t make sense to paint it as a ‘Oh, he’s happy now,’ type of thing. Yes, I’m grateful for a lot in my life right now.” (One can’t help but think his stable, long-term relationship and relatively recent sobriety have played a part, though he doesn’t really want to discuss either topic.)

“I would never set out to make a ‘positive record,’ but I’m glad it’s having that effect on people.” He thinks a moment. “I also think that’s maybe just the sound of a lot of people working together who like each other very much, having fun.”

Those people include producer Doug Boehm, who produced Lysandre, as well as Girls’ acclaimed second record, Father, Son, Holy Ghost; the band also includes a keyboardist, drummer, and guitarist who played on that Girls album. Other people — like gospel singers Skyler Jordan, Traci Nelson, and Makeda Francisco, who provide backup on “Stephen,” a weighty, cathartic elegy of a song for Owens’ brother who died at age two — were instrumental in how Owens selected tracks once he decided this was going to be his country record. (He has hundreds of songs and half-songs to choose from, written and stored away on his computer at home.)

The overwhelming influence of gospel — not to mention the biblical record title — will likely come off as something of a wink to longtime Owens fans; his struggle to reconcile his ultra-religious upbringing and the tumultuous period of his life that followed his leaving the church at age 16 are both well-documented.

But the reference isn’t quite so straightforwardly tongue-in-cheek, says Owens. Gospel, in particular, has come full circle for him.

“I’ve had a long history with spiritual and religious music,” he says. “We weren’t Pentecostal, but it was still about asking God to take away your burdens. There’s a desperation to it, a genuineness and earnestness.

“If you talked to me about gospel music in my teens I would probably have been very disparaging, but as I got older and calmed down more in my 20s, I started appreciating it as music,” he says. “The fact of, we’re going to sit around and sing together, and what that does to the energy in the room.”

It was in his early 20s that someone gave him a record by the singer Mahalia Jackson, known as “the Queen of Gospel,” also known for her contributions to the Civil Rights movement. The gift was almost as a joke, says Owens.

“Knowing my history [with religion], it was ‘Here, Chris, you’ll like this,'” says the singer. “But I remember realizing, this woman is fantastic. So it’s been about coming to a place where I can see the value in the music itself, which I think is part of the point. ‘Let us make a joyful noise unto the Lord.’ And as I started to write and play music myself, it’s been about figuring out a way to do that with a non-religious quality, how to strip the music of its religious associations. I’ve listened to a lot of Elvis’ gospel albums…

“If you’re from the Ukraine and you walk into a gospel church, even if you don’t understand the language, you’re still going to get goosebumps,” he continues. “There’s still power in the sound.”

As for the Christopher Owens problem: Judging by early reviews, he’s appeased some Girls fans who were left cold by his first solo effort. Not that he puts too much stock in other peoples’ opinions of him. He’s happy with the record. And yeah, he admits, he is happy, in general, at the moment. And yet:

“It’s kind of funny that people are thinking of the record like that. Because even when you have these blessings, life always goes both ways. I think life is an uphill climb,” he says. “If you’re climbing the right way.”

With The Tyde and Carletta Sue Kay