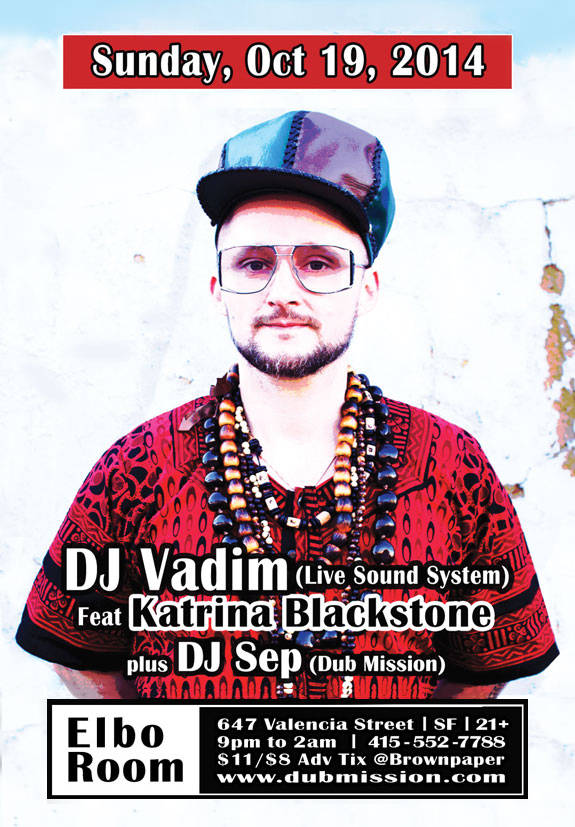 9 pm to 2 am – $11 Door / Limited $8 Advance tickets at www.djvadim.brownpapertickets.com

Win tickets by emailing RSVP@sfbg.com with ‘VadimSF’ in the subject line.

Born in Russia and residing in London and Berlin, DJ Vadim aka Daddy Vad has built a reputation as one of the world’s top independent producers.In a career that spans 20 years, he has travelled in over 68 countries, performing and collaborating with established and developing talents acrossContinents, languages and cultures. Vadim founded his own independent record label, Jazz Fudge in 1994, and signed to Ninja Tune the following year.He sticks to no rulebook, hi musical repertoire encompassing hip hop, trip hop, soul, funk, grime, reggae, dub and bass. Vadim has produced numeroussolo and group albums across genres for labels like Ninja Tune, Jazzfudge, Wordsound and BBE., working with artists like DJ Krush, Stevie Wonder,The Roots, Prince, Public Enemy, Dilated Peoples, Kraftwerk, Sly and the family stone, Fat Freddy’s Drop, Super Furry Animals, and Paul Weller. Hehas formed and produced a number of groups including The Bug, The Isolationist, The Russian Percussion, and One Self and The Electric. In 2002,Vadim was nominated for a Latin Grammy for his work with 7 Notas 7 Colores. Always innovating and pushing the boundaries, he has delved into thebroadcasting world. with his own radio show “Around the World in 8 Relays” which is aired by the BBC World Service and was nominated for a SonyAward. His latest release, Dubcatcher, is informed by classic roots music, 80s digital, bashment, original UK 2 step soul, bass culture and featurespowerhouse vocalist Katrina Blackstone, YT, Demolition Man, Jamalski, Dynamite MC and many others.www.djvadim.comwww.soundcloud.com/dj-vadimwww.mixcloud.com/DJVadim/Katrina Blackstone has been singing since she could speak and has not stopped! Whether, it was singing for friends and family, or performing onstage, she had no doubt, what she wanted to do. “I feel more comfortable being on stage than walking down the street” proclaims the Tennessee-bornvocalist. Anyone who has witnessed her, on stage would agree. She takes the mic with ease, connects with the audience, naturally, and always deliversa memorable show. Katrina studied vocal performance, with an emphasis on Jazz at the prestigious New School University in New York., Her professionalfoundation draws from the teachings of such greats as Junior, Mance, Amir Ziv, Bobby Sanabria, and Kate Baker, to name a few. This widely eclectic,group of teachers, along with numerous performance opportunities and unique life, experiences, has enabled her to cultivate her distinctive voice andexceptional, stage presence. Living in NYC, Katrina started her diverse recording career with, Jazz and Soul legends Ron Carter, Brian Jackson, and MikeClark for the album, “Legba’s Light” in which she is featured on the song “Whisper” with Killah Priest., She has been featured on Bluetech’s albums, LoveSongs to the Source (Interchill), and Rainforest Reverberations (Critical Beats), dr Israel’s The Liberation Chronicles, (Dreadtone International), and Live atDub Mission SF which was recorded at our 14th Anniversary. Katrina has toured with a diverse group of musicians including, Shootyz Groove, the PrimoGomez project, Bluetech, Satori Social, and dr Israel., With her debut 2010 EP, Passing Time, Katrina made a grand entry onto the futuristic, pop-soulscene, as her voice glided effortlessly over multiple genres. Her exquisite, phrasing and passionate delivery still retain an air of mystery.www.facebook.com/katrina.blackstonewww.reverbnation.com/katrinablackstoneDJ Sep is the founder, promoter, and main resident DJ at Dub Mission. For 22 years, Sep was also on Bay Area radio: first at college radio station KUSFand later at Berkeley’s public radio station, KPFA. She is the co-compiler (with producer/dj Shockman) of Babylon Is Ours: The USA in Dub, a collectionof all-exclusive American dub tracks released on Select Cuts Records. Her latest projects, the Biggering Riddim, an EP of original music featuring dr. Israeland Mista Chatman; the BASSment mix, and Reggae Got Dhol featuring refixes of tunes by Gregory Isaacs and Lady G are all available onwww.soundcloud.com/djsepwww.facebook.com/DJSep1Now in its 19th year, Dub Mission is one of the longest-running parties in the world, presenting cutting-edge dub, roots reggae and dancehall every Sundayat the Elbo Room. Voted Bay Area’s Best Reggae Club by S.F. Bay Guardian readers Dub Mission has featured artists from all over the world, including AdrianSherwood & the ON-U Sound System, Mad Professor & the Ariwa Sound System, the Scientist, Mungo’s Hi Fi, Soom T, Solo Banton, Jahdan Blakkamoore,Zion Train, Prince Fatty Sound System, Twilight Circus Dub Sound System, Nickodemus from Turntables On The Hudson and many many others.Every Sunday at Elbo Room:www.dubmission.com@djsepdubmissionwww.facebook.com/DubMissionSFwww.youtube.com/dubmissionwww.soundcloud.com/dubmissionsfwww.instagram.com/dubmissionsfwww.google.com/+DJSEP