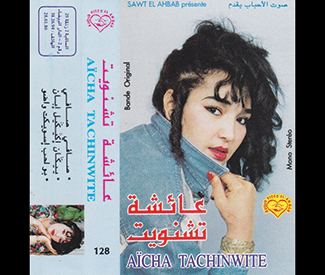 SUPER EGO “The ‘cassette as retro fetish object’ thing is super-boring to me, because I never really stopped listening to tapes!” Brian Shimkovitz, aka Awesome Tapes From Africa, told me by email. (He’ll perform at the awesome Push the Feeling party Sat/4.) “People seem very happy when they see me DJing cassettes, and I know it seems gimmicky or funny but it really just makes sense to me in bringing the blog into a live context. I have so much fun DJing this way, and it forces me to find a creative way to present the music for the dance floor without changing the music itself.”

When it finally comes time to ask of the Internet, “Was it worth it?” Shimkovitz’s 8-year-old Awesome Tapes From Africa blog (www.awesometapes.com) will surely serve as major affirmation. It’s exactly what it sounds like: He travels around Africa, collecting cassettes from street vendors, record stores, and fortuitous twists of fate, then posts an audio file of each track on his blog. (His label reissues some of the albums in their entirety.) As a DJ, he mixes many of those cassette tracks in the club to ecstatic dancers.

“I have recently come across some gnawa music from Morocco by Saha Koyo that made me rethink what was possible with that genre,” Shimkovitz, who owns more than 4,000 cassettes, said, listing off his latest finds. “It’s a very trance-like, static music — this tape made me think it could be something even more exciting. I’ve loved, loved, loved Nigerian fuji music the last couple years. And I am getting into Ethiopia Gurage music — I like anything that has to do with rap in pretty much any language.”

Highlife, hip-life, benga, tsonga disco, and soukous are also on the menu at ATFA gigs. But he’s not just scooping up delectable tapes from the African continent, but the African diaspora as well — visiting immigrant communities in New York, Paris, and beyond. “When I lived in DC, I stayed around the corner from a large Ethiopian music distributor that gave me many experiences of discovery and excitement. I’ve looked in diasporic neighborhoods in Copenhagen and Oslo. And I dream of visiting Minneapolis to go digging for Somali music,” he told me.

An ethnomusicology student who first visited Ghana on a Fulbright Scholarship in 2005, Shimkovitz is refreshingly conscious of horrid tropes of colonialism when it comes to describing what he does. (Vice cringingly called him the “Indiana Jones of African music,” for example.) “I am very ambivalent about being called anything that positions me as an expert in anything. The focus with Awesome Tapes From Africa is on bridging the gap between great music and people who would want to hear it — so in a way helping the music colonize America, Europe, etc. Because of the diversity of the continent the title of the project is necessarily clumsy. Meanwhile ATFA itself is in many ways about celebrating the diversity within each and every country.

“It’s not good for the outsider to come in and try to change things to make it more palatable to another audience. ATFA the blog has always presented the work as the artists created it, using the original album art, the complete recording, original track sequence, etc. Music speaks for itself mostly. Politically, some people find problems with me working with African music and presenting it this way, but I say it’s important to get the music heard by bigger audiences, help the musicians make some money, and hopefully get them some shows overseas.”

More incredible music from far afield — in this case the wild, whirling Roma rhythms and brass of the Balkans. This is one of the best parties in the city, with the full Inspector Gadje brass band, gorgeous bellydancng from Jill Parker and the Hamer Sisters, and DJ Zeljko. Get there early.

Beautifully deep, “satisfyingly scuzzy” techno from this Ann Arbor, Mich, innovator. He’ll be joining Vancouver’s good-vibes Hashman Deejay and Berlin’s elastic beat-man Braiden to helm the smart and sassy Icee Hot party (which just announced it will be ending in January — with a 28-hour marathon party).