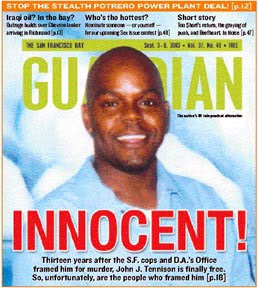 From the case of JJ Tennison and Antoine Goff — who served long prison terms before being freed after a Guardian investigation showed misconduct by the police and prosecutors in San Francisco — to the similar and most recent case of Obie Anthony, as told by Ammiano to his legislative colleagues during the hearings, prosecutorial misconduct is a serious problem that needs to be addressed.

AB 885 became a good compromise measure and it worked its way through the legislative process, in the end allowing judges to inform juries when a prosecutor has intentionally withheld evidence, an important factor when weighing credibility that is usually shielded from jurors.

But in his veto message, Brown wrote, “Prosecutorial misconduct should never be tolerated. This bill, however, would be a sharp departure from current practice that looks to the judiciary to decide how juries should be instructed. Under current law, judges have an array of remedies at their disposal if a discovery violation comes to light during trial.”

Yet the reality of the criminal justice system is that such remedies rarely get applied, particularly in cases where the defendant is a poor person of color, sometimes because judges (many of them appointed by Republican governors during shameful tough-on-crime eras) are biased in favor of police and prosecutors.

This is a problem that was ripe for a legislative remedy in country where racism and the world’s highest incarceration rates are still huge problems, and we share the frustration of Ammiano over this veto.

“I’m not just disappointed at the Governor’s veto of this bill, I’m angry,” Ammiano said in a press release. “We need so much more than this to balance the system and keep the innocent out of prison, as the writers of the Constitution intended. Most prosecutors are honorable, but we’ve seen too many cases where DA’s don’t play fair – hiding evidence or releasing it at the last minute.”

“I recently met 40-year-old Obie Anthony, who has spent nearly half his life in prison because prosecutors hid evidence that would have pointed to his innocence,” Ammiano continued. “A court has now completely exonerated him, but that exoneration has come 20 years too late. We need this bill to stop the few prosecutors whose zeal for convictions lead them to cut corners on justice. We can’t wait decades to free the innocent while the true perpetrators run free.”

Ammiano noted that while the courts have prohibited non-disclosure evidence, he said the remedies that Brown refers to are weak and rarely used. For example, in Anthony’s case, the prosecutorial misconduct resulted in just a 24-hour continuance and no disclosure to the jury.

“AB 885 could have saved me from spending 17 years in state prison,” Anthony said shortly after it passed the Legislature.

Brown is right that, “Prosecutorial misconduct should never be tolerated,” but in today’s criminal justice system — where cops and prosecutors are regularly exposed for railroading low-income defendants — it is not just tolerated, it is commonplace.