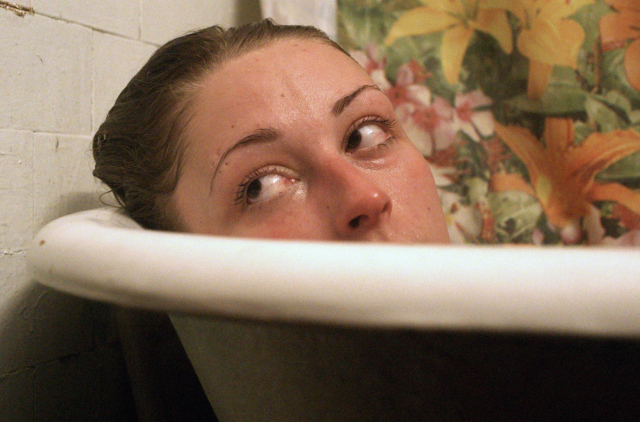 The first was instant horror classic Goodnight Mommy (Austria), which had critics tripping over each other as they ran out of the theatre. I overheard one woman hailing the psychological terror film as the best movie she had seen at TIFF in five years.

With art-porn filmmaker Ulrich Seidel as producer (see 2012-13’s Paradise Trilogy: Love, Faith, Hope), the eerie film evokes high levels of hypnotic and unspoken terror. DO NOT READ ANY SPOILERS about this fiction debut from Austrian filmmakers Veronika Franz and Severin Fiala. There is not a false note in the film and I cannot wait to watch it again and again and again.

Next up was Joshua and Ben Safdie’s visceral indie Heaven Knows What (US). Anyone who witnessed their previous panic-inducing ditty Daddy Longlegs (2010) should take note. With the determination of an early-1980s Abel Ferrara film combined with Martin Bell’s seminal homeless youth documentary Streetwise (1984), the Safdies give Heaven star Arielle Holmes a chance to reinact her real life story, in all of its abrasive glory. Also worth a mention: the ear-crushing soundtrack, brimming with sludged-out remixes of Tomita and Tangerine Dream as well as “hardstyle” favorite Headhunterz and Norwegian church-burners Burzum.

Lastly, Peter Strickland’s follow-up to his 1970s-psychedelic Berberian Sound Studio (2012) is another nostalgic throwback, this time reveling in the psychosexual castles of Jean Rollin films. The Duke of Burgundy (UK) follows the sadomasochistic relationship between two mysterious women. Like its predecessor, in this film Strickland pays a never-ending amount of attention to detail along, with multiple layers of style to burn. Along with burgeoning British retro-genre filmmaker Ben Wheatley (A Field in England, 2013), Strickland seems to polarize cinephiles. Make sure to experiment with these little-films-that-could before making any hasty decisions.

Best of the 2014 Toronto Film Fest

1. Lav Diaz’s From What is Before (Philippines)

5. Joshua and Ben Safdie’s Heaven Knows What (US)