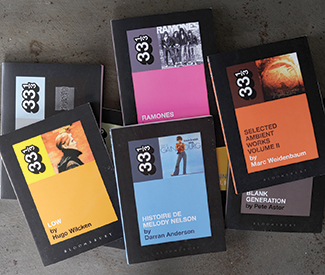 MUSIC In 2004, shortly following the Napster-fueled revolution of file-sharing, the preeminence of the album as popular music’s default narrative device was endangered. And forget vinyl; the medium had been left for dead a generation earlier. That year, though, David Barker had an idea.

In his capacity as an editor at Continuum, a modestly sized academic publisher in London, Barker launched 33 1/3: a proposed series of portable, novella-sized volumes, named for the speed of a record album, with the purpose of giving writers of all stripes an outlet with which to ruminate on an LP of personal significance, allowing plenty of room for experimentation and creative freedom.

Fast-forward to 2014, and Bloomsbury — the imprint that bought Continuum in 2011 — is celebrating 33 1/3’s 10th anniversary. Coinciding with the publication of its 100th volume, Susan Fast’s take on Dangerous by Michael Jackson, a big party at Brooklyn’s Powerhouse Arena on Oct. 2 will feature discussions with past writers, all to commemorate the series’ now-sweeping archive of critical analyses, making-of’s, memoirs, and even fiction.

In a musical landscape that has learned to embrace vinyl all over again (sales have more than quadrupled in the last decade), the series has single-handedly built a market for long-form music journalism that hadn’t existed before its arrival.

The impetus for 33 1/3’s creation came shortly after Barker, who “grew up in the 1980s on a hardcore diet of the NME and Melody Maker,” moved to NYC from London, and found himself deeply underwhelmed by the music sections at even the most world-class independent bookstores.

“There seemed to be such a lack of anything approaching interesting analysis,” Barker told the Bay Guardian. “Lots of decent biographies, lots of mediocre ones, and not much else. So the series was really an attempt to create a space where writers and readers who love music could meet to express and share opinions and try out different ways of writing about music.”

Reaching far beyond the dry, biographical style of most music-oriented bookstore fare, and mass-market publishers’ tendencies towards major artists like U2 and Jimi Hendrix, Barker set out to address canonized albums (The Beach Boys’ Pet Sounds; James Brown’s Live at the Apollo) and niche classics (Van Dyke Parks’ Song Cycle, Throbbing Gristle’s 20 Jazz Funk Greats) alike, written with a rabid fervor that the record-collector contingency could get behind.

It’s worth noting that although Continuum and now Bloomsbury have thrived on a scholarly reputation, the selection process for new volumes in the 33 1/3 series — an annual, monthlong open call for proposals — is quite egalitarian in its approach.

“It’s just amazing to read proposals from such a massive range of people,” Barker said. “High school students in the US, scholars in Australia, musicians in Scotland, journalists in Canada, and so on.”

Encompassing critics, superfans, and musicians such as The Decemberists’ Colin Meloy (who dissected the Replacements’ Let It Be) and John Darnielle of the Mountain Goats (who took on Black Sabbath’s Master of Reality), 33 1/3’s base of writers has come to resemble a group of music-lovers more than a pack of scholars. In addition to producing some first-rate accounts of crucial albums and their respective recording processes, this approach has resulted in some volumes that’ve ventured off the deep-end of “criticism” into something else entirely.

Kevin Dettmar used Gang of Four’s Entertainment! as a springboard from which to explore Marxist theory, while Darnielle took his favorite Black Sabbath album into fictional territory, with the account of a 15-year-old boy trapped in a mental institution. LD Beghtol responded to the Magnetic Fields’ 69 Love Songs with an encyclopedic, alphabetical rundown of paragraph-long snippets, while Douglas Wolk framed James Brown’s Live at the Apollo with Cold War politics, flipping between that legendary night in Harlem, and the peak of the Cuban Missle Crisis.

“It was always intended to be experimental,” Barker said, “and for the pool of writers to include journalists, novelists, musicians, broadcasters, and anyone else who had a story to tell about a record they loved.”

However, according to Ally Jane Grossan, who assumed the duty of series editor after Barker moved back across the pond, the 33 1/3 series is set to take on its first non-album entry, opening the door for a whole new set of possibilities.

“Andrew Schartmann proposed a volume on the ‘Super Mario Bros.’ soundtrack (yes, the video game) during the last open call,” Grossan said, “and my first thought was ‘That’s not exactly an album.’ I quickly banished that thought and replaced it with, ‘Actually, this book is going to be amazing. Here’s a musicologist and passionate composer writing about one of the most important and revolutionary pieces of music in the 20th century.’ If that’s not a ’33 1/3,’ I don’t know what is!”

Thanks to the relative success of independent booksellers (with large chains disappearing), and the new resurgence of vinyl heightening the cult appeal of small record stores, the 33 1/3 series has found a proprietary niche in between the musical and literary worlds over the past 10 years, delivering a level of in-depth analysis and reflection that Internet-based writing has mostly failed to reach.

Just as Barker and now Grossan have approached the series as a love letter to the ritual of record collecting, and to the narrative cohesion of the album format, a certain breed of music-lover has come to fetishize the 33 1/3 brand in a similar way — stacking the sleekly packaged volumes on his or her bookshelf with the same care and sentimentality that defines a lovingly curated record collection. In a culture of music driven by the immediate, if ultimately insubstantial, delivery system of the Internet, 33 1/3’s arrival at the 10-year mark is a testament to the collector in us all.