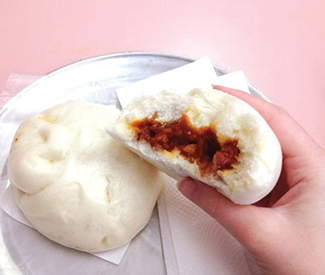 For our staycation food tour, stretch and saunter sleepily down Clement Street. The sun is rising and the fog is low, but Toy Boat Dessert Café (401 Clement) is open early. Your creamy cup of coffee is accompanied by a cavalcade of toys, from Pee-wee Herman’s Chairy to Buzz Lightyear. The joint is a people-watching feast, as elderly couples canoodle and tiny tykes buck on the café’s mechanical horse.

Duly caffeinated, jitter on to breakfast. The fancy route leads to Eats (50 Clement). Chomp the fluffiest waffles in the Richmond, or order any skillet-bound breakfast and chew slowly, savoring every spicy sensation.

Should your stomach growl for bigger portions, the Irving Street Café (716 Irving) serves up mighty omelets and keeps the coffee pouring. It’s tastier than most greasy-spoon diners, and one’s hunger is easily conquered for under ten greenbacks. The old-school atmosphere (and signed Chris Isaak poster) encourages one to hum rock ‘n’ roll.

As the morning fog burns off and that lunch bell clangs, head to Uncle Boy’s (245 Balboa). Any ’80s-’90s hip-hoppers will bop right at home here, as the chefs flip their heads with a well-met “yo.” Check out the cool Niners schwag as your Pool Boy burger juicily bursts under the slatherings of chipotle sauce. The garden patties handily convert die-hard meat lovers.

Not feelin’ burgers? Drown your tortilla desires in the Taco Shop at Underdogs (1824 Irving), where the fish tacos — imported from Nick’s on Polk — perfectly complement all the beer you’re about to chug.

As evening hits, Karl the Fog slowly caresses the ‘hood again. Hop the 31 Balboa to 19th Avenue, where the unassuming Han Il Kwan (1802 Balboa) awaits. Mind your drool as the waitress slices succulent beef from its bone for your stew. Hankering for Russian fare? Head to Cinderella Bakery & Café, though the delicious stuffed Chicken Cutlet a la Kiev isn’t the star (the side of freshly baked rye bread steals the show).

This tour is only a sampling, and many local favorites await (we didn’t even get to any sushi!). But for non-Richmond or Sunset dwellers, sailing into the misty sea-soaked western neighborhoods can be like landing in an entirely different city where hundreds of new tasty eateries await. Just remember to wear your hoodie. *