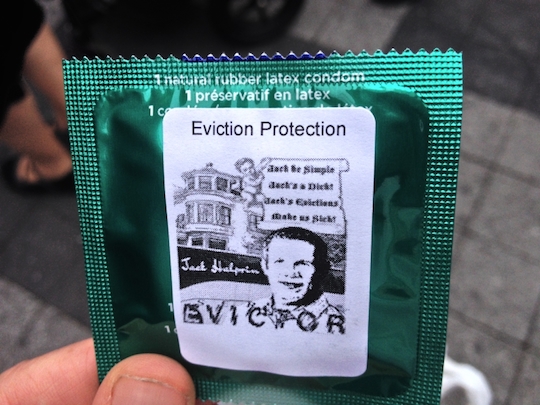 Now you can don rubbers against evictions.

Activists engaged in eviction “protection” of a different sort this Sunday at the Folsom Street Fair, as they handed out condoms with packages adorned by the face of Ellis Act evictor, Jack Halprin.

No doubt much boning ensued after the kinky leather fetish fair, and some of those copulations may have utilized the Halprin-condoms. But why are the protesters equating him with a rubber ejaculate receptacle?

Halprin, a Google attorney and head of their eDiscovery division, purchased a San Francisco property at 812 Guerrero two years ago. Eight units in the building were occupied, but Halprin filed to evict the tenants under the Ellis Act. One of those tenants is a San Francisco elementary school teacher Claudia Tirado, who lives there with her 2-year-old son. Like the rest of us, teachers have had a hard time keeping their San Francisco homes as of late.

This put Halprin on Eviction Free SF’s naughty list (remember the Google I/O conference protest? That was Tirado too). But that doesn’t explain the Folsom connection.

Eviction Free SF said in a press release that Halprin regularly frequents Powerhouse SF and is part of the leather community, which we confirmed by checking out Halprin’s “likes” on Facebook (he also digs the Eagle, for the record). The protesters implored the leather community at the Folsom Sreet Fair to denounce Halprin’s eviction of San Franciscans, chanting “sex positive, evictions negative!”

Now we were at Folsom, and the shouts weren’t exactly creating a ruckus at the fair (between the delightful bondage demonstrations and Jamie DeWolf emceeing a nun-laden burlesque show, everyone was a bit distracted). But the true condom-breaking moment took place back in June, shortly after the Google I/O conference, which Tirado protested. After Google was shamed internationally the company promised, ahem, protection for Tirado and her fellow tenants.

We offer you Eviction SF’s limerick, on the condom package, without comment: