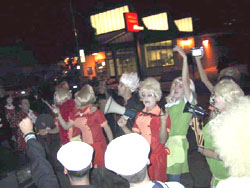 In strut a gaggle of rough and ready queers, me included, part of Guerrilla Queer Bar, to shake things up and sprinkle a little unicorn rainbow dust (and wig hair) on the proceedings. Web 1.0 was in full effect, queers were losing their spaces, and so we wanted to “take it back” by invading “straight” neighborhoods and wreaking a little lavender havoc — you know, to even things out and have fun. It was kind of the original flashmob, spread only by the limited social media of the time (i.e. email listservs).

And that’s when the shiny-cuffed bro pulled out a $20 and told me to make out with his male roommate so he and his friends could watch. “We’ve never seen two guys make out in real life!” he said. I didn’t know whether to be flattered or insulted, but damn right I took his money stright up, and cultural experiences were shared all ’round.

Now, just in time for Folsom frolicking (most of it restricted to Soma), GQB is back, but in a much more global-reaching form called “Pop-Up Gay Bar,” still intending to challenge assumptions gay and straight in unexpected neighborhoods, while downing some yummy cocktails and making new friends. The next one will take place tomorrow, Fri/21 — sign up at the link above to get the details! Let’s take some queer leather and love to the normals.

I talked to Brian McConnell, Pop-Up Gay Bar organizer (along with Sister Selma Soul and a few others).

SFBG What prompted you to reactivate GQB  — and in this new form?

One was going to eastern Tennessee a couple of months ago for my grandfather’s 95 birthday. This is in serious Appalachia (Smokey Mountains etc). Before I left, I stopped at a sports bar near the regional airport, and overheard the bartender talking with customers about his BF, etc. Twenty years ago you’d get beaten to a pulp, and then the cops would laugh at you for being a faggot. So obviously things have changed a lot, even in redneck country. It’s not the Castro, of course, but clearly things have improved, at least to the point people feel comfortable being more open now.

The other thing motivating me is I feel like the trend of everyone moving to the city is about played out. Yes, we’d all like to live in a cute house in a cute neighborhood, etc, but there’s only so much space, and the people who are already entrenched don’t want to move. So I think there are going to be a lot of people bypassing places like SF for other places. I moved here in 1994, partly because being gay and spending a lot of time in the South I was tired of that climate, and partly because I grew up around computers. At the time, it was really the only option professionally and personally. If it were today, I don’t know that I’d feel the same way about SF. It’s still a great place, but I don’t think the pull is as obvious now. What was a no-brain decision is less so now. (For context, I thought $800/month for a crappy 1 BR in the Tenderknob was expensive).

SFBG Who is all involved in the reboot, and have you launched in other cities yet?

We’ve heard from people who are interested in organizing events in Marin/Sonoma, a guerrilla transgender event in East Bay, Baltimore and Harlem. The Pop Up Gay Bar system is set up so organizers can send email to people in their vicinity. It’s a location aware email listserv that I built. We’re letting it develop organically outside SF, since we noticed that GQB was different in each city it spread to.

BM “Priscilla Queen of Walnut Creek” (Green Tortoise bus caravan to the East Bay). I remember Peaches Christ driving around a Safeway in one of the granny carts announcing “I need a price check for a rump roast.”

Saint Patricia’s Day. These two Irish tourists emailed us in advance of their trip to ask if we could organize something for them. At first we thought this a bit presumptuous, then realized they’d be here in March. So we organized a Saint Patrick’s Day parade two weeks early in Chinatown and made them the grand marshals.

SFBG Have you finalized this year’s location — and are you encouraging people to wear leather?

BM People can sign up at the site to get the information sent to them. On the record, we’re headed to Union Square, think of SantaCon with chaps. And yes, we are encouraging leather, or clowns, or whatever freak flag people want to fly.

SFBG What do you think the biggest challenges for queers are right now, both in the Bay Area and the country at large?

BM I think in general there has been a loss of LGBT space. Even in SF, gay bars have been disappearing (most recently Esta Noche), and there’s hardly anything here for lesbians. Outside SF, you’re lucky if there’s a place within an hour’s drive. So we’re hoping PUGB will spread, and that even the smallest towns will use it or something like it to create local space.

SFBG Should we bring our own girly drink to the pop up? Because what if there’s only beer.

BM You should always bring a flask.

While we definitely plan to have fun around SF, this time around its much more about getting this rolling everywhere, even places like Morristown, TN. That would be a good SF export in my opinion, and it is the kind of thing SF is good at starting.